Though he faced discrimination there, Ambedkar was indebted to Sayajirao Gaekwad III Cementing a legacy: The Ambedkar memorial in Baroda is nearing completion | Jaydev Rana

In 1950, 11 years after Sayajirao Gaekwad III of Baroda died, B.R. Ambedkar wrote to the then ruler of Baroda Pratapsinhrao Gaekwad, saying that he wanted to write about the life of the late ruler.

The desire remained unfulfilled, probably because of Ambedkar’s failing health, but the four-page handwritten letter spoke volumes of Ambedkar’s reverence for Sayajirao. “He was my patron and architect of my fortune,” read the letter dated October 10, 1950. “It was he who gave me the higher education that has enabled me to reach the high status I occupy today in public life.”

A pioneering force in the movement for girls’ education, removal of untouchability and widow remarriage, Sayajirao gave Ambedkar Rs25 a month to study at Bombay’s Elphinstone College. Later, for his stay at Columbia University, the ruler gave the scholar ￡11.5 a month. Ambedkar did his master’s in arts with a specialisation in economics. He later studied at the London School of Economics, too.

“I owe a deep debt of gratitude I wish I could adequately repay. The only way I could do is to write his life,” Ambedkar had written.

A firm believer in education for all, Sayajirao had opened special schools for dalits as the other communities refused to study with or even teach them. To help with this, Sayajirao brought Atmaram Amritsari, an Arya Samaj member, from Punjab, who would go on to help Ambedkar personally.

Sayajirao had already implemented ideas such as girl-child education and social equality, which later found mention in the Constitution that the Ambedkar-led committee had drafted. “Sayajirao had a tremendous influence on Ambedkar’s life and it reflects in his works,” said Thakorelal Solanki, a dalit rights activist in Baroda. “It is Baroda that gave Ambedkar to the country.”

Samarjitsinh Gaekwad, the current maharaja, told THE WEEK: “Sending Babasaheb abroad was incredible and he later played a major role in shaping the country. My great grandfather knew education could uplift the country. Three people from Baroda were involved in the drafting of the Constitution. We also see Nandalal Bose’s drawings in the Constitution. It is in Baroda that Ambedkar interacted with Bose.”

Ambedkar’s stint in Baroda was divided in two―one after his education in Bombay and the other after he returned from abroad. The first stint in the Baroda army was only for a couple of days as he had to return to Bombay to take care of his ailing father. The second was just over a month, and featured several episodes of discrimination.

Ambedkar was not allowed to enter a club that the Marathas and Brahmins patronised, said Bansidar Sharma, former head of the Hindi department at M.S. University of Baroda, who has written books on Sayajirao.

As for his stay, Ambedkar had found a house owned by a Parsi in Fatehganj. “It is believed that the watchman asked Ambedkar to change his identity, which he did,” said Sharma. “However, those working for the king somehow passed on the message about Ambedkar’s caste to the house owner. He was shown the door.” A commercial complex has now come up at the place.

There have also been accounts of Ambedkar not being given water in the communal vessel, files being dumped in front of him and carpets being rolled up when he came to office. 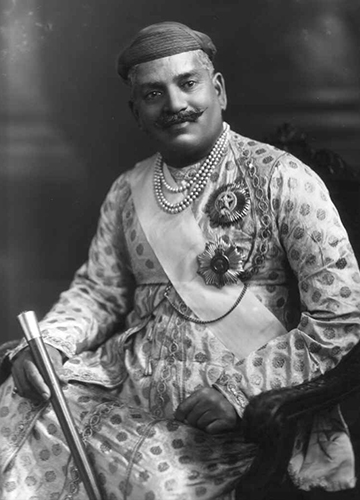 “Babasaheb felt really bad when he faced discrimination at the workplace and he did not even get a place to stay,” said Solanki. “This was in sharp contrast to the experience he had in the western world. He was hurt that this could happen to an educated person like him.”

Sayajirao, though, was cautious in dealing with the situation. “By wielding power, he did not want to increase the discontent,” said Sharma. “The situation was sensitive and he had asked Ambedkar to be patient.”

There were a lot of limitations when it came to implementing social reforms, said Anant Patel, an Arya Samaj member who works at an ashram where Amritsari stayed in Baroda. “Sayajirao was a reformer and what he did was really credible,” he said, adding that it took a few years to make people of various castes eat together.

Added Gaekwad: “Discrimination was prevalent. The fact that Sayajirao gave scholarship to Ambedkar demonstrated the way he looked at the whole situation. There could not have been an example more forthright.”

To celebrate Ambedkar’s connection with Baroda, the Gujarat government had announced a Rs10 crore project in 2015. It included a stupa-shaped memorial of over 3,800sqm, some distance from the banyan under which Ambedkar reportedly took an oath to fight for equality. The project, which also features a digital exhibition and amphitheatre, is nearing completion.

Apparently, it was Solanki and a few others who identified the banyan. Ambedkar, having faced discrimination, had vowed to leave Baroda in September 1917. However, his train was running late and he went to Sayaji Baug (a green zone in the city) and sat under the banyan. “Based on the description of the place mentioned in the books, I located the tree,” said Solanki. “There was no other banyan near the hanging bridge.” In 2010, the tree fell in a flood; its saplings were planted at the same spot.

The place, called Sankalp Bhoomi, is frequented by political leaders and followers of Ambedkar. Under the tree are two small photos of Ambedkar; a statue is said to be in the works.

Notwithstanding the “indifferent” experiences he faced during his short stays in Baroda, Ambedkar always remained indebted to Sayajirao.