How Ambedkar's family supported him in his journey

His family stood by him, silent and steadfast, as he created history 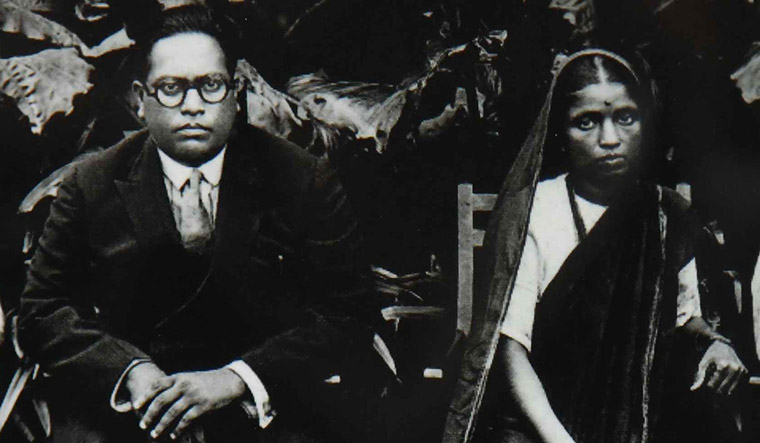 One soul saw the other soul, both recognised a common identity,” wrote Dr B.R. Ambedkar in a letter to Dr Sharada Kabir, his soon-to-be second wife, as they shared a common interest in Buddha’s teaching. “This is how our hearts met,” recalled Sharada Kabir―rechristened Savita after her marriage with Ambedkar―years later in her autobiography.

It was not an easy match. Savita said there were three issues they had to deal with in their marriage. First, she was a Saraswat Brahmin, while Ambedkar belonged to the most-deprived Mahar caste. Second, the 18-year age gap between them. Third, Ambedkar’s many illnesses―diabetes, high blood pressure and joint pain.

“But neither our different social backgrounds, nor the difference in age nor again his ill health and his chronic illnesses came in the way of our marriage. The doctor in me was aroused to boundless sympathy, and I accepted Dr Ambedkar’s proposal of marriage,” Savita wrote in her autobiography, Dr Ambedkaraanchya Sahavaasaat (1990), which was translated into English and titled Babasaheb: My Life With Dr Ambedkar (2022).

Ambedkar was looking for a caregiver, but found a companion in Savita instead. Nearly after a year of knowing each other, they got married on April 15, 1948, a day after Ambedkar’s 57th birthday. They were together for nine years till Ambedkar’s death on December 6, 1956.

But being Ambedkar’s wife was not easy. After his death, some of his followers accused Savita of killing him. A rift was created between Ambedkar’s son from his first marriage, Yashwant, and her over who would carry forward his legacy. The government of the day even probed Ambedkar’s death, eventually declaring he died of natural causes. Savita lived a life of obscurity for 14 years before being brought back into dalit consciousness. Ambedkarites called her Maisaheb. She died at the age of 93 in 2003.

While Savita played a key role in the later part of Ambedkar’s life as he became chairman of the Constitution drafting committee, the first law minister of the country and embraced Buddhism, his first wife, Ramabai, was instrumental in taking care of the family even as Ambedkar went abroad for higher studies. Ambedkar’s father and grandfather were both in the Mahar regiment of the British Indian army. Even his maternal grandfather and uncles were in the army. This created an enabling environment that laid the foundation for his later success. The military service improved the social status of Ambedkar’s caste.

Ambedkar―the youngest of 14 children born to a subedar―married Ramabai when he was 15 and she eight. They had five children, but only Yashwant survived. While Ambedkar was abroad, Ramabai struggled to feed her children. “I was pained to know that Gangadhar (son) was ill,” Ambedkar wrote to Ramabai in 1921. “Have faith in yourself. Worry would lead to nothing.... I am also on the verge of starvation. I have nothing to send to you but I am trying to arrange something. If it takes time or if you have nothing left, sell off your jewellery to run the household.”

Ramabai, whose life was all about sacrifice and suffering, liked visiting temples; Ambedkar would dissuade her so that she would not be humiliated for her caste. She died at the age of 37. Ambedkar ensured that she was cremated as per Hindu customs, though wearing her favourite white sari instead of the traditional green. He then retired to his room and wept all night.

After Ambedkar’s death, Yashwant devoted his life to Buddhism and ensuring social justice. He had four children―Prakash, Rama, Bhimrao and Anandraj. Prakash is president of Vanchit Bahujan Aghadi, which recently tied up with Uddhav Thackeray’s Shiv Sena in Maharashtra. Rama is married to academician Anand Teltumbde, who was arrested in the Bhima Koregaon case. Bhimrao is working president of The Buddhist Society of India and president of Samata Sainik Dal, a social organisation. And, Anandraj is president of the Republican Sena, a political outfit.