Sulekh says rationalism and self-respect should be India's guiding lights 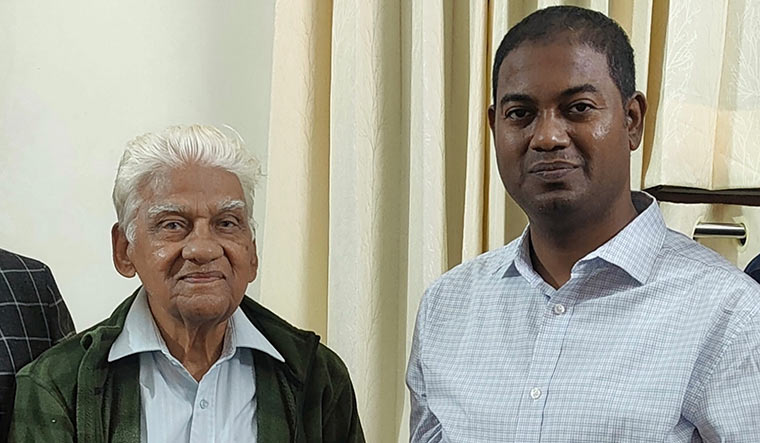 From Ambedkar’s final speech in the Constituent Assembly.

Kartar Chand Sulekh, 22, was in the visitors’ gallery of the Constituent Assembly on November 25, 1949, when B.R. Ambedkar gave his final speech as chairman of the Constitution drafting committee. “It was an electrifying moment, and the memories are still fresh in my mind. After he finished his speech, there was a sense of happiness as a new nation was being born,” recalled Sulekh, at age 95.

Sulekh had come to Delhi from Jalandhar with Seth Kishan Das, president of the Scheduled Castes Federation, to meet Ambedkar. It was then that he learnt that Ambedkar was going to speak. “We got the passes from his home, and attended the session. There was pin-drop silence as he spoke for nearly an hour and a half, stopping only once to take a sip of water. When his speech ended, prime minister Jawaharlal Nehru was the first to shake hands with him, showing great warmth. Other members also congratulated and embraced him. The rigorous debates of drafting the Constitution were left behind as everyone was hopeful of the future. Thumping of desks continued for several minutes,” said Sulekh, who now lives in Chandigarh.

Sulekh had met Ambedkar several times at his 1 Hardinge Road residence in Delhi. Hardinge Road is now Tilak Marg, and the house is occupied by the Polish ambassador to India. It was here that Sulekh first met Ambedkar as a member of a delegation of the Scheduled Castes Federation, two days before the assassination of Mahatma Gandhi.

“The secretary of our organisation was nervous to speak to such a towering personality. He wanted Ambedkar’s help to end the discrimination we faced in Punjab. Even the women were not safe. But before he could finish, Ambedkar got very angry, saying that we should not remain weak, but should respond to atrocities. ‘You Punjabis are well fed and powerful, why don’t you answer back and break the legs of those who harm your women,’ he asked. After he calmed down, he called me and I explained to him our problems,” Sulekh said.

Sulekh was in the visitors’ gallery again when Ambedkar tendered his resignation as Union law minister in 1951, citing constitutional morality, after he was prevented from bringing the Hindu Code Bill. As an eyewitness to the birth of the republic and the dalit movement, Sulekh said, “The Constitution is a robust document which has provisions for all. But Ambedkar’s dream is far from being realised. He dreamt of a casteless society as stated in the Annihilation of Caste, but the divisions are still there and are only getting stronger.”

Ambedkar’s contribution to nation-building is enduring. The world’s lengthiest constitution he drafted over three years is a dynamic document, yet a resilient one. Serving the diversity of India, it has had 105 amendments, making it one of the most amended charters. Yet, its ‘basic structure doctrine’ remains the guiding principle, as upheld by the Supreme Court in the 1973 Kesavananda Bharati judgment. The court has used the doctrine to decide several crucial points of law, and to strike down many laws, including the National Judicial Appointments Commission Act.

On January 11, Vice President Jagdeep Dhankhar invoked Ambedkar to argue that the judiciary could not intervene in lawmaking. “Every constitutional institution must heed Dr Ambedkar’s observation: The Constitution can only provide the organs of the state such as the legislature, the executive and the judiciary. The factors on which the working of those organs of the state depends are the people and the political parties.” Referring to the striking down of the NJAC Act, Dhankhar said, “There is no parallel to such a development in democratic history where a duly legitimised constitutional prescription has been judicially undone.” The Congress criticised Dhankhar, saying his comments were “part of a game plan to orchestrate a confrontation”.

Ambedkar had acknowledged that while the Constitution was a good charter, people managing it could cause harm. The Constitution’s drafter-in-chief was willing to look at the pitfalls the document could cause. “It is by placating the sentiments of smaller communities and smaller people who are afraid that the majority may do wrong that the British parliament works,” said Ambedkar. “My friends tell me that I have made the Constitution. But I am quite prepared to say that I shall be the first person to burn it,” he said, in case it caused harm to anyone.

In his book on Ambedkar, Congress MP Shashi Tharoor said in order to further the goals of the Constitution, India needed strong and credible institutions. It is important to maintain checks and balances, and not allow power to centralise around one figure. “In Ambedkar’s view, one of the most important fundamental rights is embedded in Article 32, which allows any citizen to enforce his or her rights. This was described by Ambedkar as the heart and soul of the Constitution,” wrote Tharoor.

Unlike Gandhi, who batted for decentralisation, making villages the basic units of governance, Ambedkar was worried that discrimination against dalits would continue in the village structures. “What is the village but a sink of localism and a den of ignorance, narrow-mindedness and communalism? I am glad that the Constitution discarded the village and adopted the individual as its unit,” said Ambedkar. The Gandhian vision of empowering local governments was enshrined through the 74th and 75th amendments to the Constitution.

Educated in the US and the UK, Ambedkar drew inspiration from foreign countries while preparing the Constitution. B.N. Rau, adviser to the Constituent Assembly, travelled to many countries, including Ireland, the UK, the US and Canada. He prepared an initial draft which consisted of 243 articles and 13 schedules. The Government of India Acts of 1919 and 1935, too, had an influence over the Constitution.

The directive principles, which cannot be enforced by courts, were borrowed from the Irish constitution, while the concept of fundamental rights was inspired by the American constitution. The concepts of liberty, equality and fraternity came from France, and the emergency provisions from Germany. 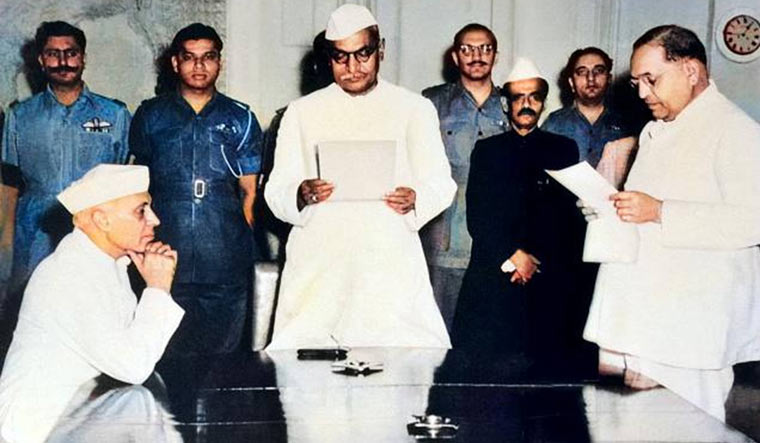 Power point: Ambedkar being sworn in as law minister by president Rajendra Prasad in the presence of prime minister Jawaharlal Nehru.

Congress leader Udit Raj said the Constitution had been weakened a lot, especially with the centralisation of power in the prime minister’s office. “There is no role for a minister or an MP,” he said. But BJP spokesperson Nalin Kohli said the differences between the political entities and institutions were a testimony to the robustness and the dynamic nature of Indian democracy. “In his last speech, Ambedkar welcomed his critics. The Constitution is an evolving and a living document. It is recognised within the Constitution that it cannot be cast in stone. That is why it has provided for amendments if there was a need to bring changes. The basic principles of the Constitution are, however, cast in stone.”

Regarding the slanging match between the opposition and the government over the manner in which constitutional bodies are handled or on the alleged subversion of certain provisions of the Constitution, Kohli said that was the nature of democratic functioning. “The BJP has not discarded any constitutional scheme. Ultimately, parliamentary democracy functions on numbers, and constitutional changes require a process in which it has to be accepted by 50 per cent of the states. Just because the opposition has a counter view, that does not mean that the BJP’s view is not constitutionally correct. The only subversion of Constitution had taken place during Emergency.”

The constitutional debate is likely to heat up again when the uniform civil code or the Citizenship (Amendment) Act is discussed. “The Constitution will prove to be good if the people running it are good. It is not the Constitution which let us down, but the people managing it,” said Vivek Kumar, who teaches at Jawaharlal Nehru University, Delhi. “The defining feature of the Constitution is its blend of rigidity and flexibility. It is not a law book, but a social text. It should be read and understood by everyone. The Constitution and citizenship should be made part of our collective psyche.”

Belgium-born development economist Jean Drèze said contrary to Ambedkar’s expectations, democracy in independent India had neither flourished nor perished. “Instead, it has limped along, burdened by the ‘contradictions’ Ambedkar identified, which are still with us today.”

While the contradictions which Ambedkar talked about still exist, Sulekh said the two main points of his philosophy should be our guiding lights―rationalism and self-respect. “There is a need to go deeper into these thoughts to realise the dream of a strong and vibrant nation.”