The diamond exists at the SMI in 3D form 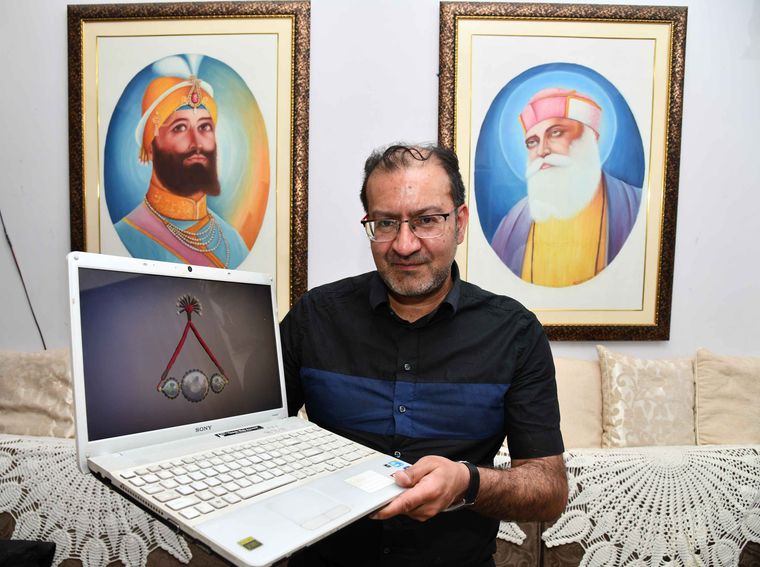 Slice of history: Gurinder Mann shows a digital version of the Koh-i-Noor, as it was during Ranjit Singh’s time | Sanjay Ahlawat

The only jewel that Gurinder Mann is not worried about is the Koh-i-Noor. It is the one item from Ranjit Singh’s toshakhana (treasury) that has a location everyone knows—the Tower of London. It is set in what is now known as the Queen Mother’s tiara. Very safe.

“In 1849, when the British took over the toshakhana, the actual Koh-i-Noor was only one item,” says Mann, who is part of the Sikh Museum Initiative in Britain. “Even if it was one of the most expensive items, it was only one item in terms of jewellery, gold, heirlooms relating to the [Sikh] gurus.”

The majority of the treasury was taken back to the UK, and the SMI, formed in 2015, has been trying to track down the items. The idea of the SMI is to create awareness about Sikh history. “We are mapping the different museums, universities and other public places that hold Sikh arts and artefacts,” he says. There has been a lot of old-fashioned detective work and a lot of knocking on doors of institutions to find out what they have in their reserve collections—even if they do not have them on display. The idea is to link these items together in a trail that connects museums.

“The Koh-i-Noor has to be part of a larger conversation of when the British came and ransacked the actual toshakhana,” says Mann. This conversation, however, is not easy to have. Nor are conversations around Empire. But Mann is trying to get started. The SMI is not alone. Across Britain there is a movement of people, especially Sikhs, searching for their roots. They want to document, interpret, preserve and understand. “We want to educate people in the UK and the world,” says Mann. “In the long run, the white population would start learning and realising that colonialism wasn’t such a great thing.”

Which is why it is not the Koh-i-Noor that fascinates Mann, it is the history. The diamond exists at the SMI in 3D form, and can be seen at a click of a button. “We can make it come alive,” he says. “We were able to recreate it in 3D. For us, we are claiming ownership because we are showing it at a time which no longer exists, which is 1849. Or earlier. (At the SMI, the diamond is shown in its original setting,; it was then worn on the arm). So people get a flavour of it as it would have been in Maharaja Ranjit Singh’s court. To me, this is better. I do not care what it looks like now. That is a long way from the historical sense.”