Can India bring back artefacts looted before independence?

India has been successful in bringing back artefacts stolen post independence

Lord Ram vanished from Ananthamangalam in 1978. He had remained at Sri Rajagopalaswamy Temple for five centuries till one day he went missing. His disappearance was more an act of fate, not faith.

An FIR was filed, but decades rolled by and his exile continued. The idols came home two years ago when the pandemic shut the world. His homecoming was not after triumphing evil in Lanka, but from across the continent— from Britain—after being kidnapped.

This is not the only idol reunited with the original worshippers. In the past five years, India has got 36 artefacts back from Australia. One of the biggest pieces is a Chola Nataraja—over 900 years old—and priced at $5.1 million. The statue had found its way to the National Gallery of Australia, and was handed over to Prime Minister Narendra Modi by Australian Prime Minister Tony Abbot in 2014. In 2021, in reply to a question in Parliament, then culture minister Prahlad Patel offered details of the 36 items recovered. Spanning centuries—from the Mauryas (321 BCE-185 BCE) to the Cholas (9th century CE to 13th century CE)—and from across the country—Andhra Pradesh to Kashmir and West Bengal­—the idols, returned voluntarily, offer a glimpse into the sheer magnitude of the loot that goes out.

The return of stolen artefacts is a part of the restoration of national pride project in India—the Modi government has turned it very much into a mission. “Till 2013, nearly 13 idols had been brought back to India,” said Modi in his monthly ‘Mann ki Baat’ in February. “But, in the last seven years, India has successfully brought back more than 200 precious idols. Many countries such as America, Britain, Holland, France, Canada, Germany, Singapore have understood the sentiment of India and helped us to retrieve these idols.”

The success is only the tip of the iceberg. S. Vijay Kumar, cofounder of the India Pride Project that has led a campaign to bring back stolen goods, while lauding the return of stolen artefacts, said that it would be merely “tokenism unless people on the ground and the law enforcement [agencies] in respective states question how these left in the first place”. “There needs to be a larger introspection that needs to be done by the government, both at the Centre and in the states,” he said.

Quite different from the loot from Robert Clive’s period—the man responsible for the word finding its way into the English language—the loot that is finding its way back to India, courtesy diplomatic efforts, is only what went out recently. If India was stripped bare as a colony, be it by the Dutch, the French or the English, in post-independent India, the pillage has continued, but through smugglers. “The main agency now is the art and antiquities market,” said Amareswar Galla, a United Nations Educational, Scientific, Cultural Organization (UNESCO) chair on inclusive museums, and founding director, International Centre for Inclusive Cultural Leadership, Anant National University, Ahmedabad. According to an assessment by UNESCO in 2020, illegal trade of artefacts was the third largest international criminal activity in the world. The illicit antiquities trade is estimated to be valued at $10 billion annually. 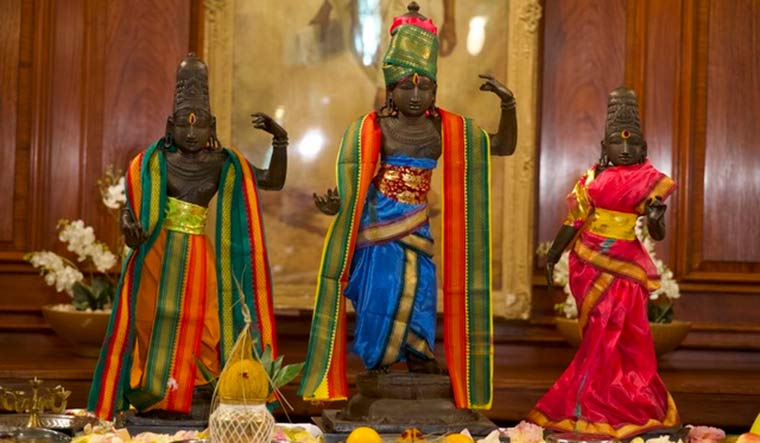 Cherished return: Three bronze sculptures returned by the UK. The sculptures were stolen from a temple in Tamil Nadu 40 years ago | AP

And perhaps, nothing beats the sheer audacity of Subhash Kapoor—an art dealer who turned out to be the biggest smuggler of recent times. He was arrested by the Interpol in 2011—five years after a tip-off by Indian customs.

Kapoor had a gallery in Madison Avenue in New York; antiquities worth more than $100 million were seized during a raid. And, 140 of the artefacts that have been brought back are very much part of this stash—just a hint at the sheer magnitude of the plunder. Among the pieces that were recovered is that of Manikkavasagar, a Hindu saint and poet from the Chola period, which was stolen from the Sivan Temple in Tamil Nadu and is valued at $1.5 million. The statue is now one of the star returnees to India—it was voluntarily surrendered by an antiques collector to the US Immigration and Customs Enforcement.

Straight out of an Indiana Jones movie, the Kapoor case is high-profile—he was extradited from Germany to India and ten years later is still an undertrial. He is by no means the only one. In 2016, Nancy Wiener was arrested from Manhattan. Her eponymous gallery was one of the most prestigious galleries in the US’s Upper East Side and supplied to major museums in Australia and Singapore. Her mother, Doris, had been credited with creating a market for South Asian art in America. In 2021, Wiener pleaded guilty to the charges. She had, as per her own admission, taken items that showed signs of looting and falsified provenance to sell them. “For decades I conducted business in a market where buying and selling antiquities with vague or even no provenance was the norm,” Wiener reportedly told the Manhattan Supreme Court. “Obfuscation and silence were accepted responses to questions concerning the source from which an object had been obtained. In short, it was a conspiracy of the willing.”

This willing conspiracy stretched across continents to include museums across the world. One of the items returned was Worshippers of Buddha, a stone sculpture returned by Australia, which was purchased by Wiener in 2007. “This was actually one of the nine objects stolen from Chandravaram in Andhra Pradesh on different occasions between October 2000 and March 2001. Within seven years of disappearance, it was seen among the exhibits in the National Gallery of Australia,” said Galla. “On the opening night, I mentioned that the sculpture belonged to Andhra Pradesh and it is a masterpiece in the Amaravati school of Buddhist art.”

Plundered from India, Cambodia and Bhutan, the loot, the investigation revealed, was sold to auction houses like Christie’s and Sotheby’s. But things may be changing. “There is much more effort on research on provenance,” said Galla. Yet very little has changed on the ground in India. “The antiquity laws are still flippant. You don’t even have a section for heritage crime,” said Kumar, who had spent years tracking Kapoor. “In Tamil Nadu, in my state, if you steal and get caught, you risk spending seven years in jail but [if you steal] from a temple you get only two years. It is such a travesty because it has the most number of temples. It has active worship.” Between 1999 and April 2010, 1,248 cases of temple thefts were registered. Only 146 have seen progress.

There is a need for documentation and digitisation of artefacts in India. The Buddhas that were stolen did not have proper pictures and the absence of awareness allowed them to slip through the cracks. There is a lot that needs to be done. The stolen art is back, but where is home really—should the returned idols be viewed as art or should they go back to being gods? “Some were not meant to be on display,” said Kumar.

So far the success that India has had with objects returned are those plundered by modern-day thieves. Repatriation of cultural goods acquired before 1970, when the UNESCO Convention on the Means of Prohibiting and Preventing the Illicit Import, Export and Transfer of Ownership of Cultural Property took place in Paris, is a different can of worms. And, successful repatriation cases are rare. The Greeks have spent decades fighting for Parthenon Marbles. The demand for the return of the Benin Bronzes (Nigeria) started in 1980s. “India has not had any success [with the] loot,” said Kumar.

This May, the Glasgow Life Museums had announced that it would return seven items. Could this be a beginning? “It is not only the British,” said Kumar. “The Danish have a collection of sculptures from Karnataka, which were illegally removed by giving betel nuts and a bag of rice, and the Danish governor—Peter Anker—spirited away 30 sculptures.”