Koh-i-Noor should be repatriated to Golden Temple, says Bansal, a councillor in UK 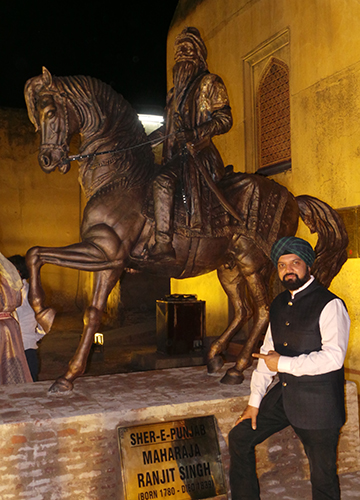 Growing up in England, I knew nothing about Sikhism. I did not know where we came from, who we were, and why we wore the turban—till 1984 happened, which was an eye-opener.

Back then, a friend shared a magazine with me. Two images on it struck me. One was of Sher-e-Punjab Maharaja Ranjit Singh, and, the other, a prince in exile—Maharaja Duleep Singh. As I started reading the magazine, I discovered there was a Sikh empire. I also discovered that just two hours from my house was the place where Duleep Singh was buried, in Eleveden Church. I knew nothing about it.

During the weekend I told a friend who stayed close to the church, “Do you know there is a prince buried right next to your house?” I looked at the graveyard and his house.

In six weeks I ended up in Lahore. I sat on a tonga and took a ride around the city. I saw the Lahore fort. The view was so imposing that it was embedded in my brain. After that I saw the samadhi of Ranjit Singh in Lahore. I also visited the Sikh gallery. That was the beginning. From then, the more I read about Sikh generals and empires, the more fascinated I was.

Back in the 1980s and 1990s everybody was looking for a role model. And we [Sikhs] were fortunate to have Duleep Singh. We had an attachment towards Duleep Singh and Ranjit Singh. For us, they were kings. A lot of Sikh organisations in Great Britain talk about the repatriation of Duleep Singh. But, many, like me, do not want him to be repatriated. His body was to be exhumed and sent to India but at the end of the day, he was born in Lahore. He had nothing to do with Amritsar.

The Koh-i-Noor belonged to the people. Ranjit Singh wore it at state functions, only to impress the British and the foreigners. Otherwise it was lying around in the fort.

The golden throne of Ranjit Singh is in the Victoria and Albert Museum in London. Mind you, nobody ever dares to sit on that chair, because it feels that Ranjit Singh is still there. That is how powerful it is. Same is the case with the Koh-i-Noor. When you move past it and look at it for a few seconds, there is some kind of vibration you feel; a feeling that it is alive. People do not want to give up such symbolic relics because there is some kind of magic behind it. I cannot express it in words. It is like a magnet that draws you in.

Bansal is a councillor in Leicestershire, UK. He has written four books on Maharaja Ranjit Singh. His latest book is The Punjab Chiefs: The Lost Glory of The Punjab Aristocracy in India and Pakistan.