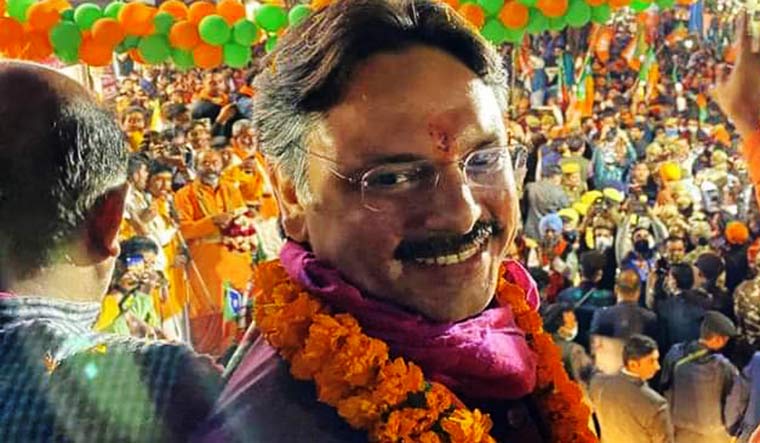 In the Enforcement Directorate corridors, Rajeshwar Singh is credited with sending Congress leader P. Chidambaram to jail. Thirteen of his 23 years in police services were spent in the ED, and he holds the rare distinction of having signed the most number of files in the ED. A state police service officer of the 1996 batch, Singh was sent to the ED on deputation in 2007 and was permanently accommodated in the Central agency in 2014, following a Supreme Court order.

He probed some biggies, like the 2G spectrum allotment case, the Commonwealth Games case, AgustaWestland Chopper deal and the Aircel-Maxis deal. This January, he took voluntary retirement, and in February he was named the BJP’s candidate for the Sarojini Nagar constituency in Uttar Pradesh. Excerpts from an exclusive interview with the BJP MLA:

Q. Do you think the Prevention of Money Laundering Act (PMLA) is a good law?

A. The PMLA was brought in as per the guidelines of the Financial Action Task Force and India’s commitment to meet international standards to check financial crimes. It is a unique law, which is vital for getting international cooperation in the administration of justice. Financial frauds are no longer restricted by geographical boundaries and white-collar criminals open bank accounts in multiple countries [from] where money is transferred to multiple locations. Hawala transactions and shell companies make law enforcement difficult. But PMLA is meeting this challenge effectively.

Q. It is said you were instrumental in the arrest of former finance minister P. Chidambaram. What was your experience?

A. Mr Chidambaram is a sharp person who has been charge-sheeted in the Aircel-Maxis case. I got a chance to interrogate him, but he would not give straight replies. So, it was a challenge to speak to him. The matter is sub judice, so I would not like to comment more on the case or the accused.

Q. There were accusations levelled against you during your tenure in the ED. Please comment.

A. [Several] members of Parliament have levelled allegations against me after I was entrusted with investigation of corruption cases against certain politicians. The biggest challenge I faced was investigating the 2G spectrum case. In order to create hurdles in the process of summoning powerful personalities for interrogation, more than 100 baseless and false complaints were registered against my family members and me. I was targeted until last year, when I decided to take voluntary retirement. It is the plight of every investigating officer…. In the ED, I investigated the maximum number of high-profile cases against politicians and businessmen who had resources at their disposal. Investigators are at the receiving end because it is easy to taint an officer by filing anonymous complaints or writing letters to members of Parliament. Once an officer gets tainted, multiple agencies get involved—from the Central Vigilance Commission, Lokpal, courts and the state departments, which ask for reports and initiate inquiries. Therefore, no officer wants to take up any big case or stick his neck out in sensitive investigations.

Q. What was the response of your seniors in the ED and the government when you joined politics?

A. The incumbent ED director Sanjay Kumar Mishra and former directors Karnal Singh and Arun Mathur have always stood like a rock behind me. I conveyed my decision to quit the police services last August when I opted for voluntary retirement. I felt I would be in a better position to serve the country.

Q. Don’t you think there should be a cooling off period for police officers holding sensitive posts before they quit the service to join politics?

A. It is for the government to decide on this aspect. Currently, there is no such law to bar police officers from joining politics immediately after quitting the service. After all, any individual… has the right to contest elections and it is for the people to decide whom they want to elect.

Q. There are accusations that the ED is being used as a political tool to target opposition leaders.

A. The ED is acting as per law, and it is being monitored by the Supreme Court, High Court, Central Vigilance Commission, Lokpal and other institutions; every summon and every arrest can be challenged in a court of law. Therefore, the agency is bound by law and accountable for its actions. Every decision it takes goes to the adjudicating authority. There is no scope for any officer of the ED to get away with any action that goes against the law of the land.