Details from an ED inquiry into an alleged Rs 25,000-crore scam 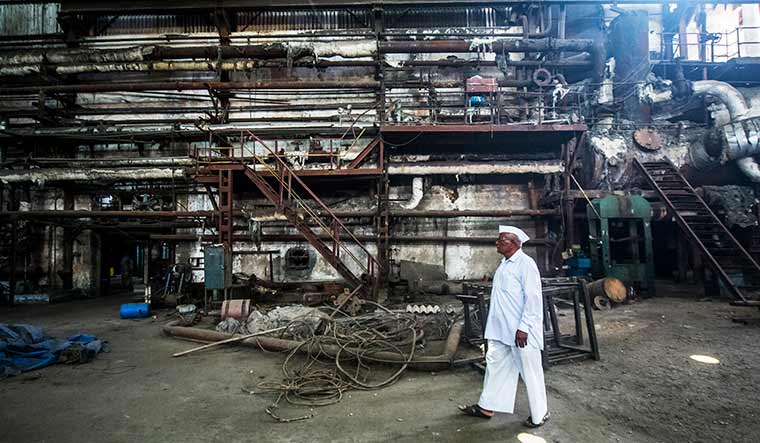 Lost glory: The Bhima Patas factory, which was once one of the largest in the state, has been dysfunctional for years | Vishnu V. Nair

In 1980, soon after she returned as prime minister, Indira Gandhi toured Maharashtra. The state was under President’s rule, assembly polls were round the corner, and breakaway factions were threatening the Congress’s prospects. So Indira enlisted the help of a regional strongman with deep grassroots links—Vasantrao Patil.

Patil, then 62, was a pioneer of the state’s thriving cooperative sector. He controlled many cooperative institutions—from banks and credit societies to sugar mills and fertiliser factories. In the run-up to the polls, Patil and his wife, Shalini—followers fondly called them Vasant dada and Shalini tai—leveraged their influence in the cooperative sector, helping Indira and the Congress return to power in the state.

Fast forward to 2022. The cooperative movement in Maharashtra, which Patil once nurtured like a baby (the couple did not have children together), is in dire straits. There are allegations that corruption under the Congress-NCP rule from 1999 to 2014 crippled the once-thriving cooperative sugar mills. The allegations have led to a political showdown—between the opposition BJP and the ruling Maha Vikas Aghadi (MVA) coalition of the Shiv Sena, the NCP and the Congress—whose outcome can impact the 2024 Lok Sabha polls.

At the centre of the political battle is the Enforcement Directorate (ED), which is probing allegations that the sale of debt-laden cooperative sugar mills to private entities resulted in a loss of Rs25,000 crore to the exchequer. According to ED documents seen by THE WEEK, at least a dozen such mills were grossly undervalued and then sold to private companies owned by politicians and their relatives. The ED says it is probing a web of conspiracy, and that it has unearthed incriminating financial transactions, acts of omission and commission, and a corrupt nexus between various cooperative banks.

The agency made its first move in July 2021, when it attached Jarandeshwar Sugar Mills Private Ltd, a major sugar producer in western Maharashtra that Shalini Patil had started as a cooperative unit in 2000. The agency alleges that the company, which had defaulted on a loan taken from the Maharashtra State Cooperative Bank, was sold to a dummy company floated by a politician’s relatives, at a price that was much below the market rate. The ED says that Ajit Pawar, deputy chief minister and NCP leader Sharad Pawar’s nephew, was a member of the MSCB board of directors that allowed the sale.

Pawar has denied the allegations, saying the mill was sold as per directions of the Bombay High Court, and that he was not connected in any manner to the company that won the bidding process. “The allegations levelled against me are politically motivated,” he said.

Shalini Patil, however, is not convinced; she wants to take back possession of Jarandeshwar Sugar Mills. “I demand that the factory be returned to us since we have the most number of shares, and I am the original owner,” she told THE WEEK. “It is high time that action is taken against those who were involved in the corruption.”

According to Congress leader Sachin Sawant, the ED’s charges were part of the BJP’s efforts to destabilise the MVA government. “Cooperation, which was a state subject, has been absorbed by the Modi government as a separate department under Union Home Minister Amit Shah,” he said. “For the first time in the country’s history, the ED is being handled by [the home minister] instead of the Union finance ministry.”

Sawant, however, conceded that loans taken by several cooperative mills had become non-performing assets. “I am not saying there are no negatives,” he said. “We can definitely improve the system if there are irregularities. But to term it a scam and go after opposition leaders is not fair.”

ED investigators say those who are elected to run cooperatives are often affiliated to certain political parties. The elected members apparently not only mismanaged the mills, but also diverted funds and defaulted on loans. To recover the money and bring down nonperforming assets, the MSCB gradually attached several mills and began selling their assets. It is alleged that certain politicians and their relatives colluded with MSCB officials to buy these mills at throwaway prices.

According to Shalini Patil, 90, the sugar mill sector in Maharashtra had become fertile ground for vote bank politics. “Vasant dada asked me to go to Satara—my father’s place—to help local farmers by starting the [Jarandeshwar] sugar cooperative mill. Today I am fighting to save his legacy,” she said.

On January 24, activist Anna Hazare wrote to Union Cooperation Minister Amit Shah saying that 47 cooperative sugar mills have been sold to individuals at “throwaway prices”. He alleged that the government incurred a loss of Rs25,000 crore while selling 32 sugar factories. “My view is that these sugar mills… deliberately fell sick,” wrote Hazare. “These mills stood on the deposits and accumulated share capital of poor farmers, and the land given by the farmers were burdened with illegal loans taken by the board of directors. In the end, [the mills] were sold at scrap prices. The manner in which the sale was conducted… [is] a massive scam.”

According to the ED, the ownership structure of cooperative sugar mills benefits the rich and powerful at the cost of farmers. Said Vitthal Divekar, farmer and shareholder of the Bhima Patas Cooperative Sugar Factory at Daund in Pune district: “The owner of a farmers’ factory should be a farmer, and not an MLA. No political party should be involved in the work of a factory.”

The Bhima Patas factory, which was once one of the largest in the state, has been dysfunctional for years. It is now facing the risk of being converted into a private mill. “Our factory is closed and nearly 1,000 workers have lost jobs and benefits,” said Namdev Takawane, a former director. “It is closed not because of non-cooperation of farmers or workers, or lack of raw material. It has been closed with the intention of converting it into a private factory.”

Pramod Karnad, former managing director of the MSCB, said the cooperative sugar sector was plagued by systemic problems. “Sugar is a cyclical crop; it goes bad every fourth or fifth season. The cost of sugarcane, labour, chemicals, harvesting and transportation involve costs [that result in] farmers incurring losses. That is when politicians step in,” he said.

The creation of the Union cooperation ministry last year has instilled fresh hope in farmers, mill owners and other stakeholders. They expect the Union government to ask for a report from the state government and provide generous loans to restart closed factories. After all, both the Centre and the state cannot afford to turn a blind eye to the crisis—doing so will not only impact Maharashtra’s economy, but also affect India’s sugar exports.

The link between Maharashtra politics and the cooperative sugar sector strangely mirrors the bittersweet relationship between Vasantrao and Shalini Patil. After helping his wife win her first assembly polls from Satara—a bastion of sugar cooperatives—Patil apparently wanted her to maintain a low profile. “He thrust me to the forefront to run cooperatives and fight elections, but he did not quite believe in women’s rights,” said Shalini. “He became insecure after I started attracting a lot of attention, much more than he had originally desired.”

The couple got estranged over the years, but she is now fighting to save her late husband’s legacy. “Today, I am the oldest politician in Maharashtra who knows what is ailing the cooperative sector,” she said.

Is there a cure for the disease? Patel said that she was confident that the state’s cooperative sector would eventually bounce back “like a phoenix”; but first, sugar politics will have to be reduced to ashes.