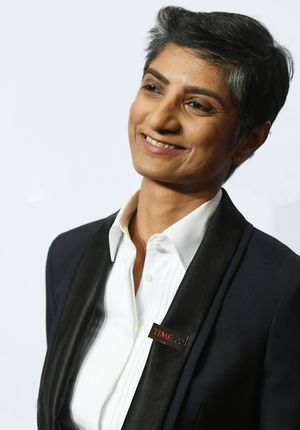 The future belongs to those who believe in the beauty of their dreams.

ONE WINTER EVENING in 2012, I had a few friends over who, at some point, started talking about this amazing young lawyer who had won the Right to Education case. The court had ruled that private, unaided primary schools should reserve 25 per cent of their class strength for children from weaker sections and give them free education. This became a dinner conversation where, for a change, everyone was animated about something positive.

A couple of years later, I was introduced to this “agent for change” by some common friends, and I have to admit I was not expecting this skinny, unassuming woman—who wore Gap T-shirts from the kids’ section and who liked to eat soggy bhindi—to be this trailblazing brilliant lawyer challenging the status quo and upsetting the applecart!

Menaka and I really only started talking in 2013, when the Supreme Court criminalised homosexuality, as I had heard she was actively involved in the whole debate/debacle. But those talks were more for getting updates than anything else.

2015 was when I got to know her well, as she was representing me in a legal matter in Goa and we were frequently travelling together. I still remember we were on a flight, discussing the 2013 verdict, and how there were not any gay people who had filed a petition to overturn Section 377; instead, it was mainly NGOs, parents and school teachers. Suddenly, she asked me if I would become a petitioner, and I said yes without even thinking. Over the next three years we met often and my admiration for her grew in leaps and bounds.

Today, everyone tells me that I did an amazing thing by becoming a petitioner. But the truth is that without Menaka, Arundhati Katju, Saurabh Kirpal and the entire legal team, I do not think it would have amounted to anything significant or achieved the result we were so hoping for!

Menaka and Arundhati, despite living in the US at that time, made constant trips back and forth, giving it their all, without ever knowing what the end result could be. It was a hugely challenging time, both personally and professionally, but they were totally committed to the cause and the process.

Menaka had been my friend, but it was during those days in the courts when the final hearing took place in front of the five-judge bench that I actually saw her skills, her passion and her grit. I still remember when she presented her closing statement, there was silence in the courtroom and some people even had tears rolling down their cheeks. There was a moment when we felt the first flicker of hope that maybe all was not lost. Every lawyer present in the building had come to Court No 1 to hear her speak, the room was crowded;

It has been over three years since the landmark judgment was made, overturning a 157-year-old law [criminalising homosexuality]. While we, the petitioners, may have taken a back seat, my brilliant friend Menaka still has many battles and wars to win, making the Indian Constitution more just and right for the people of India.

I am proud of Menaka for representing anyone, gay or straight, deserving of a better life through education or civil rights. She does not give up, persevering through the tough times of frustration and closed minds. I have seen her put her great intellect, heart and soul into causes she believes so passionately in.

Today, every member of the LGBTQ community, their families and their friends owe their right to freedom of expression to her; and I, for one, am proud to call her a dear friend.

Dalmia is one of India’s most celebrated chefs and co-owns restaurants in India and Milan, Italy.