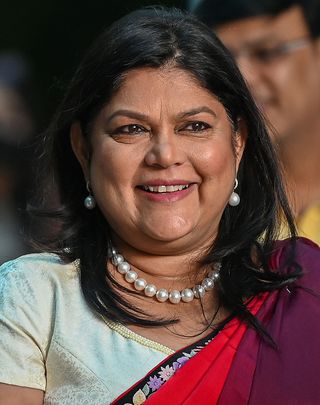 FALGUNI NAYAR BECAME an entrepreneur in 2012, when she was pushing 50. With people half her age chasing unicorns, the former banker, too, threw her hat in the ring. Now, a decade later, Nayar is the latest entrant into the Indian women billionaires’ club.

The founder and CEO of Nykaa—the online fashion brand—said she hopes her homemade success story inspires others to go for their dreams, too. Nykaa, which means actress in Sanskrit, has given Indian women first-time access to several global brands—it currently offers more than 4,000 products on its portal.

Nykaa’s parent company, FSN, had a dream debut in the stock market in early November; listed on the Bombay Stock Exchange, it hit a valuation of 01 trillion during the first five minutes of trading.

Part of a Gujarati business family in Mumbai, Nayar said she was inspired by entrepreneurs such as UTV’s Ronnie Screwvala and Ajay Bijli of PVR Cinemas. An alumna of the Indian Institute of Management, Ahmedabad, Nayar had always wanted to do something in the beauty space. She wanted to build a multi-brand, omni-channel retail business focused on beauty. She also wanted to empower the customer and enable brands to reach the far corners of the country. Today, Nykaa is India’s leading beauty retailer, playing a critical role in developing the market in India.

Nayar had started her career as a consultant with the accounting firm A.F. Ferguson & Co; she later spent 18 years with Kotak Mahindra Bank. Today, she is leading a beauty revolution and is worth Rs56,600 crore. She is also India’s richest self-made woman. Not bad for a former banker, eh?