How 356 sepoys of Bhopal contingent defied begum, British to set up a parallel govt 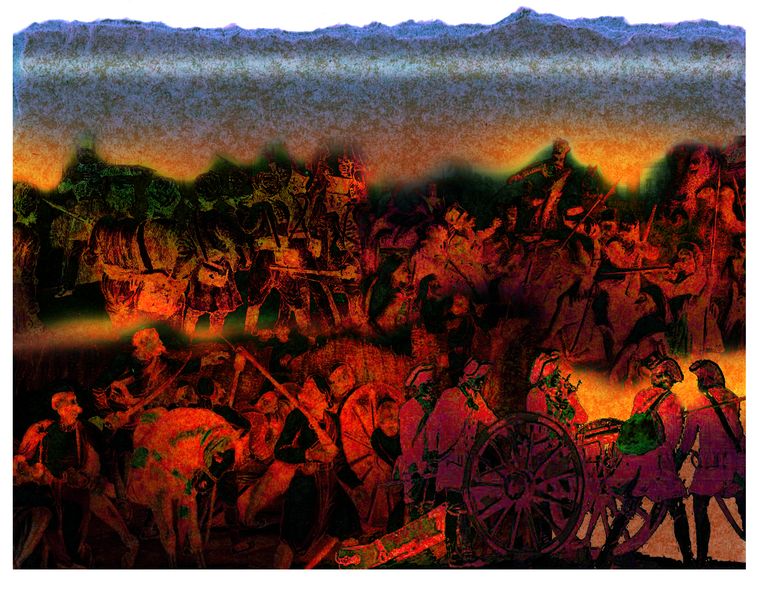 A massive neem tree amid a maize field acts as the only signpost. If not for the tree, one would miss the spot where a massacre took place in early 1858.

We are at Saikdakhedi in Sehore, 40km from Bhopal and about 1km from the busy Bhopal-Indore highway. River Siwan flows close by. The neem tree on Sainik Chawni (cantonment) ground is said to mark the spot where 149 of 356 rebel sepoys of the Bhopal Contingent Force—a joint force raised by erstwhile Bhopal nawabs and the British—were killed by the British on January 14, 1858; the rest were killed in different spots on the ground. As per local lore, bodies of the sepoys were hung by the tree and later dumped in a common grave.

It is only when one nears the neem tree that the concrete structures become visible. There is a newly built boundary wall that runs along just two sides of the 10-acre plot, a slightly older pavilion-like memorial structure under the tree and a much older whitewashed tomb. The tomb, which probably marks the grave, is almost buried under a heap of dumped irrigation pipes.

The 10 acres were earmarked for the memorial thanks to Smarak Nirman Samiti, Sipahi Bahadur Sarkar, a citizens’ organisation. Anand Gandhi, 39, general secretary of the Samiti, is saddened by what he sees. The tomb is littered with dried leaves and other refuse. A buffalo is tied nearby. He removes some of the pipes and, picking up a dried branch, sweeps the tomb clean. He, along with the organisation president Omdeep Singh, 80, and social worker Jayant Shah, 57, silently pay homage to the martyrs with folded hands. “You would not imagine this is such an important spot, right?” asked Gandhi.

Indeed, it is difficult to imagine that this spot was witness to one of the most significant stories of the 1857 uprising. A unique aspect of the Sehore mutiny is that the sepoys not only rebelled against Bhopal’s begum and the British but also set up a parallel government. Yet, their story remains forgotten and the spot neglected by government authorities, although it falls in the home district of Madhya Pradesh Chief Minister Shivraj Singh Chouhan.

The most detailed and authentic narrative of the Sehore revolt is found in Sipahi Bahadur (1994) by Asadullah Khan. It was later translated from Urdu to Hindi by state culture department’s Swaraj Sansthan. Khan’s book extensively quotes from preserved documents of the rebellion (Gadar ke Kagzaat); Hayat-e-Sikandari, a biography of then Bhopal nawab Sikander Jehan Begum (reign: 1844-1868); the Bhopal State Gazetteer compiled by Captain C.E. Luard in 1908; Central India during the Rebellion of 1857 and 1858 by Thomas Lowe, medical officer in the British army; and the Delhi Gazette of January 15, 1858. Pakistan’s former foreign secretary Shaharyar Khan, a descendant of the begum, also mentions the Sehore mutiny in his The Begums of Bhopal (1999).

The 1857 revolt against the British was slowly gaining ground in north India. Sehore, where the Bhopal Contingent Force was based, was already simmering. Many in the contingent were upset over low wages—they were paid only 03 to 04 per month, half of what the armies of Holkar and Scindia rulers were paid. On May 1, about 500 copies of a poster on rebellion were distributed among the sepoys. One of them, inspired by the poster, refused his wages and left for Delhi to join Mughal emperor Bahadur Shah Zafar’s force. He was removed from service, thus infuriating other soldiers.

On July 1, rebel soldiers of Holkar army attacked the residency building in Indore cantonment. About 50 Englishmen were killed. Henry Marion Durand, the British political agent to Indore, sought help from the Bhopal begum and was brought safely to Sehore. The begum’s action upset the sepoys. Also, 14 rebel sepoys who were posted at Indore and Mhow returned to Sehore without permission and instigated the Bhopal soldiers. It had reached a point where the British political agent to Sehore—Major William Henry Rickards—and his family and associates were forced to flee to Hoshangabad on July 10.

The unrest intensified when their commander-in-chief Bakhshi Murawwat Mohammad Khan set up a committee to check on the rebellious activities at the begum’s order. The committee ordered the dismissal of the 14 soldiers who had left Indore and Mhow, including the popular Koth Havaldar Mahavir and Subedar Ramjulal, among others. Fearing a mutiny, Mahavir and Ramjulal were spared. Later though, there was an order to arrest Mahavir and dismiss rebel leaders like Risaldar Wali Shah, his brother Arif and Ramjulal.

Matters came to a head on August 6, 1857, when a probe at Ramlila ground in Sehore found that powdered bones of animals was mixed with sugar. And, there was an open revolt.

As per records, on Shah’s call the sepoys who returned from Ramlila ground gathered at another spot in Sehore. Shah spoke about the begum’s allegiance to the British and the harassment of soldiers. Shah was declared leader of the rebel sepoys. He also announced the setting up of ‘Sipahi Bahadur Sarkar’, on the lines of the British’s Company Bahadur Sarkar. The Union Jack was pulled down from official buildings and two flags—Mahaviri Nishan and Nishan-e-Mohammadi—were unfurled, reportedly at Kotwali police station, as a mark of unity between Hindu and Muslim soldiers. This ‘independent and parallel government’ was established at Sehore. 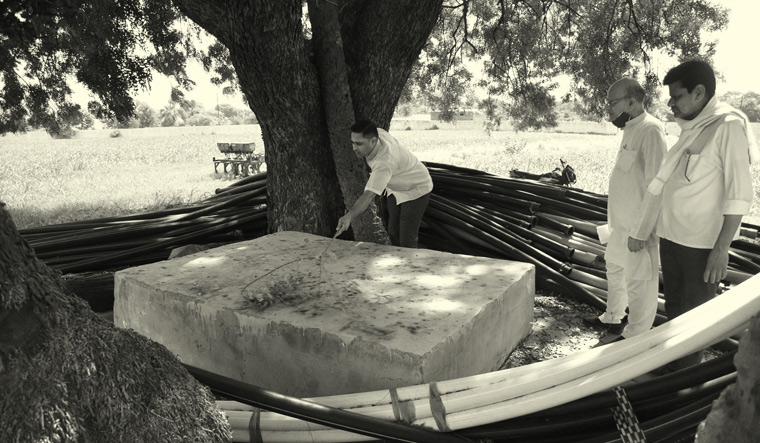 Soon, an administrative council called Mahaviri Council, headed by Mahavir, was formed. Two courts—probably for criminal and civil cases—were set up on August 8 and 9. The courts were headed by Shah and Mahavir.

The begum tried to rein in the rebellion, ordering the dismissal of 137 rebels in September 1857. In October, a reward for their arrest was announced. Mahavir escaped to Garhi Ambapani, where the jagirdar (vassal) Fazil Mohammad Khan had also rebelled. Mahavir’s arrest order caused many sepoys to rebel. However, state forces attacked different rebel centres and killed leaders like Fazil, thereby weakening the rebellion.

On January 14, 1858, General Hugh Rose, commander of the Central India Field Force, and his men entered Sehore and killed the arrested rebel soldiers. They later defeated the Rani of Jhansi and the forces of Scindias in May and June, respectively.

Asadullah Khan wrote that 356 soldiers were killed in small groups on the day, without a fair trial. Of these, 149 were lined up at a single spot and shot, wrote Thomas Lowe.

While Mahavir, who had escaped to Sagar, was executed on February 3, 1858, no records are available about Shah’s fate.

The government has done little to honour the martyrdom of these “early freedom fighters”. Anand Gandhi’s father Rishabh, a journalist, set up the Samiti almost 25 years ago. Every January 14, its members pay homage to the martyrs. It was thanks to the Samiti that then Union minister Anil Dave led a ‘Tiranga Yatra’ from the Saikdakhedi ‘Shaheed Sthal’ to Bhopal in August 2016. The pavilion was Dave’s initiative and was built with the state tourism department’s support. The Samiti managed to convince the district administration to build an approach road to the 10-acre plot. The boundary wall was built last year.

The plot was part of the property owned by the now closed BSI Limited (Bhopal Sugar Industries Limited). With the district administration yet to formalise the memorial project, residents have started farming at the spot.

Gandhi said that he had heard community elders say that the sepoy residences and a hillock used for firing practice near the spot were razed when BSI Limited came up in 1937. Only the neem tree was spared, and later the tomb was erected by residents. However, remnants of an elevated canal that carried water from River Siwan to the Sehore cantonment still exist close to the spot.

“Things and memories have been lost and are likely to further fade away,” said Gandhi. “This is why we want the government to take over the spot and build a proper memorial with a museum and resource centre that could highlight the history of Sehore’s contribution to the 1857 freedom struggle.”

Madhya Pradesh Culture Minister Usha Thakur told THE WEEK that if a proposal was sent to her, she would ensure that the memories of the martyrs were preserved and honoured.