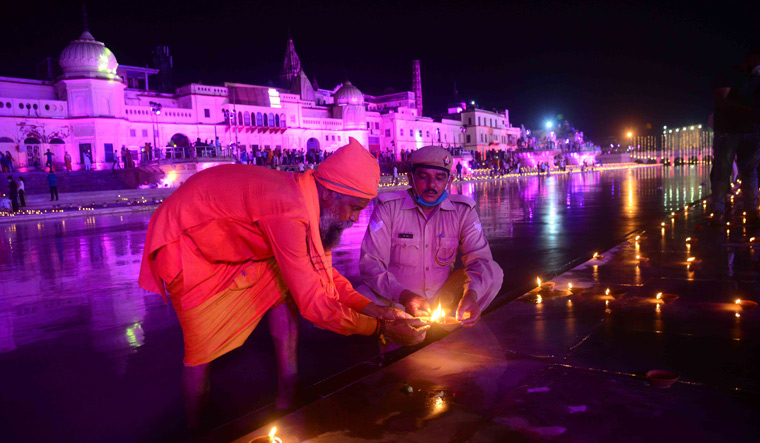 Centre of attention: Two devotees light lamps on the eve of the foundation-laying ceremony of the Ram temple in Ayodhya. The city has sharply influenced the political history of the country | Getty Images

The name of a north Bengal village makes many shudder today. It came into the news five decades ago and modern-day dissenters are tagged to the name of the village: they are called “Urban Naxals”. Located 3km from the Nepal border, Naxalbari was the birthplace of an armed revolt by peasants, which gave a new term to the political lexicon. The armed Naxalites have a presence in over 50 districts. “This shows the relevance of Naxalbari even after 50 years,” said Abhijit Mazumdar, son of revolutionary Charu Mazumdar. “The flaming fields now have extended far and wide.”

Existing in a parallel narrative is Ayodhya, an ancient city being prepped as the Hindu capital of the country with Ram as the presiding deity. The temple, a symbol of Hindu nationalism, will be opened for darshan by December 2023. The city has sharply influenced the political history of the country and the fortunes of the BJP. Mahant Satyendra Das, the chief priest at the Ram Temple, also an eyewitness to the tumultuous events of Ayodhya, confirmed to THE WEEK that his Guru Abhiram Das placed the idol of Ram Lalla inside the disputed structure in 1949—an act that would change the course of the country.

As we embark on year-long celebrations of the 75th year of independence, it is also a time to revisit stories from some of the key places that have shaped our polity: from Naxalbari to Ayodhya; Lal Chowk in Srinagar to Pokhran; Anandpur Sahib in Punjab to Kumarakom in Kerala; Nagpur to Meenakshipuram in Tamil Nadu. THE WEEK visited 12 places to hear from eyewitnesses who unwittingly became characters in some important events in the nation’s history. 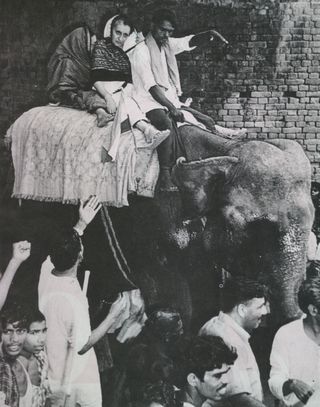 Wild ride: Indira Gandhi rides an elephant to reach Belchi, a village in Bihar where a massacre had taken place, in 1977

In 1956, Dr B.R. Ambedkar, the architect of our Constitution, did an act of defiance from Nagpur to fight casteism. He, and lakhs of followers from the dalit community, quit Hinduism to embrace Buddhism. Nagpur is also the headquarters of Rashtriya Swayamsevak Sangh. Ironically, the sangh had embraced Ambedkar to bring dalits into the Hindu nationalistic fold. However, in 1981, when 300 dalit families converted to Islam in Meenakshipuram to escape caste violence, many of the sangh parivar outfits descended on the small village to reconvert them to Hinduism. The event thus became a precursor to anti-conversion laws now being brought in by various BJP-ruled states.

In the last 75 years, different versions of nationalism and regional identities have swept the country. The 1998 Pokhran nuclear test was arguably the most important event that contributed to the rise of muscular nationalism–the kind that is now being practised by Prime Minister Narendra Modi. But, as THE WEEK discovered, the residents of Khetolai, the closest village to the blast spot, suffered a lot because of the event.

In contrast, Lal Chowk in Srinagar is a symbol of divergent categories of nationalism. Unfurling a tricolour on the street has been portrayed as a valiant act of nationalism. The terror groups, too, have tried to unfurl their flags as a sign of assertion.

We also bring stories from places that witnessed the events that would set the ideological trajectory of some of our major political parties. In 2000, the then prime minister Atal Bihari Vajpayee came to Kumarakom, a scenic village in Kerala, to have a vacation. He wrote two essays from here that had a reconciliatory tone on two “legacy” issues—Kashmir and Ayodhya. Two decades later, the new BJP under Modi-Amit Shah has realised these ideological goals, albeit aggressively. The 1955 All Indian Congress Committee session in Avadi, Tamil Nadu, made the grand old party adopt a socialist line, which is still reflected in its ideals of rights-based governance. Anandpur Sahib in Punjab is a place of great significance for the Shiromani Akali Dal as it is here that the party adopted a comprehensive document—referred to as the Magna Carta of Sikh aspirations—in 1973. It was decried as a separatist document, only to find its relevance again when talks of redefining Centre-state relations are gaining credence.

In 1977, months after suffering a humiliating defeat after Emergency, Indira Gandhi set a unique example of political outreach. Her visit to Belchi—a remote village in Bihar where a dalit massacre jolted the nation—caught the country’s attention, and helped Indira to regain power. However, Janaki Paswan, 82, the lone surviving witness of the massacre, told THE WEEK that the condition of Belchi’s poor remained unchanged.

Shimla, which features because of an eponymous agreement of 1972 between India and Pakistan, is no longer a hot favourite for political conferences; as veteran journalist P.C. Lohumi remarked, all the conferences (including those under British rule) that have taken place in Shimla have either failed or were not in the interest of India.

India is too vast to be covered in a few events, but some of these forgotten events had been catalysts for wider changes. The idea of this nation exists beyond the dominant narrative. Some echoes can be heard in the collective consciousness of the people who have been witness to the epochal changes, yet themselves remained unchanged.