Attingal revolt was among earliest acts of resistance against British imperialism 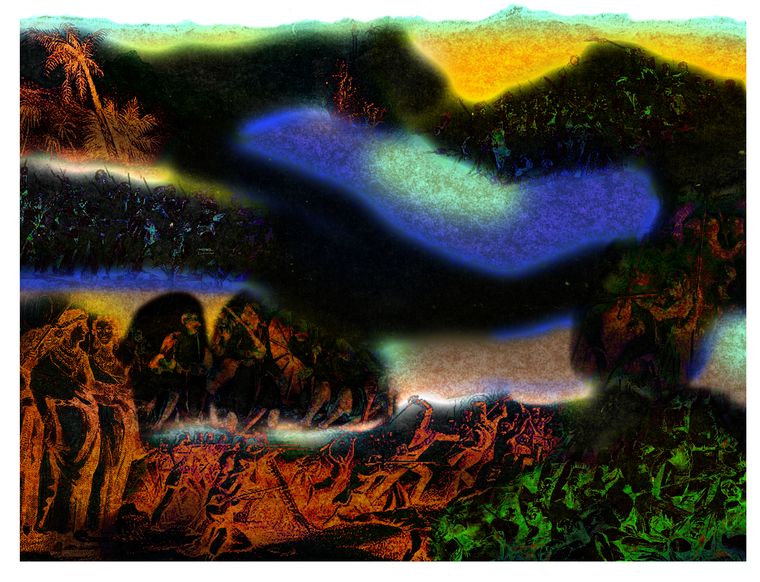 The weather is sultry, and the air smells of dried fish. Dark clouds hover over the Anchuthengu Fort and the multi-coloured shanties of fishermen that flank it, but it does not rain. The iron rails circling the fort resemble a clothesline, with white mundu and saris hung to dry. The fort, with an area of just over an acre, looks more like a huge house. But it hides its past well—it is the lone memorial of one of the earliest “successful” resistances against British colonialism, wherein 130-odd Englishmen were killed by natives.

The uprising happened exactly 300 years ago in 1721, and it happened in a region ruled by a queen: Attingal.

The Attingal principality, with the sea on one side and the Sahyadri on the other and rich with rivers and connecting water bodies, was the motherland of all rulers of Travancore. The rani of Attingal was the head of the Venad royal house, one of the four medieval kingdoms in Kerala, which followed a matrilineal system of inheritance. The most famous queen of Attingal was Aswathi Tirunal Umayamma Rani (1677-1698).
She was known for her valour, beauty and diplomacy. Umayamma was not only the queen of Attingal, but also the head of a confederacy of semi-independent states such as Travancore, Nedumangad, Kottarakkara, Kollam, Karunagappally and Kayamkulam. It was during her period that the British came to Attingal, seeking permission to build a fort in Anchuthengu or Anjengo, as the British called it. They came calling for the pepper from Nedumangad, one of the most sought-after spices in Europe then.

Tread in by trade

The Portuguese, by virtue of being the early ones to arrive at the Malabar coast, had monopoly in all four kingdoms in Kerala—Venad, Cochin, Kozhikode and Kolathunadu. By the turn of the 17th century, the Dutch had monopolised the Kerala coast, as the natives preferred the better-mannered Dutch over the Portuguese.

But soon, the English East India Company made inroads by appeasing the rulers. Umayamma welcomed the British in Attingal, thinking it would end the Dutch monopoly and bring more money to her land. It was opposed by the Dutch and the merchants supporting them. The British, however, showered the queen with precious gifts and got permission to build a fort in 1694. They also got exclusive rights to buy pepper at a much cheaper rate than what the Dutch were offering.

This led to huge protests from farmers—mostly Nairs and Ezhavas—and also traders, mostly Muslims. A section of the feudal lords with an army of their own—the Pillais—also turned against the British. “While rani remained the figurative head of the Attingal kingdom, the real power rested with these Pillais who were her ministers,” said historian M.G. Sashibhushan.

Following the unrest, Umayamma asked the British to stop the construction of the fort. When they refused, she sent troops to the site. The troops, however, stood no chance before the guns and cannon balls of the British. On July 27, 1694, Anjengo became a full settlement of the English. Umayamma died in 1698, regretting her decision.

Around the same time, the Company sent a new officer—William Gyfford—to the fort to rein in corruption as some officers were indulging in private trade.

A revolt in the making

The two rulers who succeeded Umayamma were weak, and the British made deeper inroads into Attingal. The Dutch were made powerless. The British also exploited the lack of unity among the Pillais. By the 1720s, the British dictated the terms of merchandise in Attingal.

The natives were already fed up with the unethical trade practices of the British. To add to it, Gyfford and his wife, Catherine, would make fun of their religious practices. He and his Portuguese assistant—lgnatio Malhiero—were also averse to Muslims. Catherine apparently would throw dirty water on them when they visited the fort.

Moreover, the English started buying properties around the famous Sarkaradevi temple, infuriating the natives, who always suspected that the English had a religious motive as well. Worse, Gyfford and his men humiliated the ‘potti’(the Brahmin priest) of the temple. The priest and his family reportedly committed suicide.

The natives had suffered enough. They approached Kudaman Pillai, one of the most prominent ministers of the kingdom, and requested him to lead a revolt against the British. While Pillai—well-trained in kalari—agreed, he knew the natives stood no chance before the advanced weaponry of the British. With his nephew’s support, he invited kalari experts from the north and south to train the natives—both Hindus and Muslims. “The people of Attingal came together against the British, forgetting caste, class and religious barriers,” said C.V. Giri Aradhya, author of Attingal Kalapam. “It was a rare act at that point in time.”

Gyfford and his officers got a whiff of the brewing hatred against them, and thought it prudent to win over the queen. He decided to pay her a visit. Vanchimuttam Pillai, a minister who was close to the British, advised him against visiting the queen, but he insisted. And, the queen invited him to the palace to celebrate Vishu.

Gyfford set sail for Attingal in three huge boats with 132 Englishmen (some say 133) and an equal number of slaves. While sailing through the Vamanapuram River, he saw crowds gathered on its banks. He apparently waved at them, thinking they were there to greet him. Little did he know that they were the kalari warriors.

Gyfford presented the queen with gold coins, velvet and perfume. He and his team were served the traditional feast, and liquor, too. As night set in, Kudaman Pillai and his kalari warriors entered the palace. The result: none of the Englishmen survived.

Historians are, however, divided on the location of the attack. Some say it took place at the palace when the drunk Englishmen were asleep; others say it happened when they were sailing back to Anchuthengu. 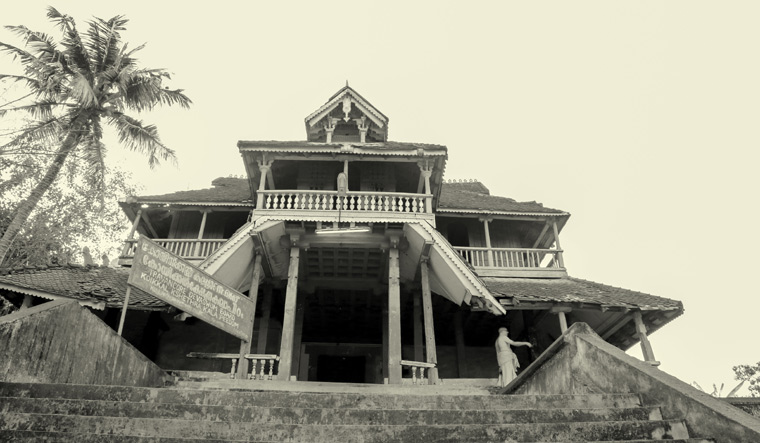 Lost glory: The entrance to the Attingal palace. A major portion of the palace is in a dilapidated state | | B. Jayachandran

The fact, however, remains that the entire British crew was decimated. “They [natives] were so fast that the British died before they realised what was happening,” said historian Prof T.P. Shankarankutty Nair. According to him, the bodies of British leaders, like Malhiero and Gyfford, were cut into pieces. Gyfford’s tongue, too, was chopped into pieces and thrown into the river.

“The brutality with which the British were treated was proof of the agony and humiliation the natives must have suffered at the hands of the British,” said Giri Aradhya. “The river had turned red for a while with all the dead bodies floating in it.”It is said that the river got the name Kollumbuzha (the river that kills) after the incident.

“While 134 British soldiers died, none from the native side died. That is quite unique in our fights against colonial powers,” said historian Rajan Gurukkal. “The Attingal revolt may not be nationalistic in fervour, but it certainly sprang from love for one’s motherland.”

The Company records, however, only mention 23 casualties. “It was the Dutch records that gave a clear picture about the casualties,” said Sashibhushan.

Historians are also divided on whether the queen was aware of the attack. Some like Nair say that the attack had her silent approval. “Though she blamed Kudaman Pillai for the ‘heinous’ act, the raja of Travancore blamed her for the massacre,” said Nair. “The Dutch records also blame the queen for her connivance.” Giri Aradhya, however, said that the queen would not have allowed the attack if she had information. “The fact that rani wrote a letter of apology to the British is proof of this,” he said.

As news about the killings reached the fort, family members of the dead officers were shifted to Kollam, and the remaining soldiers took guard of the fort. Natives tried to ambush the fort, but fell back after they were fired at.

According to research scholar A. Anilkumar, the natives blocked trade for nearly six months until additional forces arrived. “The natives sent a clear message to the Company that there will be resistance if they went ahead with their deceit and unethical practices,” he said.

Repercussions of the revolt

When the Attingal rani apologised for the bloodshed, the British not only demanded a hefty compensation, but also saw to it that the family of Kudaman Pillai was decimated.

When Marthanda Varma, founder of the Travancore dynasty, came to power in 1729, he put an end to feudalism. He saw the Pillais as a threat to his sovereignty and decimated them with the help of the British. He also annexed Attingal and merged it with Travancore state.

Despite being the first incident of native resistance against the British, the Attingal revolt finds little mention in the Travancore records or even the Company records.

“The revolt of 1721 is one of the earliest of the anti-English and anti-foreign upheavals of India, staged 36 years before the Battle of Plassey and 136 years before the 1857 struggle for freedom,” said Nair. “It is unreasonable and illogical that this fight has been sidelined by historians.”

The British, said Sashibhushan, tried to underplay the incident as it would affect their international standing. “The Company would also find
it difficult to get recruits from Britain if the magnitude of the bloodshed gets reported
correctly,” he said. “Palace historians tried to downplay it as they were worried it would affect the foreign trade from Attingal.” According to Anilkumar, the revolt is not much celebrated “as it had no royal patronage”. Said Anilkumar: “Attingal revolt was the first ever resistance of common men—farmers, fishermen and traders—against a colonial power. It should not have been neglected like this.”

Even in Kerala, history textbooks have only two lines on the revolt. “You are lucky if you have studied at least two lines about the Attingal revolt in school. In our times, even that was not there,” said Kerala Council for Historical Research chairman Michael Tharakan, adding that more in-depth research into the revolt is required.

The Attingal rani’s palace is in a sorry state today. Nobody would say that queens whose writ was revered all over south Kerala lived here. A major portion of the palace is in a dilapidated state and some portion has been sold to private hands. The rest is being renovated by the state culture department.

The natives barely have any idea about its history or the revolt. “I have heard some stories about Umayamma Rani and the revolt from my grandmother when I was a child,” said Narayanan Kutty, who stays next to the palace. “But who remembers all that now?”

The Attingal fort, meanwhile, has caught public fancy, thanks to a ‘secret tunnel’ that opens to the sea. Many colourful stories are being spread about it and the fort, which is now under the control of the Archaeological Survey of India.

Look deep into the tunnel, and all one can see is darkness, but one can hear the sound of waves at a distance—just like how history whispers truths to those who care to delve deeper.