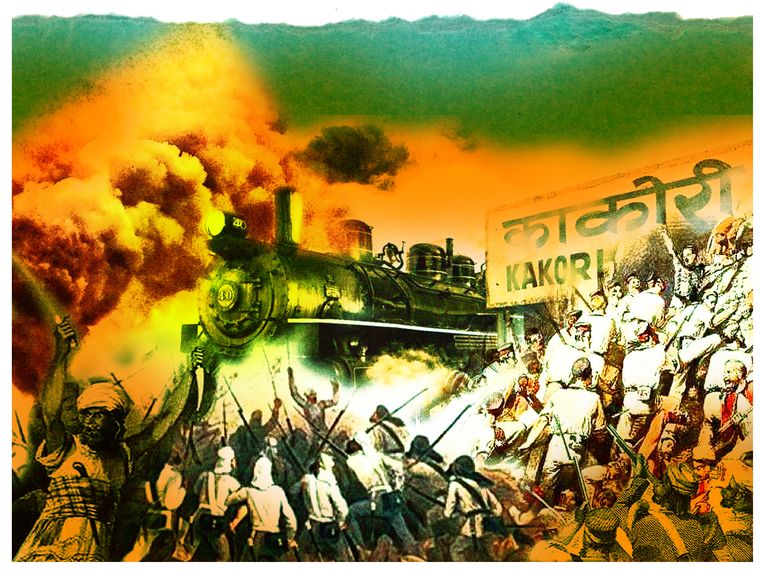 The desire to free one’s motherland from the shackles of serfdom was not a task devoid of delight.

At least not for the members of the Hindustan Republican Association (HRA) who had gathered at the home of Rajendra Lahiri in Varanasi one summer.

Lahiri, a post-graduate student of history with a deep knowledge of weapons, was the HRA’s district organiser. On that day, he challenged his comrades to jump from a ledge that hung some 20 feet above the inner courtyard of his home.

Chandra Shekhar Azad was the first to go, followed by Ram Prasad Bismil. When Lahiri’s turn came, he climbed, touched the edge repeatedly and then chickened out. “He told his comrades that the dare had just been for fun and that a real champion could only be one who could polish off the greatest quantity of sondesh (a sweetmeat),” said Udai Khattri, the son of Ram Krishna Khattri. Khattri Sr was one of the 16 revolutionaries who spent anywhere from two years to a lifetime in jail for their involvement in the Kakori conspiracy (or Kakori train action). Khattri Jr, now 73, cannot date the incident at Varanasi, but uses it to illustrate the easy camaraderie among the men.

In his autobiography, Bismil (meaning wounded; it was his nom de plume) writes of Ashfaqullah Khan—one among the four who was sent to the gallows—that when he lost consciousness once, the only words he said were, “Ram, hey Ram”. To onlookers, it was the strangest sight—a Muslim chanting the name of a Hindu god. But Khan, described as fair, handsome, tall and strong, was actually calling out to his good friend Bismil. Khan had dropped out of school after Mahatma Gandhi launched the non-cooperation movement (NCM) in 1921. After its abrupt ending he persuaded a hesitant Bismil that he, too, be permitted to join the HRA, despite him being a police officer’s son. Both Bismil and Khan would be hanged on December 19, 1927. The former at Gorakhpur, the latter at Faizabad.

The HRA was formed in 1924, as a reaction to the abrupt suspension of the NCM by Gandhi in 1922 after the Chauri Chaura incident. Radical action to overthrow the British government was the most extreme manifestation of the countrywide disappointment with Gandhi’s decision. Bismil, Sachindra Nath Bakshi, Sachindranath Sanyal and Jogesh Chandra Chatterjee were the founders of HRA. Under Bhagat Singh’s influence, HRA would later be named the Hindustan Socialist Republican Association.

The train action was as necessary as it was audacious. The revolution needed funds—to procure arms, to publish and distribute literature, and to cover basic food and travel expenses of volunteers. Before the action at Kakori, there had been numerous “village hold-ups” that the revolutionaries had successfully attempted.

In his book, They Lived Dangerously; reminisces of a revolutionary, Manmathnath Gupta (who was imprisoned for 14 years) recounts 13 such events which he participated in. These hold-ups targeted local zamindars and money lenders from whom cash and ornaments were to be looted. “Forced contributions” is how Manmathnath Gupta describes them. The yields from such loots were insufficient. There was also the danger of innocent villagers being killed in a crossfire.

The associates then began to debate the possibility of looting a government treasure (for example, a bank). Khan opposed the idea, reasoning that such an act would blow their cover of secrecy and bring the young organisation in direct conflict with the British government. While the group was thinking this over, Bismil took a train from Shahjahanpur to Lucknow. Seated in a carriage next to the one which carried the guard, he noted that at every station the master would come and hand over a bundle to the train’s guard. Bismil guessed that this was the station’s earnings of the day. At Lucknow, the last stop, a coolie carried off a trunk under the guard’s supervision; Bismil surmised that the trunk contained all the bundles collected by the guard.

The train Bismil was on was the 8 Down Passenger, which made a 90km trip. Bismil calculated that the trunk would contain around 010,000 by the time it reached Lucknow. It made sense to loot the trunk after the entire route’s earnings had been collected. Kakori was the penultimate halt. It would also be dusk by the time the train reached Kakori and this would provide cover to the operation.

On August 9, 1925, ten members of the HRA would loot this train after it had crossed Kakori—a small town best known for its mangoes and kebabs, some 18km from Lucknow.

The first attempt had been made on August 8, but as the revolutionaries reached the station, they saw the train whizz past them before its appointed hour. The next day, unwilling to take any chances, they boarded a train headed west from Lucknow—so that they could reach Kakori ahead of time.

When the 8 Down pulled up, Khan, Lahiri and Bakshi boarded the second-class compartment with tickets. They were to pull the chain and stop the train just after it had left the station. Other revolutionaries—Bismil, Azad, Mukundilal, Murarailal Sharma, Kundan Lal Gupta, Manmathnath Gupta and Banwarilal—fanned out through the train’s third-class compartments.

As the chain was pulled, the revolutionaries in the third-class compartments stepped out as though they were random passengers checking the reason for the halt. They then lined the length of the train on both sides, armed with Mauser pistols. They warned the passengers that as long as they downed the window shutters and did not step out no harm would come on them. Bullets were fired to emphasise the seriousness of that injunction.

The guard had meanwhile been overpowered and the iron trunk secured. When the trunk couldn’t be jimmied open with a hammer and chisel, Khan stepped in. But just as the lid of trunk began to give way, the lights of an approaching train startled the group.

The oncoming train (the Punjab Mail) rushed past without stopping. The trunk had by then yielded its treasure (much less than 010,000 though) and the revolutionaries decamped with it.

The next day, newspapers would report that this sensational robbery had been carried out by 20 khaki-clad, masked men. The reports contained another falsehood that three men, including a European had been killed. (One of the warning shots had killed an Indian, but the revolutionaries had not realised it just then.) 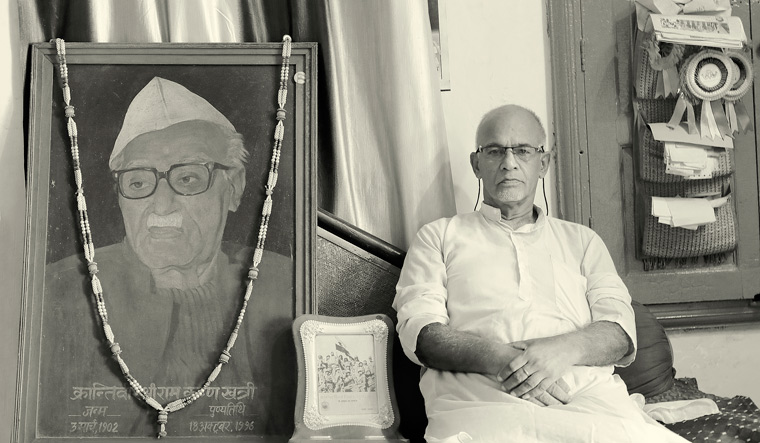 Government action was swift. By September the arrests had started, with Manmathnath Gupta (then only 14) being one of the first. Charges of conspiracy were slapped against 25 revolutionaries; the charge was not merely dacoity, but a larger conspiracy against the empire.

Cases against two accused were withdrawn. Two switched over to the prosecution’s side.

Azad, who had vowed that he would never be taken alive, took his life in a gun battle with the British in Alfred Park, Allahabad, on February 27, 1931. He had meanwhile tried to spring his comrades from jail.

The defence committee for the revolutionaries was chaired by Motilal Nehru. The first hearing was held at a special court in Lucknow in December 1925. The revolutionaries were feted as heroes during their daily transfers to the court from the prison in Lucknow. They used those rides to chant ‘jai’ and sing patriotic songs. For Basant Panchami in 1926 (a festival that marks the advent of spring) they composed a song that went, “Mera rang de basanti chola… [Colour my robes saffron]”. It would go on to become a song synonymous with patriotism and sacrifice in popular culture.

Six months later the case was transferred to the special sessions court of Justice Andrews Hamilton who had the reputation of being a “hanging judge”. On April 6, 1927, Hamilton sentenced Bismil and Lahiri to death. The third death sentence went to Roshan Singh—a surprise as he was not involved in the Kakori action, though he was a member of the HRA.

Jitendra Pratap Singh, 48, the great-grandson of Roshan Singh said that there were very few memories handed down to the family, as Roshan Singh’s eldest son was only 11 when his father was hanged. Of those sentenced to death, Roshan Singh was the oldest and the only married man.

Khan, who had been arrested much later, was sentenced to death in a supplementary trial in which the judgment was announced a month later. This trial upheld the three previous death sentences.

The Kakori action and its aftermath illustrate some of the most sterling attributes of nationalism—among them fearlessness, discipline, and communal harmony. The relative youth of the revolutionaries and the blazing poetry they sang or created had an electric magnetism.

The fascinating stories of the Kakori martyrs continued until their very last day. Lahiri was hanged in Gonda jail, two days before the others. One assumption is that this was done because the British feared there would be an attempt by his comrades to free him. Bismil approached the noose with the cry, “I want the end of the British empire”. Singh walked to the gallows, at Naini Jail in Allahabad with his copy of the Gita. He made one final lusty chant of “Vande Mataram” and “Om” before his smiling face was masked.

Khan’s last wish was that he be given new garments of the finest fabric and itrr (oil-based perfume) for he was on his way to meet his bride—the noose.

Till the end, they remained fiercely brave but identifiably human.

The unmarried Khan, for instance, told his elder brother Riyasatullah, who visited him two days before the hanging, that he desired that a child in the family be named after him. This would ultimately be his brother’s great-grandson—as the family did not want the memory of his name to pain Khan’s mother, Mazhoor-un-nisa, who had nurtured his love for learning.

“People come to his grave to collect the earth and we are invited to functions all over the country. But [the initiative to keep] the memory alive has been largely left to the families”, said Ashfaqullah Khan, 50, the martyr’s descendant.

Bismil, who added to his autobiography until three days before he was hanged (the original manuscript is unavailable) signed it off with the couplet: “…Bismil, Roshan, Lahiri, Ashfaq die tortured, [but] from the stream of their blood will be born hundreds”.

His last plea to his countrymen was, “…whatever you do, do it all together, do it for the good of the country. In this lies the good of all”.

It is a plea still waiting to be heard.