As Biden wants to probe COVID-19 origin, China asks him to look closer to home 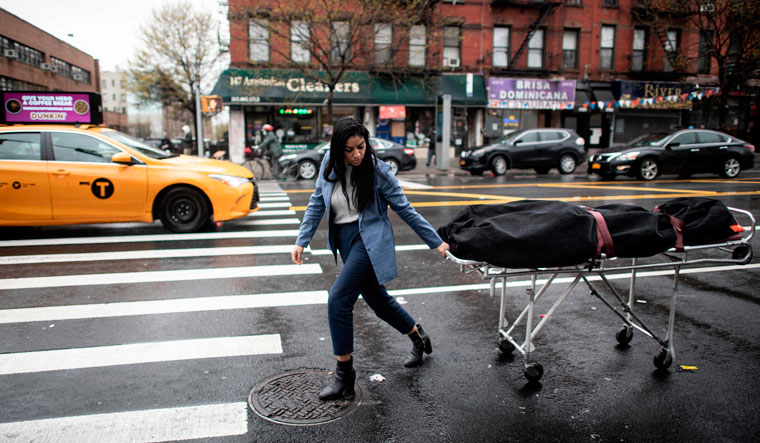 Last ride: The body of a Covid victim being taken to a funeral home in Harlem, New York | AFP

Presidency never stopped Donald Trump from calling a spade a spade, or the coronavirus ‘Chinese virus’. The diplomatic relations between the US and China fell to a new low because of that, and China expected things to only improve when the outspoken real estate tycoon was replaced by a seasoned politician in January. Like a seasoned politician, President Joe Biden stuck to etymology while referring to the virus, but ordered his intelligence officials to “redouble” efforts to investigate the origins of Covid-19, including the theory that it came from a laboratory in the Chinese city of Wuhan.

China, predictably, was not amused. “We warn the world, especially Europe, not to fall into the trap laid by the US. China does not want non-cooperation from any nation based on such unscientific findings of the US,” said the State Council of the People’s Republic of China, the highest administrative body in the country, in a statement to THE WEEK. China even alleged that the investigation was to cover up the Americans’ own wrongdoings. Li Xiaojun, director of the State Council Information Office, Beijing, said it was not Wuhan but a military lab in Maryland that might be the source of the coronavirus. “Biden knows well that the best defence is to attack the opponents. He desperately needs to cover up the wrongdoings of the military lab at Fort Detrick (a US Army Futures Command installation located in Frederick, Maryland) and its labs based in overseas bases as well,” said Li.

China is drawing parallels between the American investigation into Wuhan Institute of Virology and the runup to the 2003 invasion of Iraq. “The US administration has a track record of lying in dealing with other countries. Their army invaded Iraq on the pretext of having weapons of mass destruction. Donald Trump disclosed the truth but the harm had already been done. The Iraqi people are still suffering from that invasion. The US must know that China is not Iraq,” said Li.

Things have not been going well between the world’s two largest economies, which are also the biggest trade partners. While the threat of an all-out trade war is no longer there, a strategic cold war is on. Li said it started with the US’s trade embargo on the Xinjiang human rights issue. Last year the US criticised China on an alleged “genocide” of Uyghur Muslims in Xinjiang. Later it banned some Xinjiang companies that allegedly used bonded Uyghur labourers. Some European countries also decided not to source cotton from Xinjiang province after that. China’s trade was badly impacted, as a result.

Xinjiang connects China with Europe through the ambitious belt and road initiative, a pet project of President Xi Jinping. Xi doused the fire with some deft diplomatic moves that ensured the support of Arab and African countries on the Uyghur issue. “The Americans insisted that the emperor was wearing clothes, and some of its allies agreed. But most other countries, especially Muslim countries, were not fooled by the US. They saw through it,” said Li.

China alleged that like Trump, the Biden administration was also trying to divert attention from the US’s botched-up Covid-19 management. Even when half a million people died in the US, the country failed to take action against those who mishandled the crisis, said Li. “It is a political culture of the US that it does not care about morality or international justice as no politician was punished for the mishandling of Covid-19. Their logic is that they made no mistake and the Wuhan Lab did everything. Senator Tom Cotton and the CIA have already been waiting for this official allegation for more than a year against the scientific findings of most experts in the US and the WHO. It was readily agreed by both the executive and the legislature in the US,” he said.

Republican Cotton has been the loudest voice against China amid the pandemic. “I don’t think that China is going to reveal what happened in those labs anytime soon and they will continue to try to cover it up—and if that is the case it is reasonable for the American people to draw the conclusion that China is covering up an accident in those labs,” he told Fox News.

The State Council believes that the US is worried about China’s economic progress and that the Biden administration has launched a geopolitical war against it. “The US would beat whoever is 70 per cent as strong as it is in terms of GDP,” said Li. “Japan was trampled by Uncle Sam in the 1980s and got stuck in the lost decades. The US contained the EU when the euro started challenging the dominating status of the dollar. They launched the Kosovo war to destabilise Europe. If the US could do the ugliest to them, how could China expect the US to treat it any better?”

Chinese and American economic interests are too intertwined to be separated overnight. And neither country is likely to take it that far. The State Council refused to comment on the concerns about a diplomatic war hurting China more as trade relations might be hampered. Americans have huge investments in Shanghai, Beijing and Hong Kong. According to the Chinese commerce ministry, “in the first quarter of this year, China's exports to the US went up 62.7 per cent and imports from the US increased 57.9 per cent.”

China is not worried about isolation at the moment, as it does not expect Europe to join hands with the US on the virus issue. In fact, the EU and China are planning to seal a trade deal soon. “I don't think the US's EU allies would easily echo its tale like that on Xinjiang,” said Li. “If they do, the US would succeed in sabotaging the China-EU investment deal, which neither the EU nor China would want.”

China claims that the Wuhan lab had closely collaborated with scientists from Europe and the US before the Covid outbreak. “The lab was nurtured by France,” said Li. “The French government gave equipment and shared know-how with us. They also educated the leading scientist Shi Zhengli,” said Li. Shi, director of the Center for Emerging Infectious Diseases at the Wuhan Institute of Virology, is called ‘Bat Woman’ for her work with bat coronaviruses. 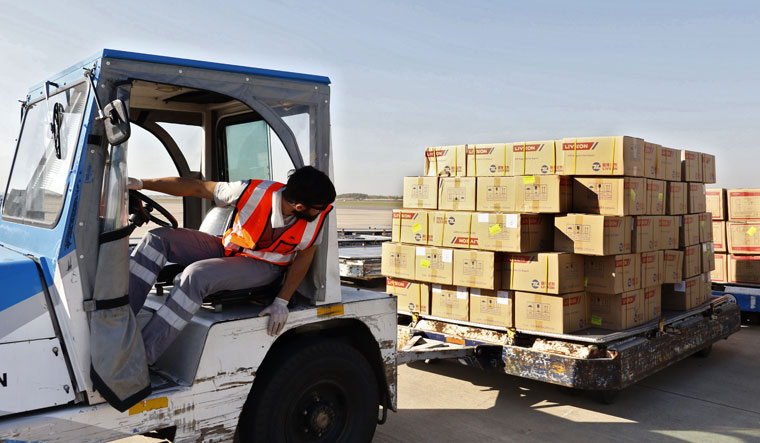 Antiviral load: A worker in Argentina unloading boxes containing medical supplies sent by China for the fight against Covid-19 | AFP

China alleged that residents near the Fort Detrick lab in Maryland were found with infections in the lungs and respiratory system, and flu-like symptoms in the autumn of 2019, a few months before the coronavirus outbreak in Wuhan. Surprisingly, said Li, e-cigarettes or flu were blamed for this and “the US did not carry out any investigation”. But, how did a leak in Maryland reach Wuhan? Li claimed that military athletes from bases near the Fort Detrick lab had gone to Wuhan for the Military World Games in September 2019. “Several of them showed strange symptoms and the US Army sent a chartered plane to take them back to the US,” he said.

Li alleged that blood samples in a hospital in northern Italy were tested positive for coronavirus before the Wuhan outbreak. “The blood samples were taken in November 2019,” he said. In Brazil, he said, the virus was found in sewage water samples in September 2019. “So, China insists that all these be investigated by the WHO. We are not saying that the investigation there should start first and then they should come to us. Let the WHO do the investigation in Wuhan first and then proceed to the US, Italy and Brazil. That's why Trump refused to cooperate with the WHO and deserted it,” said Li.

Xi has already launched a diplomatic offensive by reaching out to China’s allies by offering vaccines. Does he want India to be part of it? “To be frank, no,” said Li. “India knows everything. But we are sure it will maintain silence. It will be reluctant to speak the truth.”

Despite all these efforts, however, the world has not forgotten that the allegation about the virus being manufactured originated in China.It was a Chinese virologist, Li-Meng Yan, who first said the virus was manufactured in a state-controlled laboratory in Wuhan. Chinese authorities said Yan was an employee at Hong Kong University till 2019 and not a resident of mainland China, and alleged that Steve Bannon, former White House strategist and a close aide of Trump, encouraged her to go to the US many months before the outbreak in Wuhan. “She was not at all a virologist,” said Li. “People in Hong Kong could easily go to the US. She doesn't love her motherland.”

Beijing said that Yan might have been involved in the anti-China agitation in Hong Kong and she was used by the US as a tool to hit China when the pandemic hit. “She was a China hater though she is Chinese by name. They have ulterior motives—money, fame or other personal gains,” said Li.

Yan might be right or wrong and her research could only be judged by scientists across the world. But she has managed to do one thing—upset China and push the world to what could snowball into the biggest crisis since the Cold War.