Wuhan is back to normal, but China remains silent about controversial lab 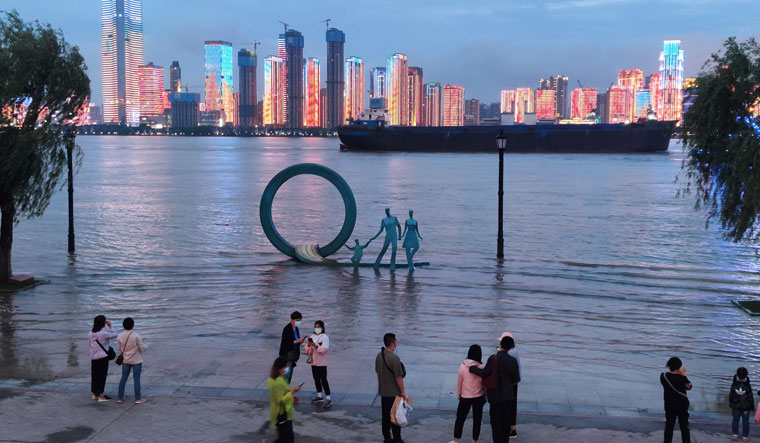 Back on track: People at a riverside park in Wuhan last month | Reuters

After a lull, the Covid-19 virus has come back to haunt China. On May 31, the country reported a sudden spurt in infections, with most of the cases coming from Guangzhou, the capital of the Guangdong province in southern China, located close to Hong Kong. Scientists have found out that the new strain is quite similar to the one which struck India during the second wave.

“We don’t want to blame India. We understand that no country can be responsible for the virus. We are totally with India,” said a representative of the Chinese government. But speaking to Chinese scientists, especially those affiliated to the National Bio-safety Laboratory at the Wuhan Institute of Virology, has become virtually impossible.

A health department official said the Guangzhou cases were a cause of concern. “Vaccination efforts have been intensified because of the sporadic outbreaks. On May 29, nearly 12 million people from Guangzhou received the jab,” he said. In Beijing, the vaccination rate is around 80 per cent. The rate was a little low in major cities except Wuhan, but with the virus making a comeback, the speed of vaccination has increased.

So far, around 66 crore Chinese—nearly half the population of China—have been vaccinated. Even when the infection went down last year, China did not stop the measures to take care of its people.

“We still wear masks while meeting others. And going to public places requires health codes and temperature checks. Face masks are mandatory on public transport,” said the official. China has been using three vaccines to inoculate its citizens. Sinopharm and Sinovac are the most commonly used ones. A few cities like Shanghai have started the one-dose adenovirus vaccine, Ad5-nCoV. “India should take our one-shot vaccine which is being used in Shanghai. It could save many lives,” said the official.

Except for Guangzhou, which has now been locked down, it is business as usual in China. With adequate precautions, people are free to travel without any restriction. Wuhan, however, is still a matter of concern. While Chinese officials claim that life in the city is back to normal, they are reluctant to speak about the lab and the virology institute.

The Wuhan Institute of Virology, which is under the Chinese Academy of Sciences, was set up in 1956. The National Bio-safety Laboratory at the institute which deals with the Covid-19 virus was built in 2015 with the help of the French government. “Chinese scientists shared the sequencing of the virus with the international community in January 2020, within two months of the outbreak. Without that, it would have been almost impossible for Pfizer or Moderna to invent their vaccines in a very short span of time,” said an institute official. But critics allege that the quick initiation of gene sequencing after the outbreak pointed to a possible mishap.

The Wuhan lab is the only BSL-4 (bio-safety level-4) lab in China. There are about 50 such labs all over the world, including two in India. The institute official said the leaking of the virus was absolutely impossible. “There is one section in the lab where foreign scientists conduct research. Would they not have raised the alarm?” he said.

Virologist Amitava Nandy, who was consultant to the World Health Organization and the Indian Council of Medical Research, said the virus might not leak on its own, but warned that accidental leaks through human contamination was possible. “Scientists or researchers could get infected and they could contaminate the local population. So nothing should be ruled out,” said Nandy. Even the BSL-4 labs are not totally safe, he said. “There is special protection in such labs. Fluids are not released, machines are all protected and guarded. There is no leakage or stealing of items. Every apparatus is taken care of and outsiders are not allowed. But what happens if someone gets infected due to an accident?”

Chinese authorities could not explain why the only BSL-4 lab in the country was located in Wuhan. Most of China's BSL-3 labs are located on the coast, but Wuhan lab is located far away, nearly 800km from the coast. “It might be because Wuhan is centrally located and is part of the south China districts which have a shocking history of infectious diseases,” said an official.

Notwithstanding the controversies surrounding the Wuhan institute, it plays a critical role in China's advancements in the field of life sciences. It is well known for its research into the human immunodeficiency virus (HIV). The institute has a complete database of viral sensitive cells, viral genetic resources, wild animal pathogen hosts and viruses. The Chinese Academy of Sciences, which oversees the institute, holds more than 1,500 isolates of various types of viruses and 1,17,000 copies of all types of virus resources. The collection includes human medical viruses, zoonotic viruses like the Covid-19 virus, animal viruses, insect viruses, plant viruses, bacteriophages, environmental microorganisms and virus-sensitive cell banks, which play an important role in the research on national security, life sciences and population health.

“One should know how comprehensive our institute is. We deal with rare and very important viruses in our region and we upgrade ourselves periodically. We are setting up three or four more such laboratories,” said a senior professor affiliated to the academy. “Politics is about promoting the interests of politically motivated groups. Science, unfortunately, is dangerously slipping into the trap of politicians.”