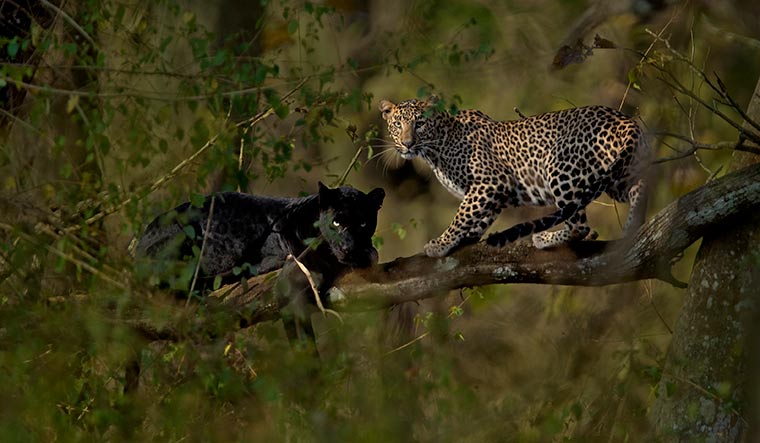 Last year, the picture of a black leopard, Saya, and his mate, Cleopatra, caught the attention of the country. The elegant couple was captured in a rare moment that seemed more studio photography than real life—the lady standing in front, her dark knight behind, almost like a shadow in the early morning light, as they look straight at the camera, both at just the same angle.

Even a year later, the photographer, Mithun Hunugund, 33, gets transported into the magic of that day. He had been on a safari at Kabini, one of the most mesmerising forests of the Western Ghats. “I knew the couple was nearby, I had seen them a week ago together,” recounts Hunugund. “They had made a sambhar kill near a stream, which would keep them fed for some days, at least. It was mating time; they would be together. And, every day I prayed that they should not emerge during the time of my safari.”

He kept watch on a pathway that was Saya’s favourite route, and one morning, at 7:30am, the couple emerged. “He was skittish, but she was confident, leading the way,” says Hunugund. As they paused, he went trigger-happy, and got a picture which “rarely happens in wildlife photography, when everything falls into place”.

The couple may have debuted into mainstream reckoning only a year ago, but their love and life are the high points of the jungle’s social circuit. And Hunugund has been a steady chronicler of their Page 3 events since 2014. The electronics engineer, who grew up around the Dandeli forests in Karnataka, thanks to his father being in the forest service, knew the jungle was his calling.

When the National Geographic Channel contacted him for a documentary on Saya, he left the world of software behind for good. Saya is that typical hero of fiction. Dark, brooding and of unknown heritage. No one knows where he came from, because this spot of Jungle Book had never had a Bagheera before. The forest already had several dominant males, each with its own territories and harems. Three-year-old Saya was the young outsider who lurked in the shadows which camouflaged him best; the dun landscape of the day, which hides leopards, vulnerably exposed his dark form. 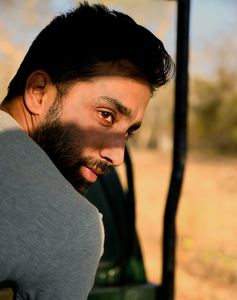 From the moment that Hunugund first saw him in October 2014—he was so stunned by the image of the black cat that he forgot to click a picture—Hunugund has followed his career, documenting the journey of the shy outsider to the dominant male of Kabini. “I have seen him grow in confidence as he gained territory and acquired mates,” says Hunugund. He has fought with seven other males to carve out his territory—which spans around 40sqkm of the forest—and acquire some of the most sought-after women for his harem. Apart from Cleopatra, his favourite, are Mist, a blue-eyed beauty who is most active on misty mornings, Kate, and Rock Lady, named after the rocky patch she loves to lounge in.

It is Saya’s romance with Cleopatra that is, however, the stuff of scandal and gossip. She was earlier the favourite of Scarface, a regal leopard, who is now around 13 years old. Saya had his eyes on her and wooed her persistently. Cleopatra succumbed to the dark hero’s charms quickly enough, and this brought Scarface into Saya’s newly acquired territory. Saya emerged as the hero in this battle, allowing Scarface to retire with his other women to another patch of real estate, where he still rules. Saya, however, is the alpha male, now in his prime at nine years of age. “He no longer lurks in the shadows, he struts with confidence even in the open,” says Hunugund. Their romance still sizzles with chemistry and electric currents, he laughs. She is no blushing bride. She takes the lead, and he allows her to dominate. This is not a concession Saya allows the other women in his life.

Though he follows several leopards and their lives, Hunugund has a special affiliation to Saya. “Despite the disadvantage of his colouring, he has acquired alpha male status,” he says. “He has learnt to use his colouring to his advantage, where possible, and work his way around it elsewhere.” He knows the individual characters of each leopard he has filmed and is amazed at how they are so different, despite generalisations. Do the leopards know him as well? “I guess they do, they are smarter than we give them credit for,” says Hunugund.

He conducts tours for all kinds of people, from researchers to simple tourists. He goes with them across the country, and even to Africa. But these forests are his home territory, like Saya, this is where he has carved his niche. The forests and their denizens—humans and animals—fascinate him. People talk of protecting forests, he says, they should focus on conservation instead. An effort that takes the locals as stakeholders is sustainable, and the best way to protect this wilderness, keep the poachers and developers at bay.

Hunugund is waiting for at least one of Saya’s offspring to be a black cat. Saya’s unnatural, melanistic colouring is due to a recessive mutation. What this means is that the gene should be in two doses for a leopard to be black. The best chance—50 per cent—of this is if Saya mates with one of his offspring, who carries the dark gene. If two of his offspring, who carry this gene, mate, there are chances, though lower, of a dark baby. He has introduced an interesting gene into the otherwise dull pool. Now nature has to play her role.

Will there be more black cats here someday? “We are waiting,” says Hunugund, smiling.