High on grass: The story of a botanist’s discovery and rediscovery 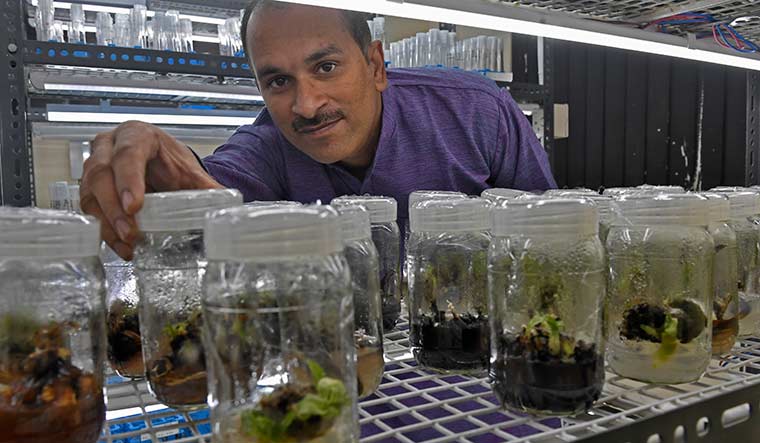 Mandar N. Datar, 43, was excited when he led a team that discovered a new species of grass in 2016. They named it Ischaemum agharkarii after S.P. Agharkar, the founder-director of Agharkar Research Institute, Pune, where they work. The team had found the grass growing in a clump near an industrial estate in Talegaon, on the Mumbai-Pune highway.

Several months later, when Datar visited the site, he was shocked to note that a landscaped garden around a new factory had replaced the fallow field of his discovery. This is the fate of so many new species of flora and fauna that are discovered in the Western Ghats, the sobriquet “biodiversity hotspot” ringing true, because of the various threats to their existence. Many of the species are so endemic here that they may not even be found in the next plateau or hillside.

Then, a year or so later, Datar got a call from an acquaintance in Talegaon, who had seen some plants growing on the terrace of his factory and wondered if they were the same as the former’s discovery. He rushed to the spot with a clutch of botanists. The rediscovery of this species—for it indeed was the same grass—was an even greater event than the original find. Datar was lucky that the factory owner was an amateur botanist himself.

Terrace tops and window ledges of high-rise buildings now replicate cliffs, in supporting flora and fauna that tend to cling tenaciously to windy outcrops. The “urban cliff hypothesis” was first suggested by Douglas Larson of Canada. Pigeons in cities are an example of successful adaptation to the urban cliffs, as are certain ferns and grass.

Datar, however, has not let his discovery survive on chance alone, anymore. He has successfully propagated the plant with seeds and keeps a patch of it growing in his home garden, too.

In the northern part of the Western Ghats—Goa and Maharashtra—rocky outcrops form a distinct feature. These are tracts of flattened land that jut out of cliffs. Outcrops stand out in isolation from the surrounding plains. They are called inselbergs, and, like the Galapagos islands, isolated evolution has created many unique life forms in them, which today’s new band of explorers find thrilling to discover.

Datar went on to be part of the discovery of five other species of plants, one of which was another grass that grows in the rocky outcrops in Goa. There is something very intense about life in these outcrops. They are exposed to harsh sun, whipping winds, and lots of rain in the season. The soil is nutrient-poor, as minerals leach out. “Life here gets adapted to eight months of drought, and four months of monsoon. Most plants and animals, therefore, live intensely during the monsoon months, mating and reproducing,” says Datar. They have formed complex inter-relations, which are so fragile that even a small anthropogenic change can upset the entire web of life.