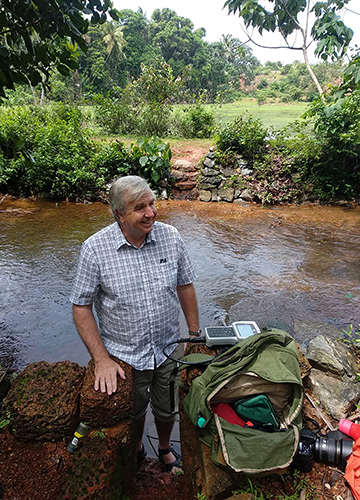 Christopher Thorpe, 65, first toured the entire length of the Western Ghats as a 20-year-old backpacker, travelling by bus and train right down to Rameswaram, completely enchanted by the beauty of the landscape. However, it was only in 2008 that he started looking at this ancient land as a living laboratory to study adaptation and evolution. He had come down with members of the British Herpetological Society to visit herpetologist Gerry Martin’s fabled farm on the Karnataka-Goa border, when he was struck by the awesomeness around him. “We went to a rocky plateau looking for reptiles and amphibians, and I saw frogs breeding in a puddle just two inches deep,” says Thorpe. “And I realised just how strong the adaptations here were, how delicate the balance of life. If one year, it does not rain at the right time, this entire species of frog will be wiped out completely.”

Thorpe began working in the Western Ghats as a “proper scientist” in 2012, and over the last 11 years, has done intense research on the biogeography of the region, especially, the outcrops of the northern part of the Ghats. “These isolated bits of land have not changed climatologically for at least 60 million years, a long period for evolving,” he says. “Animals which decided to occupy a space which no one else wanted to live in have little competition, but they have to adapt themselves to the extreme harshness of the land. This is why the range of adaptations we see here is much higher than in forests.”

Amphibians, for instance, have multiple spawning in one season and undergo rapid development during the benign months of rain. Each animal has adapted itself so intensely to its small niche that often within a 10km span, one toad could have evolved into three different species. The variations are so minor that often, the differences are only picked up at the molecular levels.

Many of his studies are on fauna that is “less exciting to people”, like ants. However, ants form a vital link in the amphibian food chain, and any impact on their population impacts the frogs, directly.

Thorpe recalls his first walk in Chorla Ghat, and how dramatically the scenery changed over just a few kilometres. “We crossed a stream, trekked through some paddy fields and entered a forest, which then opened out onto an expanse of bare rock, with just one stunted tree growing on it,” says Thorpe. “Is it any surprise that the biodiversity here is so rich and unique?”

Much of his work focuses on the anthropological pressures on the Western Ghats. As he notes with the toads, the speciation is so localised that land use pattern change in even a small region could cause the extinction of several species.

Thorpe, who is with the University of Plymouth, is also part of an inter-institute project on the feasibility of aquaculture of freshwater crabs in India.