From surviving COVID-19 to coming second in marathon 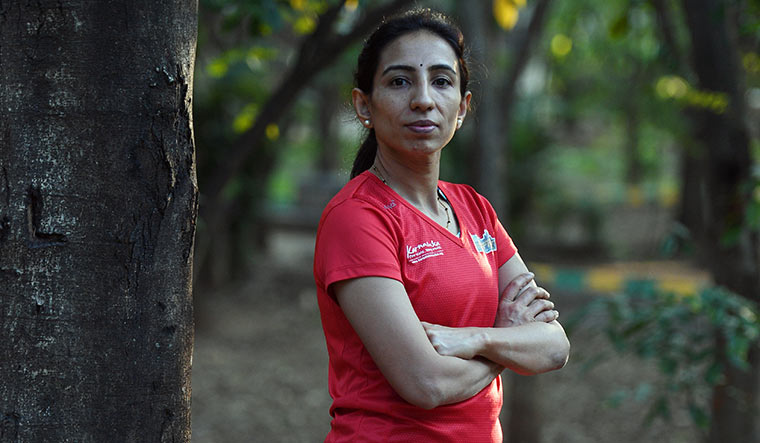 Dr Anuradha H.K. sensed something amiss while making breakfast for her daugher Ela. She had picked up a bowl which had coffee decoction in it, but she couldn’t smell the coffee.

Anuradha, a consultant neurologist at Aster CMI, Bengaluru, had taken up a running challenge at that point in time. She was supposed to run daily for 100 days. She managed to stick to the commitment for 87 days, running an average of 80km per week. On the 88th day, she felt dizzy while running. Then it struck her that two days ago a friend told her that her voice had changed. It had completely slipped her mind.

The 42-year-old soon tested positive for COVID-19. She managed to remain hopeful and optimistic during the first two days of the illness. “I would walk 3km inside the hospital at a slow pace,” she says. But on the third day, her oxygen saturation levels dropped and she could barely walk. “I got a CT scan and was diagnosed with pneumonia. It was mild to moderate. I did not require oxygen but I had to get some injections,” says Anuradha.

What bothered her the most was the state of her lungs. In healthy people, the lungs expand, the moment oxygen goes inside. It is then passed into the blood vessels and carried around the body. “My lungs felt like rubber. They just wouldn’t expand,” she recalls. An avid runner, Anuradha has taken part in more than 50 marathons in the last three years. Still, she wasn’t even able to do the exercises she was prescribed to improve her lung function. “It was quite depressing. I didn’t know when I would get back to normal living and I was really concerned about my family, especially Ela, who is just eight years old. I had severe panic attack and anxiety. While in hospital, I used to talk to Ela over video calls. Every time I would worry whether I would get to talk to her once again. COVID-19 was so unpredictable at that point in time. Nobody could predict who would survive.”

Anuradha recovered quickly though. Thirteen days after the diagnosis, she went back to taking care of her patients. “I could run my OPDs. However, my heart rate would go haywire while walking. For runners, the resting heart rate is usually less than 60. My heart rate was normal when I rested but it would shoot up quickly when I walked. So, I was advised not to do heavy or moderate exercises for two months,” she says.

After a month, she started walking. She would slowly walk, keeping a check on her heart rate. She missed running and her mind would flash back to her running days in Lucknow. “I started running while in Lucknow. I would finish my rounds by 4pm, go to the ground and run for about half an hour to 45 minutes before returning to the hospital.” In 2017, she did her first 5k. Later, one of her doctor friends registered her for a 10k in Cubbon Park. That was her first registered run. There was no looking back after that. “I took part in the Auroville Marathon (42k) in February 2018. That was an amazing event. I made lot of friends, and joined a running group,’’ says Anuradha.

Two months later, she got back into running. “On day 1, I was a bit nervous. I didn’t go far from the house. Slowly, in about 2-3 weeks, I picked up my pace. I concentrated on breathing and did yoga and pranayama to improve my lung capacity. One and a half months later, I was doing better than how I was doing during pre-COVID times,’’ she recalls.

Nonetheless, running a marathon after COVID-19 was no cakewalk. “For one, my husband was not very keen on me returning to running, barely eight weeks after recovering from COVID-19. He’s a cardiologist and I had a tough time convincing him. I ran on a treadmill in front of him and also got my echocardiogram (ECHO) and treadmill (TMT) tests done. Finally, he gave me a go-ahead though not completely convinced.”

Anuradha made a strong comeback at a stadium run conducted by NEB at Jayaprakash Narayan Stadium in Bengaluru. “I took part in a category wherein participants must have completed a stadium run covering a distance of 60km in 12 hours, without taking breaks for more than 10 minutes at a stretch.” Her strategy was to cover maximum distance in the first half. “The second half tends to be more difficult. Your endurance comes down, your muscles start aching and your mind wants to give up. So, it’s better to cover more distance in the first half.”

Anuradha finished second at the marathon. Did she feel like giving up at any point in time? “Not really. I had no injuries either,’’ she said with a smile.

That said, she felt like quitting in the middle of the Malnadu ultra a few years ago. “I took part in it twice. Both the times, I struggled because of the tough terrain and weather conditions.” However, she managed to complete both times.

This time around, she had to face a different set of challenges. “If you don’t run for a couple of weeks, your endurance and lung capacity go down. It’s like you are going backwards,” she says. However, with grit and resilience, she overcame the hurdles along the way.

Far from resting on her laurels, Anuradha gets up at 4.30am and kickstarts her day with a run. She prefers to cook her own meal. You should know what you eat, she reasons. She finishes her household chores by 9.30am and then heads to work. After coming back home, she spends quality time with Ela. Before going to bed, she likes to read a bit or listen to Carnatic music.

The marathon runner is at peace now.