We will ensure that anti-CPI(M) votes come to us 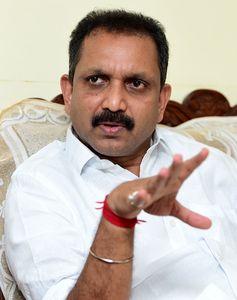 Q/ The BJP has long been trying to make deep inroads into Kerala. How hopeful are you this time?

A/ The people are fed up with both the fronts, and realised that they are two sides of the same coin. It is evident that they want change. They have welcomed us to their space, and this welcome will translate into votes this time.

Q/ What is stopping the BJP from becoming a strong electoral force?

A/ There are multiple reasons. We could not project a winning proposition, for one. Also, many of our candidates did not have mass appeal beyond party lines. Thirdly, the minorities—both Muslims and Christians—voted en bloc against us. All these factors will see a positive change this time.

A/ I cannot reveal the strategies, obviously. But you may have already noticed that the party has become more acceptable to prominent personalities in the state. When revered persons like [technocrat] E. Sreedharan and [former IPS officer] Jacob Thomas join the party, it shows the acceptability that the BJP is gaining. Many more prominent personalities will be joining the party soon. We will win many neutral votes this time.

Q/ How will you address the other issues?

A/ Till recently, minorities had been voting for the UDF en bloc. That trend is changing, at least in the case of Christians. They are no longer the solid vote bank of the Congress. They are divided among three fronts now. This is a crucial factor that is going to influence the elections. The warmth between the BJP and the Christians has certainly increased.

A/ I am being realistic. There are 42 assembly constituencies where the BJP had won more than 30,000 votes in the previous elections. If we can add a few thousands to that number, we would change the game.

Q/ Which is your major opponent—the UDF or the LDF?

A/ We fight both with equal intensity. If you take the assembly constituencies where we came second, you can see that both fronts have won those seats. If we have to wrest them, we have to fight both the fronts.

Q/ But elections are like war. In a war, you need to know your major enemy.

You can’t single one out when both the fronts have joined hands to defeat us. I will tell you one thing—this time, the UDF will not be able to take advantage of the anti-CPI(M) votes canvassed by us. We will make sure that those votes come to us.