Looking for a lifeline 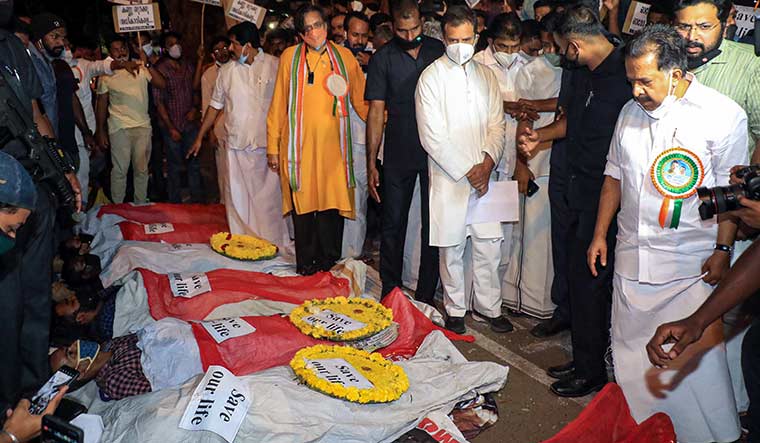 An interesting political churning is happening in Kerala, courtesy Rahul Gandhi. After the Wayanad MP’s recent Kerala visit—during which he participated in a tractor rally with farmers in his constituency and went swimming in the sea with fishermen off the coast of Kollam—the CPI(M) and the BJP have started doing the same things with similar intensity. Both have launched an all-out attack on Rahul. Party workers circulated memes making fun of Rahul’s “theatrics”, and the CPI(M) mouthpiece, Deshabhimani, has dedicated huge space to carry stories criticising him.

The BJP leaders, including party chief J.P. Nadda, accused Rahul of disrespecting North Indians and trying to “divide and rule”. The left leaders, including Chief Minister Pinarayi Vijayan and the CPI(M)’s acting state secretary A. Vijayaraghavan, attacked Rahul for seeking refuge in Kerala instead of fighting the BJP in the north. They alleged that Rahul was helping the BJP by attacking the left front in Kerala.

There is nothing new in the BJP’s criticism of Rahul, but the CPI(M) attacking him is a new turn in Kerala politics. This vehement criticism of Rahul assumes significance because the CPI(M) has always been soft towards him—even after his candidature in Wayanad, which decimated the left in the 2019 Lok Sabha elections. And, this turn gives one some clues on the direction in which the state’s electoral politics is heading.

The LDF, which senses a possibility of returning to power, knows it all too well that Rahul could scuttle its dream. “The Gandhi surname does have a connect in Kerala from the times of Indira Gandhi and this affection exists cutting across all communities,” said writer Paul Zachariah. Senior journalist and human rights activist B.R.P. Bhaskar said that Rahul is the trump card that will help the Congress defeat the LDF. “All the good governance of the LDF and the social engineering that it did in the last four years will not stand a chance if Rahul can create a wave as he did in the 2019 Lok Sabha elections,” he said.

And, the Congress, too, knows it well. The party has ensured the presence of both Rahul and Priyanka Gandhi in the assembly election like never before. “Rahul Gandhi will lead us in the elections,” said Kerala Pradesh Congress Committee president Mullappally Ramachandran. “He will certainly ensure the victory of the United Democratic Front,” UDF constituents also have made similar demands to him. “We have conveyed to him that it is not an easy fight for the UDF this time, and that he must spend maximum time in Kerala,” said K.P.A. Majeed, state general secretary of the Indian Union Muslim League (IUML).

Another development is the complete surrender of the state leadership of the Congress to Rahul. “The state leadership has realised that it cannot win the election without Rahul playing an active role,” said senior journalist Jacob George. “So, the same leaders who had publicly told him not to meddle in Kerala matters, and had even refused to cede seats to Rahul nominees, are now desperately after him to take the lead.” George added that Rahul will be more assertive this time when it comes to choice of candidates.

But there is a section that thinks that photo-ops of VIPs fetching votes is a thing of the past. “People getting awed seeing Rahul Gandhi eating in a poor man’s house or hugging a fisherman is gone—at least in Kerala,” said D. Dhanuraj, chairman, Centre for Public Policy Research.

Political observer George Podippara said that the humiliating defeat in the recent local self government polls has come as a blessing in disguise for the Congress-led UDF. According to him, the party has done some serious introspection and has identified the areas where it went wrong.

The primary reason for the UDF rout in the LSG election had been the loss of Christian votes, a solid vote bank of the Congress ever since the state was formed. The ouster of the Kerala Congress (M) from the UDF, the tussle between Orthodox and Jacobite factions and the ever-widening rift between Christians and Muslims also contributed to their loss. The perception that the IUML has an upper hand in the UDF alienated the Christian voters. The IUML’s aggressive posturing on the issue of Hagia Sofia church in Turkey, and the reservation introduced by the LDF government for the forward-caste poor also did a lot of damage to the UDF.

The Congress seems to have understood the precarious situation it has landed in following the shift of Christian votes. Bringing former chief minister Oommen Chandy back to the forefront of the party affairs was done to offset this. Political Observer Joseph C. Mathew said that Chandy’s entry has changed the fortunes of the Congress party. He feels that projecting Chandy as chief minister candidate will improve the chances of the Congress.

Another factor that may inadvertently work in favour of the Congress is the general perception that Congress will wither away if it does not come to power this time. “A huge section in the Kerala society, especially the Muslims, does not want to see the Congress getting eliminated,” said Dhanuraj. “So, there is a strong possibility for a 2019-like consolidation of Muslim votes in favour of the UDF.” The Congress party’s condition in other states—from Punjab local-body polls to the party’s decision not to contest the Rajya Sabha election in Gujarat to the fall of the Congress government in Puducherry—will also resonate in the election narratives in Kerala.

Political observers agree that the Congress has recovered from the defeat it faced in the local body elections. Aishwarya Kerala Yatra led by opposition leader Ramesh Chennithala, according to them, has received a warm welcome statewide. Podippara said that the Congress party has realised that winning the assembly elections is a matter of survival for them. “It is a do-or-die situation for the party,” he said.