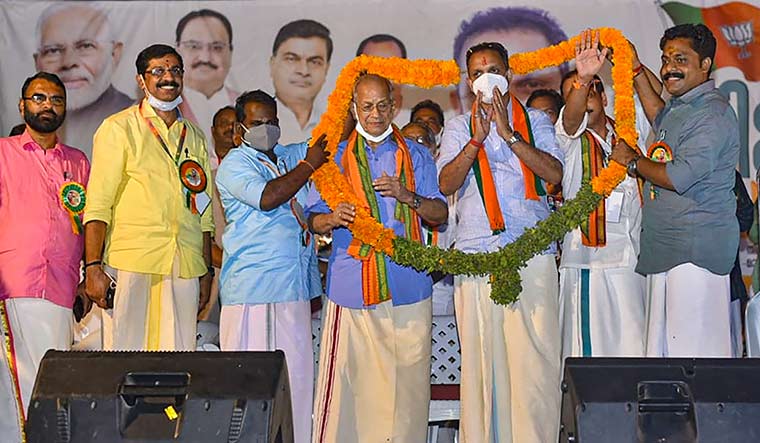 New mascot: E. Sreedharan being inducted into the BJP at an event in Malappuram on February 25 | PTI

Pralhad Joshi, Union minister for parliamentary affairs, was in Kerala recently to chalk out the BJP’s election strategy. “We need surprising results,” he told NDA allies in a closed-door meeting. He reiterated the same while addressing the media. “Wait for more surprises,” he said. The saffron party would need a truckload of surprises to make a mark in Kerala.

Its state unit was formed in 1981, and Kerala has flummoxed the BJP ever since. Two factors have been responsible for this— Muslims and Christians forming a significant percentage of the population, and the fact that the Hindus were mostly communists. Its only major achievement so far has been getting one of its founding members, O. Rajagopal, 91, into the assembly in 2016.

“The state’s intrinsic inclusive nature is against the BJP,” said writer Paul Zachariah. “If the BJP wants to grow in Kerala, it needs to make some smart moves tailored to Kerala.” The party seems to have realised this. Unlike previous elections, the central leadership has got involved directly this time and is in touch with community leaders and other stakeholders.

A non-Malayali RSS leader, who requested anonymity, is the liaison with certain minority groups. He told THE WEEK that Kerala is not seen as an insurmountable terrain, despite “certain demographic peculiarities”. He added: “The party has a strong organisational network and has won the admiration of the youth and the aspirational middle class. What we need are prominent faces who can translate these factors into votes.”

‘Metro Man’ E. Sreedharan and former director general of police Jacob Thomas, who has the image of being an anti-corruption crusader, have already joined the BJP. If party insiders are to be believed, more prominent personalities are being lined up. But, how effective will they be? “These personalities do have a positive image in Kerala and will certainly give more legitimacy to the BJP,” said J. Prabhash, former head of political science department, Kerala University. He added that while such names may help in the long run, it is doubtful how much their presence would benefit the party this time. D. Dhanuraj, chairman, Centre for Public Policy Research, said: “Election is a different ball game. These VIPs, who have no direct connection with people, will not be able to do much for the party.”

The BJP is also trying to identify which opposition party to target. Nadda told The WEEK that both Congress and the CPI(M) are equally bad for Kerala and that the BJP would fight them equally. But, in an electoral conflict, it is sound to identify the main enemy, and the BJP knows it all too well. In West Bengal, it used the Trinamool Congress against the left.

“The BJP, being an ideological party, knows that an ideological party is its biggest enemy,” said political critic A. Jayashankar. “So, it will try to finish off the CPI(M) first.” He added that if the BJP was to decimate the CPI(M), its primarily Hindu followers may shift sides. But, there is also another strong view. “The BJP tried all possible tricks to malign the left government using agencies like the ED and the Customs,” said political commentator Jacob George. “But the local body election result proved that the people of Kerala did not believe any of these allegations. So the BJP seems to have come to a conclusion that the Congress is the easier target.”

The BJP has been eyeing the Christian population in the state for quite some time. “The BJP needs at least the partial support of one minority community,” said Dhanuraj. “And it knows that the Christians in Kerala are more likely to join hands with it [than Muslims].”

Despite the high number of RSS shakhas in Kerala (one of the highest in the country) the BJP had never been a talking point in the state till it came to power at the Centre in 2014. Its vote share rose from 10.45 per cent in the 2014 Lok Sabha elections to 15.64 per cent (NDA) in 2019. In the 2016 assembly elections, the NDA got 14.64 per cent of the votes and the BJP came second in seven constituencies. State BJP president K. Surendran lost by just 89 votes and that, too, because of a tacit understanding between the Congress and the CPI(M). It is in power in two municipalities and finished second in Thiruvananthapuram corporation.

Dhanuraj said that the BJP was not likely to add to its lone assembly seat. “But given the fact that the winning margin in most seats in Kerala is low, the votes it captures will have the capacity to determine the winner.” Surendran insisted that there would be a three-way fight in all 140 seats. “Our [candidate] list will have a long list of very prominent persons—both young and old,” he told THE WEEK. “We are contesting to win this election. If not, you call me on counting day.”

An RSS insider, however, said that this election was not the real target. He said: “This is just a trial run before we capture power in 2026.”

If that happens, it would be a real surprise.