We have been accountable 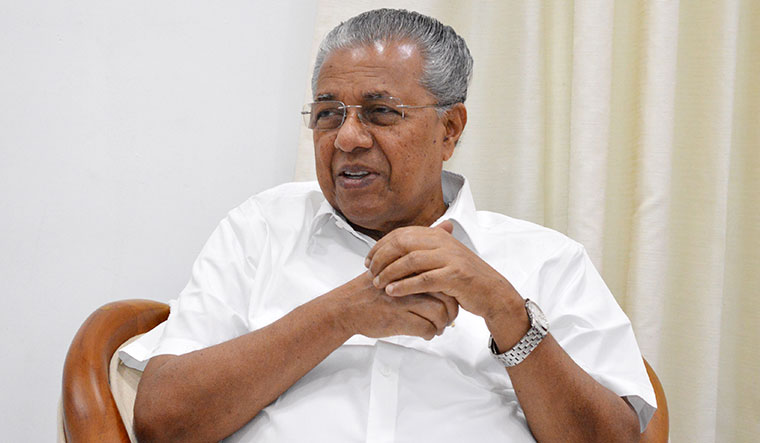 From floods to Covid-19, Chief Minister Pinarayi Vijayan’s leadership during crises was evident. He also established himself as a hard taskmaster. There was direct involvement of the chief minister’s office in all aspects of governance and hence both merits and demerits will be attributed to Vijayan. He spoke to THE WEEK about being confident about a second term and about allegations and controversies. Excerpts:

Q/ The LDF seems confident of a second term, something which has not happened in Kerala’s recent history. What gives you this confidence?

A/ We are confident because we have delivered on our promises and much more. Even amid severe and repeated challenges like floods or Covid-19, development and welfare did not take a hit. We ensured that no one went to bed hungry in Kerala, even in remote and tribal areas. All the basic requirements of the people were taken care of and we have been accountable. Naturally, the people stood with us [during the local body polls] and they trust us. They know that education, health, welfare, development, jobs, secularism and sustainability are sure with the LDF at the helm.

Q/ Congress has brought the Sabarimala issue back into political discourse. In the 2019 general elections, the LDF paid the price for its perceived overzealousness in implementing the apex court’s order. Do you fear it will come back to haunt you?

A/ The matter is under the consideration of the Supreme Court. Anyway, I do not think that it is an issue at the moment.

Q/ The main allegation against all the previous LDF governments has been that it is a rule by the party for the party. The same allegation has been raised against your government, too. Your thoughts?

A/ No one in their right mind can make such an allegation. Take a look at all the 140 assembly constituencies and assess whether development and welfare initiatives were taken up on the basis of political or partisan considerations. We evolved a holistic approach covering all sections, irrespective of their faith and politics. Welfare measures and development have reached every nook and corner of the state.

Q/ Your government shined during crises. But, certain errors of judgment by you have landed the government in controversies like the gold scam and the ongoing Public Service Commission rank holders’ agitation for government jobs. How do you explain such lapses?

A/ None of these allegations have substance. We have seen the opposition backtracking on its own allegations. As far as the PSC is concerned, this government has made record appointments and created the most number of posts ever. Controversies are the results of political manoeuvrings, not any erroneous judgment on the part of the government. That the people of Kerala could see through all these baseless allegations and reject them was proven when the LDF got a landslide victory in the local self government elections. The assembly elections will prove that once again.

Q/ There is a strong perception that the chief minister’s office is “all powerful” and that while this may have improved coordination, it has also led to centralisation of power. How would you respond?

A/ During the last five years, the local self-government institutions were strengthened more than ever before. They are playing a lead role in disaster management, waste management, food security, community kitchens, public health and public education. I am sure you have seen how local plan fund expenditures have been hovering above 90 per cent in successive years under our tenure. Even in managing Covid-19, decentralised efforts were made. When they are the drivers of our development and welfare measures, how does the question of centralisation arise? Had the system not been decentralised, the fight against crises would not have been successful. You said there was better coordination. That coordination is there in every realm of administration.

Q/ Your government’s strong “pro-development” agenda has been criticised as “right-wing deviations”. How would you respond?

A/ The LDF government has been presenting alternatives to existing models. To us, it is the people and their issues that matter. Solutions have to be found within the limits of our laws and the contours of the Constitution. We also have to think outside the box to come up with innovative solutions. KIIFB (Kerala Infrastructure Investment Fund Board) is one such innovation. People think that we have been able to make the impossible, possible, to a certain extent. It is about staying true to the aspirations of the people, while not letting go of our core values like democracy, secularism, federalism and sustainability.

Q/ Rahul Gandhi played a crucial role in the devastation of the LDF in the 2019 elections. Are you worried about him now?

A/ People come and go, but politics remains. Elections are fought on the basis of issues and not on individuals. The people of Kerala are well aware of all that.