The mother of all myths 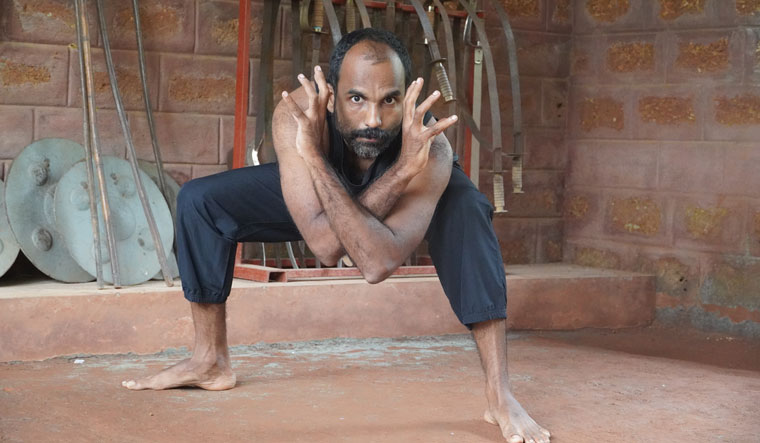 Kalaripayat, India’s most evolved martial art, has a rich and colourful history. But the first attempt at a comprehensive documentation of its training regime was made only in 1963, when Chirakkal T. Sreedharan Nair, who taught at the YMCA College of Physical Education, Madras, put in black and white the oral tradition that was the basis of the secret art of fighting. Not many kalari practitioners were impressed.

For centuries, kalaripayat exponents had trained in dugouts without any textbook. The gurukkal, or the master, was the textbook, and students learned from him. The two aspects of kalari—vaythari or the oral commands, and meythari, the physical action calibrated by the former—were open to all students, but the chosen few were allowed access to the distilled wisdom the guru accumulated over the years. The oral tradition, to an extent, continues in kalaripayat even today. At the end of the evening practice, the inquisitive sit with the guru to clear their doubts and have debates.

On one such evening at the C.V.N. Kalari in Kaduthuruthy (currently E.P.V. Kalari) Kerala, I posed a question to the legendary E.P. Vasudevan Gurukkal, whom the BBC featured in its 1984 docu series The Way of the Warrior. I asked him: Was kalaripayat the mother of all martial arts? Did the Buddhist monk Bodhidharma carry the knowledge from south India to China?

The gurukkal raised his bushy eyebrows and dispelled my doubt in two sentences. “Martial arts were born from local needs and were closely linked to the physical characteristics of the people of the region in which they originated,” he said, adding his usual rider. “Of course, you need not believe what I say; seek the truth yourself.”

And so I set out.

A lot of people assign martial arts motherhood to kalaripayat, citing its long history and similarities with martial arts that evolved later. An opposite school of thought says that similar circumstances may be behind the similarities. We can connect the two streams to the theories of monogenesis (single place of origin) and polycentrism (multiple places of origin).

The first school of thought contends that Bodhidharma took kalaripayat to China, from where the Mandarin adaptation (kung fu) spread to the rest of the world. It may be noted that the name kalaripayat was coined only around the 15th century, and the martial art named kalaripayat was practised in various forms across south India.

So, which of them did Bodhidharma take to China? Even in present-day Kerala, there are three different styles of kalaripayat: the northern, the central and the southern. The southern kalari was influenced by the Marma Adi and Silambam. It is known for its grounded moves, while the northern style is noted for its leaps and jumps. The differences must have been far more pronounced in Bodhidharma’s time.

Kalaripayat is certainly not the oldest form of martial arts in the world. The very first mention of an Indian martial art can be found in the war (Puram) poems of the Sangham literature (6 BCE to CE 3) and this could have been a precursor of kalari. Homer in 6 BCE documented with illustrations the fighting art of his time. Plato mentioned a shadow boxing art called skiamachia. It could be an offshoot of pankration, which is probably the oldest documented fighting discipline. It was a sporting event at the Olympics in 648 BCE. Pankration’s philosophy was to turn the entire body into a weapon, whereas kalaripayat helps turn your body into all eyes. Different wordings, same result.

Unlike kalaripayat, kung fu has not shied away from accommodating changes. Kung fu is more organised and streamlined than kalaripayat. But they share a lot of similarities, including the crouching stances and the smooth flow of movements. Kung fu also has some of the kalari steps like the neetta chuvadu or long stance.But, in thought process, the two martial arts are quite different. For example, one of the attacking postures of kalari is named after the elephant and is called gaja vadivu. The same posture in kung fu is named after the horse.