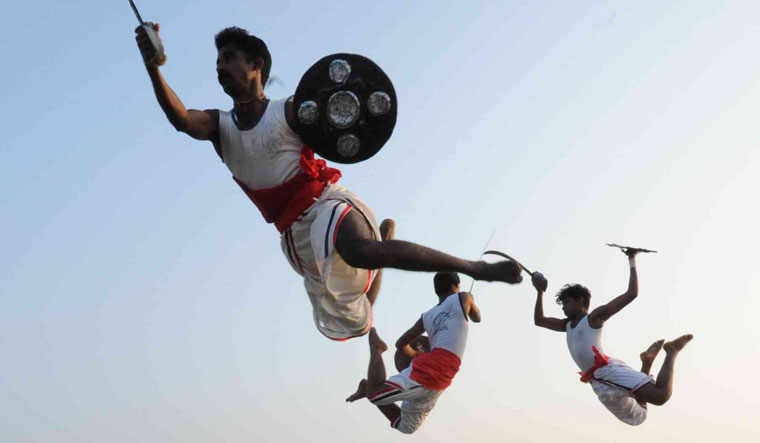 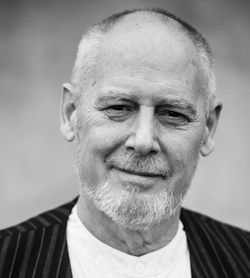 I first travelled to Kerala in 1976-77 when I began training first in kathakali and then in kalaripayat. I was fortunate that Gurukkal Govindankutty Nair accepted me as a student at the C.V.N. Kalari, Thiruvananthapuram. I also trained with C. Mohammed Sherif at the Kerala Kalarippayat Academy (Kannur) and learned some techniques from Raju Asan to familiarise myself with the ‘southern style’.

Between 1976 and 1993, I lived in Kerala for a total of seven years, and was very fortunate to be the first individual from outside Kerala to receive official recognition from the C.V.N. Kalari Sangham as a gurukkal. I continued to practise kalaripayat and teach at my own official kalari—the Tyn-y-parc C.V.N. Kalari—in West Wales, the UK. I use kalaripayat along with yoga and taiqiquan (one of the Chinese martial arts) in training contemporary actors.

Along with my practical training in kalaripayat and kathakali, I have pursued in-depth scholarly research on both these modes of embodied practice in Kerala and their historical and practical relationship.

During my first or second extended period of time in Kerala itself, I have heard people saying that “kalari is the mother of all martial arts”, and that kalaripayat was the martial art practised by Bodhidharma. From all the research I have done, and from the research of scholars on Shaolin temple and Bodhidharma, the assertion that kalaripayat was taken to China by Bodhidharma is historically inaccurate. As I explained long ago in my book, When the Body Becomes All Eyes, kalaripayat as a unique Malayali martial art did not emerge and develop from whatever earlier form(s) of martial arts practised in the earlier periods.

Unfortunately, there is an assumption that ‘older is better’ or that somehow if one finds the ‘mother’ of martial arts, then someone has found the ‘best’ among the martial arts. Martial arts are embodied practices which are shaped by specific historical and sociocultural period and context. Kalaripayat should be appreciated for what it is—a form of bodymind, psychophysical training unique to Kerala that developed from what was practised during the 10-12th centuries just as the Malayalam language and culture emerged and gained their unique forms and identity distinct from Tamilakam.

The extraordinary range, styles and practices which constitute kalaripayat today were shaped locally within various regions of Kerala by specific master practitioners/teachers. Kalaripayat has embedded within it assumptions about the bodymind relationship, embodied practice and the benefits of exercise drawn from both yoga philosophy/practices of yoga and Ayurveda.

Those who wish to claim that Bodhidharma took kalaripayat to China should read the extraordinarily well researched account of the history of the Shaolin monastery, The Shaolin Monastery: History, Religion, and the Chinese Martial Arts, by Meir Shahar. Shahar is a specialist in Chinese history and language and if kalaripayat had been taken to China by Bodhidharma, Shahar would have said so.

Yes, when I observe some kung fu exercises, especially some of its kicks, I feel they are remarkably similar to some of the basic kalaripayat kicks. But this does not mean that kalaripayat per se is the source of such exercises.

The sources and traces of the oldest lineages of martial practice in India can be found in a few chapters of the Agni Purana that deal with Dhanur Veda, in select passages of the Mahabharata and in Tamil Sangam heroic poetry where we gain glimpses of these earlier martial practices. But they cannot and should not be given the name kalaripayat. These earlier/older practices certainly contributed to what we see and identify as kalaripayat today.

It is counterproductive to try to determine whether kung fu or kalaripayat is the ‘best’ martial art. What is important for me about kalaripayat is not whether it is ‘the mother’ of all martial arts, or whether it is ‘better’ than kung fu, but rather what those who immerse themselves in its practice learn about how to direct their attention, open their awareness and come to a better understanding of their own bodyminds than would have been possible if they had never taken up its practice. And of course how/what one learns from any martial art depends upon the expertise and guidance of one’s teacher(s). I was very fortunate to have the generous guidance of Gurukkal Govindankutty Nair. That is sufficient for me. I do not need to claim that kalaripayat is what Bodhidharma took to China, or that it is the source of kung fu. What is important is to savour what one learns from such a rich tradition that is uniquely south Indian.

Zarrilli was a director, writer, actor-trainer, professor of performance practice, and the first person to receive a doctorate in kalaripayat. He wrote this article for THE WEEK a few months before his death on April 28, 2020.