Modi should visit the Shaolin temple 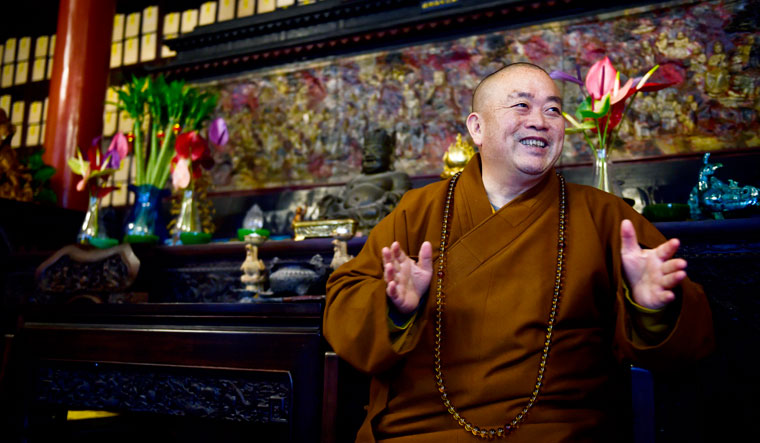 The soft-spoken Shi Yongxin is the 30th abbot of the Shaolin temple. The 55-year-old has been the head of the temple since 1999. Shi Yongxin, who joined the temple in 1981, has overseen its expansion into a global brand. Known as the CEO monk of China, Shi Yongxin is also a member of the National People’s Congress of China, which is the country’s ceremonial legislature.

Excerpts from an exclusive interview with the abbot:

What do you teach young students who come to the temple?

We teach Shaolin kung fu and meditation, which have the physical and spiritual components that will contribute to enlightenment. Young students are told to take care of their body through the teachings of Zen. Over the years, there have been some changes on how monks practise, but we have never lost our traditions.

What needs to be done to promote Shaolin culture and martial arts across the world?

The Shaolin temple has a rich history of 1,500 years. Our culture and traditions are so unique. So many from around the world want to know about the Shaolin culture, and we do all we can to help them. Our culture is a belief culture. It is to help people improve their quality of life and find their enlightenment. Shaolin culture, beliefs and kung fu need to spread to every corner of the world. Though we are monks, we cannot remain isolated and we need to communicate with the world.

How important is India for the Shaolin temple? Is there a plan to set up a temple at Bodhidharma’s birthplace?

India has always been very important to us. There are different perceptions about Bodhidharma in India. I went to India twice. In 1996, I visited important Buddhist centres in the country. They were all well protected and maintained. Not just the Chinese, but people from Japan and Korea also visit India to know more about Bodhidharma. We do not know the exact place of birth of Bodhidharma. It is impossible to find the actual place of birth as there is no evidence to establish the same. We can consider building a Shaolin temple near an important Buddhist centre in India.

Do you believe that Shaolin kung fu was developed from a version of the Indian martial arts that Bodhidharma brought here?

I do not agree with this theory. Shaolin kung fu cannot be related to Bodhidharma alone. China has a long tradition of martial arts and it is different from what you have in India. Shaolin kung fu has evolved over the years.

Important world leaders have visited the Shaolin temple. Do you expect Prime Minister Narendra Modi to pay a visit?

We want to interact with the Indian government on a regular basis to understand more about Bodhidharma and Buddhist practices in India. Your prime minister is very powerful. I have followed his work, and he looks quite knowledgeable about Buddhism and religious teachings. I want him to visit the Shaolin temple and help us grow in India and other places across the world.