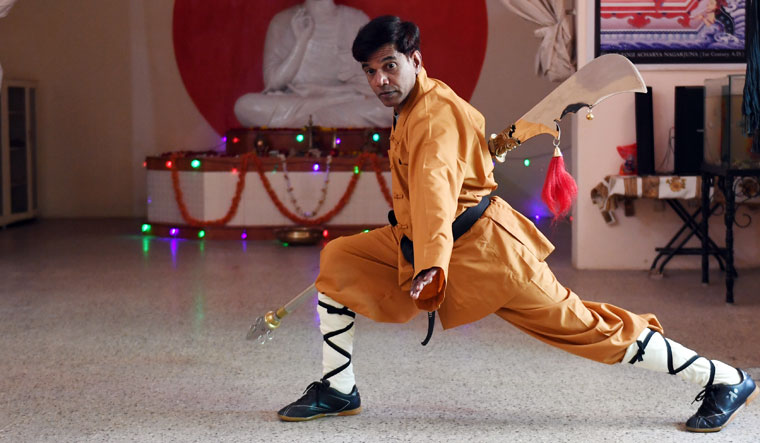 Acharya Raghu, founder of Sailum Martial Arts Academy of India, Bengaluru, went on a 4,000km journey in China in 2017, retracing the footsteps of Bodhidharma. Later he wrote the book Bodhidharma Retold: A journey from Sailum to Shaolin.

Edited excerpts from an interview:

Why do you say that Shaolin kung fu originated from hatha yoga?

We have essentials that are common to the two traditions—right from the pantheon of Vairocana, Vajrapani, Kinnara, Yaksha, Skanda and Narayana, to the primary objective of achieving spiritual Bodhicitta, and the secondary psychic objective of Vajrakaya.

What drove you to research on Bodhidharma?

[I wanted to distinguish] the historical Bodhidharma from the mythical Bodhidharma. Many stories about Bodhidharma tend to undermine his contribution to Chan and Shaolin kung fu. My primary goal was to substantiate that Bodhidharma lived in flesh and blood. I was also keen on exploring the story behind Chan philosophy, martial arts, ancient Buddhist hatha yogic culture, and their psychological and physiological effects. The one common factor that ties together all of this is Bodhidharma.

Further, lately, there appears to be persistent efforts from certain sources to distance Shaolin kung fu from Bodhidharma and India. The people who discredit him seem to have completely neglected the Indian angle.

You say that Bodhidharma reached Shaolin at a very old age, possibly after he was 90. How could he travel at that age to China?

The monastic lifestyle then was vastly different from the lifestyle today and many of monks attained the age of 100 or more.

Although Bodhidharma might have lived past 150, his vital organs probably aged only about one-third of that. Long hours of meditation every day for years could have slowed down ageing. In any case, there is ample historical evidence that monks practised rigorous kung fu well into their nineties.

Where did Bodhidharma go from Shaolin? Was he poisoned as some believe?

Every aspect of his life is shrouded in mystery—even his death. He passed away between CE 534 and CE 536. Legend is that he resurfaced three years later, and was seen carrying a grass sandal. So the king gave orders to exhume his body, and upon digging, all they found was a grass sandal. This sandal was preserved until it was stolen in the eighth century.

Yes, he was poisoned, not once but five times. But he did not die of poisoning.

You have retraced the footsteps of Bodhidharma on a 4,000km trail. What was that experience like?

It was overwhelming. As I travelled from the southernmost part of China to the north, retracing his footsteps, I realised his strong resolve and commitment to Zen Buddhism. I could feel his presence everywhere.

I also felt the respect that the Chinese Zen community accords to Bodhidharma, Indian Buddhism and its culture. All of them had extraordinary commitment in preserving every bit of Bodhidharma—such as the place where he made his first landfall, where he planted his staff, where he dug for springs, where he meditated, washed his bowl, crossed the river on grass reed, etc. These are all beautiful tourist destinations now.

You said the Tamil film on Bodhidharma—7aum Arivu—twisted his life and was completely erroneous.

The film was not a historical work based on credible early records or inscriptions. It was a work of fiction. It wrongly portrayed him as a young man as he arrived in China; however, every record accepts that [he] arrived in his old age.

He undertook a three-year-long voyage to China by the sea, and not riding a horse across the Himalayas as in the film. The film’s depiction of him as a married man with two children is highly objectionable.

Buddhabhadra was also an Indian monk then, and has translated several Buddhist texts from Sanskrit to Chinese. How different was Buddhabhadra from Bodhidharma?

Buddhabhadra, also known as ‘Futuo’, was also a fellow Buddhist monk. He was a Hinayanist monk, and was also known as ‘Vinaya’ or ‘tripitika’ master; he was not a Zen monk like Bodhidharma. It is crucial to realise that there is a world of difference between the two, although both belong to Buddhism.

Buddhabhadra stayed with the Northern wei emperor ‘Xiaowen’ at the capital city of Pingchong. When the emperor shifted his capital city to Luoyang, Buddhabhadra also shifted with him; and this is when Xiaowen got a new monastery constructed for him on Mt. Song, which later came to be known as Shaolin.

Note, again, that Buddhabhadra has nothing to do with either the tradition of Chan or kung fu.

Was there any conflict between Bodhidharma and Buddhabhadra?

The documents, inscriptions and archaeology show that there was a lot of unfortunate political and religious rivalry, slander, destruction of facts, and conspiracies that took place around the Shaolin temple during the epoch period. Chinese scholars like Dr Yang Xiaotian and others confirm the existence of such a rivalry between the Theravada monk Buddhabhadra and the Mahayana monk Bodhidharma.

Early records clearly state that Bodhidharma faced immense resistance from orthodox Buddhist and other native schools. He was first forced to shift from the locales of Mt. Song due to the construction of a monastery for Buddhabhadra (which later came to be known as Shaolin, not at its inception). After this, Bodhidharma and his senior-most disciple Seng-fu shifted to the southern part of China, and he only returned to Shaolin temple after 526 AD.

I think some of the reasons for such rivalry were Bodhidharma’s immense popularity, his revolutionary lifestyle, and the reception of the masses towards the doctrine of Chan (Zen). This seems to have irked the contemporary religious community.

Why was Bodhidharma more popular than other contemporary Buddhist monks? Why is he remembered more?

I think there were many reasons for this popularity.

His unique revolutionary lifestyle seems to have captured the imagination of the masses. He was a wandering mendicant, enduring the ravages of nature, staying in natural shelters like caves, grooves, and cemeteries—he set an example of leading a true sage’s life. While most of the monks were enjoying luxuries offered to them by imperial patronage, and often meddling in politics, Bodhidharma ardently stayed away from the imperial sway, palaces, and officials, and led a simple frugal non-monastic and ascetic life, which definitely appealed to the common folk.

Further, he preached a doctrine that advocated resorting to non-canonical practices, making it accessible to everyone, and not just the select few who could read and write. He spoke of a special transmission outside the scriptures, not dependant on words and letters.

You have said that Sumatra those days was the transit point for Indian and Chinese scholars. Bodhidharma was in Sumatra, and possibly it was here that he learned Mandarin. At the same time you said he did not have to speak any language.

Though he was averse to spoken and written words and advocated a non-canonical culture, Bodhidharma also needed to communicate with the common masses, who according to early documents, followed him like the crowds of a market place. In hindsight, considering he spent more than half a century in China, it was essential for him to know the Chinese language to communicate and transmit his doctrine as well as Kung fu. While some of the critical components of his teachings, especially to his senior-most disciples, were often communicated eloquently in silence, words were necessary when he spoke to the masses.

Why are Buddhist elements in Zen Buddhism and Shaolin kung fu largely unexplained?

According to records, the early phase of Vajrayana (also called the unrevealed phase of Guhyasamaja Tantra) remained under the shroud of secrecy and was transmitted secretly for around 300 years, before it was put into the open by monks from the seventh and eight centuries. It was during such early days (last quarter of 5th century AD), when Vajrayana was in its embryonic state that Bodhidharma lived in and departed from India. He carried such an unrevealed and primitive first phase of Vajrayana to China, which differs vastly from the Tibetan Vajrayana that we see today. This is certainly one of the reasons the similarities have not been drawn by a bulk of the modern scholarship. Further, a lot of the material around early Vajrayana was composed in a cryptic language, one that deliberately misleads the reader. This was done in order to uphold the secrecy. This is another reason why the esoteric elements remained unexplained.

All of east Asian history and tradition accepts Bodhidharma as the founding father or architect of the Zen school of Buddhism. Therefore, it would not be strictly accurate to say that the Indian Buddhist tradition has been overlooked in this regard. However, when it comes to Shaolin kung fu, there have been some recent rumblings to discredit Bodhidharma. Sometimes it seems to me as if there are serious persistent efforts in isolating Bodhidharma and Zen from Shaolin kung fu by certain modern works.