We are closely watching Chinese navy 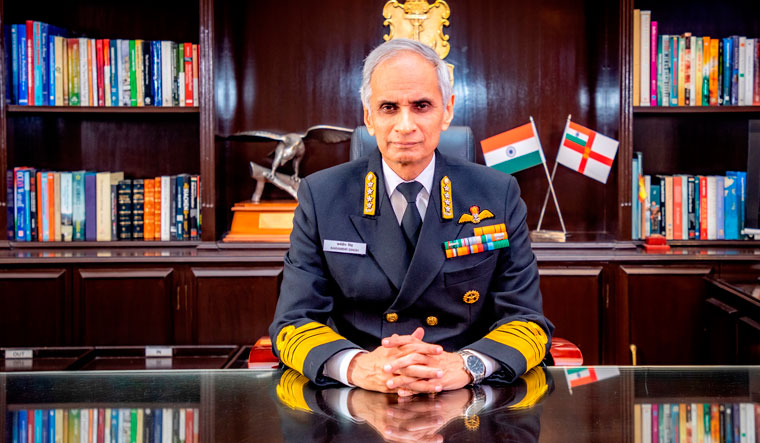 Amid worries that India’s border tensions with China could spill over to the maritime front, Admiral Karambir Singh says the Indian Navy is ready to meet any challenge in the Indian Ocean Region. The admiral also talks about the Navy’s modernisation plans to counter the Chinese. Excerpts from an interview:

The Indian Navy had proposed to upgrade the military facilities in the Andaman and Nicobar Islands and Lakshadweep. How far have we progressed on these?

The Andaman and Nicobar Command has matured as a tri-services command and is built on the edifice of jointmanship. The ANC will also form part of the Maritime Theatre Command. For efficient functioning of the Command, effective synergy is being maintained between the three services. Plans are afoot to strengthen the Command with appropriate maritime assets and augmentation of infrastructure to increase the overall security of Andaman and Nicobar Islands.

What are the new military platforms and other infrastructure capabilities in the ANC?

In addition to the ships available at the ANC, the Indian Navy has already based some weapon-intensive and helicopter-capable ships at the ANC. Older LCUs [landing craft utility] have been replaced with five new and more capable ships. One more ship has been delivered and is awaiting induction, and two more such ships are under construction at Garden Reach Shipbuilders and Engineers Limited. These will also be based at the ANC. In addition, the Indian Navy will further augment the force levels of ships, aircraft, helicopters and unmanned aerial vehicles at the ANC. Regarding the augmentation of infrastructure, construction of additional jetties, technical support, infrastructure and other facilities is in progress. A tri-service, ten-year infrastructure plan for the ANC has been formulated.

The India-China border skirmishes could spill over into the maritime front. How capable is the Indian Navy in taking on the Chinese navy?

All the People’s Liberation Army Navy activities in the Indian Ocean Region are monitored closely. The Indian Navy as a professional force evaluates the maritime security environment in the IOR on a continuous basis. Capability and capacity in the form of force readiness and force planning of the Indian Navy are shaped to meet any challenges in the region.

What are the priorities of the Indian Navy when it comes to modernisation?

The Indian Navy’s modernisation plan for the future includes induction of aircraft carriers, ships, nuclear-powered submarines and conventional submarines, revitalisation of the aviation and sub-surface assets, and the induction of certain state-of-the-art weapons, sensors and equipment. Further, the development of technical and support infrastructure for maintenance of these assets is also being progressed concurrently.

What are the ongoing acquisitions of the Indian Navy?

At present, 43 ships and submarines are under construction, of which 41 are being built in Indian shipyards. The first indigenous aircraft carrier is under construction at Cochin Shipyard, Kochi, with [expected] delivery in the latter half of 2021. Four destroyers of Project 15B are being constructed at Mazagon Dock and delivery is likely to commence from 2021. Seven frigates of Project 17A are under construction at Mazagon Dock and at Garden Reach, and their delivery will commence from 2022. Further, contracts for two diving support vessels, four survey vessels (large) and four Project 1135.6 follow-on ships were concluded in 2018. A contract for 16 ASW shallow-water craft was concluded in 2019. Besides 43 under-construction warships, ‘acceptance of necessity’ has also been accorded for 38 ships and six Project 75 (India) submarines. 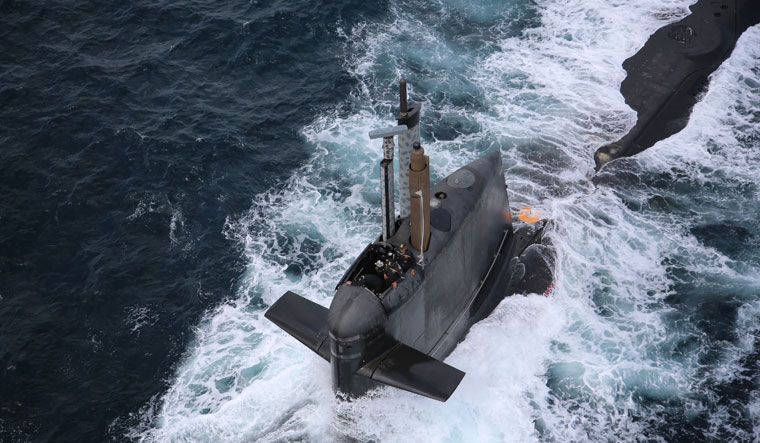 Riding the wave: the INS Kalvari, a scorpene-class submarine, during sea-trial off Mumbai | AFP

How is the Indian Navy enhancing its maritime surveillance in the area of interest?

The P-8I long-range maritime reconnaissance aircraft is a potent platform and has proven itself on multiple occasions. The delivery of four additional P8I is scheduled by 2021. The Indian Navy has also contracted Hindustan Aeronautics Ltd to deliver 36 aircraft comprising 12 Dorniers (six delivered), 16 advanced light helicopters and eight Chetaks. Further, ‘acceptance of necessity’ has been accorded for the procurement of naval utility helicopters under the strategic partnership model. We are also looking to procure additional P8I aircraft and high-altitude long-endurance remotely-piloted aircraft to augment our surveillance capabilities. The Navy has just got two MQ 9B Predator drones on lease from the US and efforts are on to acquire 30 armed drones (10 each for the Air Force, the Navy and the Army) from the US through the foreign military sales route.

Compared with China, our submarine strength is very low.

Any update on the third aircraft carrier requirement?

A third aircraft carrier is in the cards. The Navy is all about reach, and we are clear of the utility of the carrier.

What are the efforts to give permanent commission to women officers?

The Indian Navy has been considering granting permanent commission for women officers, commissioned after December 3, 2008, at par with male officers, in specific branches/cadres/specialisations, viz education, law, naval constructor and naval armament inspectorate. The Navy is in the process of considering permanent commission for short service commission officers (both men and women) in certain additional branches/cadres/specialisations, in accordance with the Supreme Court judgment of March 17. Restrictions due to the Covid-19 pandemic have impacted the timelines of implementation.