Warships on the west coast

Unlike rulers who built ships predominantly to trade, Shivaji built them to fight

The English frigate was aptly called the Revenge. In September 1679, armed and with six files of soldiers, it joined three others that were blockading the island of Kandheri, just off the coast of Mumbai, to intimidate the Marathas. Shivaji, the greatest Maratha commander, had ordered the fortification of the island. The British orders were clear: they could use force to stop the construction.

For the next five months, the blockade continued. Despite being outnumbered and outmatched, the Marathas managed to outmanoeuvre the combined forces of the English and the Siddis, their nemesis. Then, the English withdrew, and a peace accord was hastily signed. Shivaji had exerted his might.

“The English navy was superior to the Maratha warships in every respect,” writes B.K. Apte in his seminal work A History of the Maratha Navy and Merchantships. The advantage was tactical. “The slimly built Maratha ships were no match for a single massively built English frigate, with big and long-range guns. The Marathas, knowing full well their inferiority in the navy, never encountered the English battleships on the open sea.”

The Kandheri incident is now just a footnote in history. But it lies at the heart of the success of the Maratha navy. It was not the best equipped, but it was skilled enough to trouble better navies. The secret was that the Maratha ships operated close to the coast and escaped into narrow creeks with lightning speed. “The shallowness of the sea, the soundings near Khanderi and the nature of the coast were peculiarly suited to the movements of lightly built Maratha boats,” writes Apte.

If the Cholas had their conquests on the sea, Shivaji was the first ruler in India to realise the potential of the navy. Unlike most other empires, Shivaji’s navy was not only for trade—its brief was political, rather than economic. 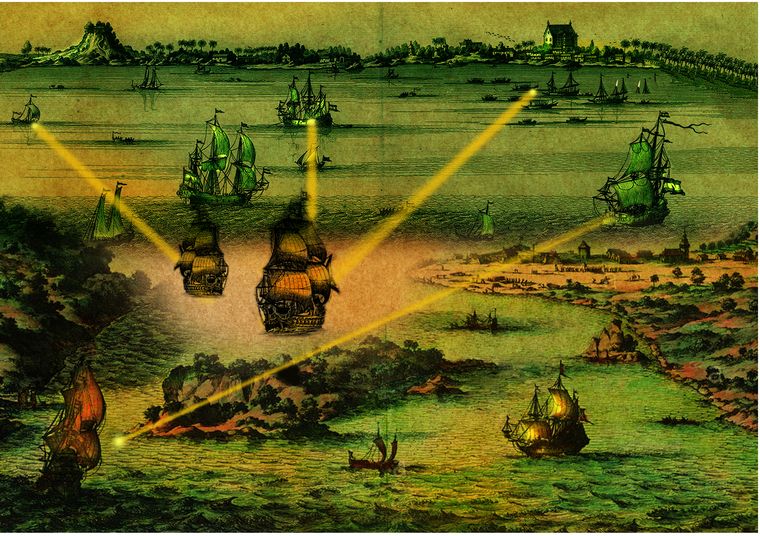 “The navy has been considered as an independent limb of the Maratha State by [Shivaji’s finance minister Ramachandra Pant] Amatya in Rajniti, a work on Maratha polity,” writes Apte. The objective was superiority. He realised the necessity of controlling the seas to gain territory on land. “When Shivaji began his career of independence, the coast of Konkan was infested with alien powers,” writes Apte.

There were the Portuguese, who controlled the Arabian Sea, the English and the Siddis, who were a dangerous enemy. Shivaji’s naval ambitions started in 1665 with the loot of Basrur, located in Udipi district of Karnataka. He attacked Basrur with 85 ships big and small, and brought home immense booty. No naval engagement took place in this raid. But it was the turning point.

Shivaji’s ambitious naval plan made even the Portuguese jittery. A letter written by the viceroy of Goa to the king of Portugal on August 6, 1659, reveals that he has asked the Portuguese captain to “smother” the movement of the “newly built gallivats” at Kalyan, Bhiwandi and Panvel. Kalyan was one of Shivaji’s first conquests in 1657 and where he floated his first ship.

During his time, the Maratha Navy had around 20 warships. While he had two able commanders, Mainak Bhandari and Dulat Khan, his sailors were Konkanis who had saltwater in their veins. After Shivaji, his son Sambhaji continued the tradition, acquiring Elephanta Caves, building forts, hiring Arab commander Jange Khan to train his men and expanding the navy. But the true successor to Shivaji’s vision was Kanhoji Angre.

Appointed sarkhel or admiral of the Maratha fleet in 1699, Angre has the rare distinction of never losing a naval battle. “In 1710, the sarkhel was in control of the entire west coast from Mandwa to Goa,” writes Ruby Maloni in her paper The Angres And the English—Contenders for Power on the West Coast of India in the Indian History Congress Vol 66. “The British historian of the Marathas, Grant Duff ranks the Angre navy first and the English navy second, in this period,” she writes.

In the first year Angre took over, he defeated the Portuguese, the English and the Siddis, and annexed Sagargarh, near Alibaug. He made Vijaydurg his capital in 1720 and his maritime empire continued to grow. His enemies continued to attack for three years.

At its peak in 1729, Angre’s fleet had nearly 100 ships. They were commanded by Kolis, but he held forth and insisted on collecting Chauth—25 per cent tax on revenue. If they did not pay, he seized the ships. He was so feared that the East India Company had to spend 50,000 pounds a year to maintain an armed squadron to protect their trade. “He really is considered the father of the Indian navy,” says Vasant Shinde, director general of the National Maritime Museum.

Angre finished the fortification that Shivaji set out to do in 1679 at Kandheri Island. This 16-acre island today is known by his name. And his statue—in the heart of the naval dockyards—looks out at the sea that he once refused to let the English dominate.