The Qutb Shahis of Golconda made India synonymous with diamonds 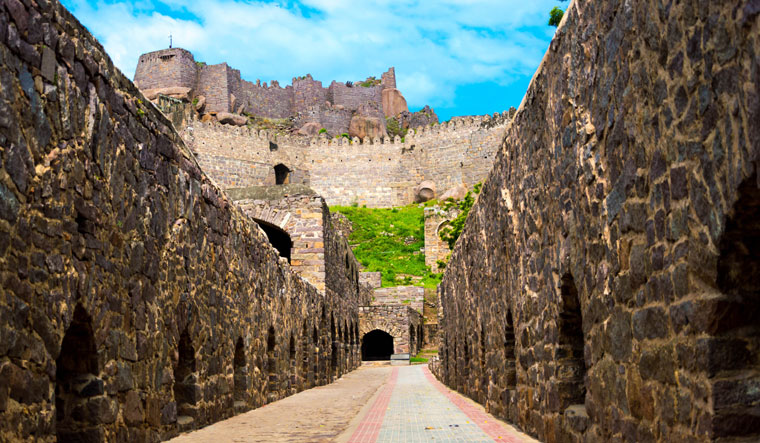 Citadel of riches: The Golconda Fort in Hyderabad

Un beau violet (a beautiful violet), that is how Jean-Baptiste Tavernier, the famed French traveller and jeweller of the 17th century, describes the colour of the 115.16-carat Golconda diamond he bought from India. Sketched in his chronicle, The Six Voyages (1678), the legendary Hope Diamond was produced from this large stone which came to be known as the Tavernier Blue. In 1678, it was acquired by the king of France, Louis XIV, along with 14 others, for a steal—just over 400kg of gold. Cut smaller, it yielded the French Blue, which became King Louis’s necktie. This diamond was stolen during the French Revolution, acquired a curse, underwent recutting (with the largest section acquiring the name the Hope) and finally ended up in the US. This stone—now in the Smithsonian Museum, Washington, D.C.—is a tangible, but often missed, link to India’s sea-dominated history, courtesy the Qutb Shahis of Golconda.

In the mid-19th century, Golconda was the shorthand for a rich mine. The origin of this rather fabulous word dates back to the time of the Qutb Shahi Sultanate that ruled over parts of present-day Andhra Pradesh, Telangana and Tamil Nadu from 1512 to 1687.

The Qutb Shahis were great patrons of art. The fifth ruler of the dynasty, Muhammad Quli Qutb Shah, wrote sensuous poetry—about dark-skinned women, the monsoon and even the sheer khurma. They adopted Telugu, created a garden city—Hyderabad—and even translated a sex manual. They also made India synonymous with diamonds.

“The Golconda Fort was a secure place for trading these diamonds,” says Serish Nanisetti, a history-obsessed journalist who wrote Hyderabad: The Rise and Fall of a Global Metropolis in Medieval India. Security, privacy and an opening to the sea made Golconda famous for its diamond trade. “The diamonds were mined near Kolluru [presently in Guntur district of Andhra Pradesh], which is miles away from Hyderabad,” he says. “The only way that they could traverse across the world was through the sea—except [in the case of] the Koh-i-Noor.”

Under the Kondaveedu Fort (in present-day Guntur district), around 30,000 miners sifted sand for diamonds, according to Nanisetti’s book. The traders could keep diamonds under one carat, but everything bigger belonged to the king. It is from here that some of the world’s most famous diamonds—the Koh-i-Noor, the Daria-i-Nur, the Hope, the Orloff and the Great Table—were mined.

The Golconda diamonds began their voyage to other shores from Machilipatnam port. “The kingdom’s prosperity can be linked to the sea,” says Nanisetti. “When Charminar was built, one of the arches opened towards the Machilipatnam port.” Each mile to the port was marked with a kos minar (milestone).

Under the Qutb Shahis, foreign trade flourished in Machilipatnam. Being part of the spice route, the port was a stopover for those from the east coast going to Mecca. “We have statistics to prove how much trade was done. At one point, 80 per cent of the trade in Lisbon port was from Golconda,” says Nanisetti. The Dutch East India Company docked in Machilipatnam first and this changed the fortunes of this tiny country. They also opened their slave trade in India from here. 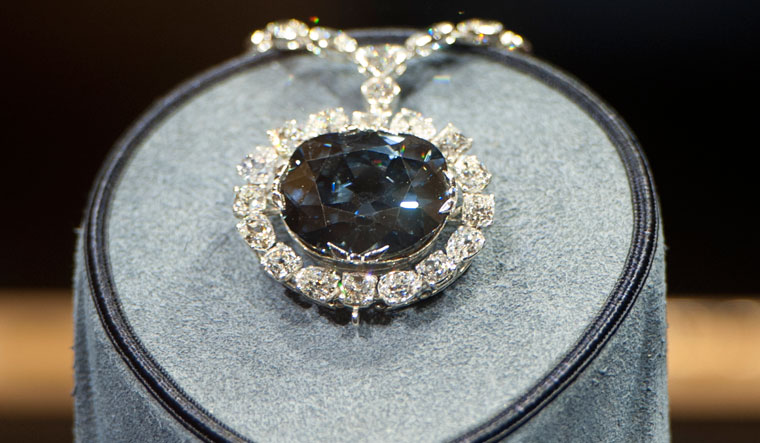 Fabled glow: The Hope Diamond at the Smithsonian Museum in the US | Getty Images

The story of the Qutb Shahi kingdom also begins with a sea voyage. The founder of the dynasty, Quli Qutb-ul-Mulk, came to India via sea from Hormuz in Iran, with his uncle Allah Quli and a horse. His journey was propelled by a prophecy. He was 10 when he stepped off a boat in Chaul port (currently in Maharashtra)—escaping from Persia where his tribe was being wiped out. According to Nanisetti, he had met a spiritual man in Yazd, Iran, who told him that his future lies in Hindustan.

The year was 1480, and the Bahmani sultanate, the first independent Muslim state of Deccan, was powerful. The young Quli made a 10-day trip to Bidar to present his horses to the Bahmani king. “In the night, when the young king entertained or travelled through the town, the world changed into an Arabian Nights fantasy,” writes Nanisetti. It is in this enchanting world—a mosaic of merchants and abuzz with life—that Quli made his mark as a strong man. He stamped out highway crime and fought off a pirate. Quli was soon made a tarafdar (governor) by the Sultan. Once the Bahmani kingdom disintegrated, he declared independence and founded the rule of Qutb Shahis from Golconda.

The sea and trade brought a new culture to the land. The word for sweet lime on the east coast is mosambi, since it came from the Portuguese colony, Mozambique. “In Hyderabad, you find pineapples on mosques for embellishment,” says Nanisetti. “It was [also] part of Portuguese [influence].” Pineapples also adorn the tomb of the fourth ruler of the kingdom, Ibrahim Quli Qutb Shah.

The sea and trade brought skirmishes, too. In 1622, the Qutb Shahis conquered Santhome in Mylapore (in modern-day Chennai) from the Portuguese. In 1670, Reza Quli, a eunuch commander, blockaded the English in Fort St George for a month for more custom duty.

The symbols from the sea formed part of Qutb Shahis’ hedonistic life. Their pleasure boats that sailed the Hussain Sagar lake of Hyderabad were modelled on the ones they saw in Machilipatnam. The sea was never far away.