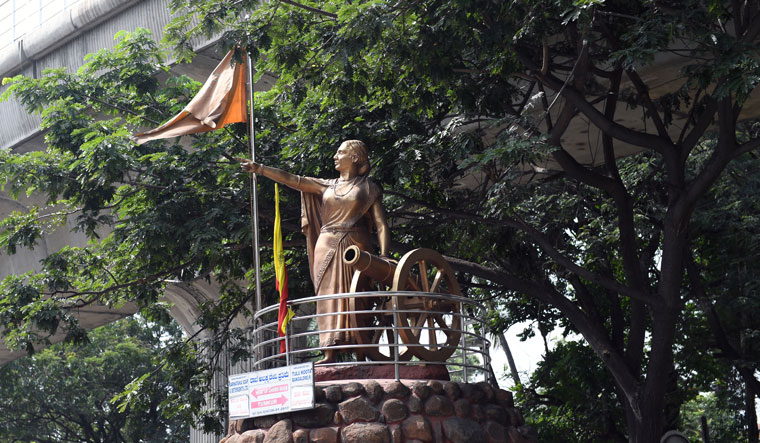 History and her story: The Rani Abbakka statue in Bengaluru | Bhanu Prakash Chandra

Cast in bronze and pointing into the distance, Rani Abbakka Chowta stands beside her trusty cannon at a busy traffic junction in Bengaluru. Her story is part history, part folklore and the perfect script for a swashbuckler. Yet, the tales of Rani Abbakka—considered the first female freedom fighter; she had nearly three centuries on India’s favourite warrior queen, Lakshmi Bai of Jhansi—remain largely untold.

The princess of the Chowta kingdom, a Jain dynasty that ruled over coastal Karnataka between the 12th and 18th centuries, Abbakka was trained to rule by her uncle Tirumala Raya. She could ride a horse, fight with a sword and was a seasoned diplomat. She also had bloody battles with the Portuguese and, according to legend, was the last person to use agnivanas or arrows tipped with fire. Her fort in Ullal, now romantically ruinous, still stands a reminder of her bravery. Paintings depict her unleashing cannon fire on the Portuguese from these beachy bastions.

Like Oliver Twist, the first Europeans in Mangalore wanted more. But they were not as polite as the little orphan. They wanted to keep control over trade in the Indian Ocean by using sailing permits. In true colonial style, what the Portuguese could not achieve through bullying, they did through strength. “The port town (Mangalore) suffered the most at the hands of the Portuguese,” writes historian B.S. Shastry in Studies in Indo-Portuguese History. “Not only was its freedom of trade hindered, but it was attacked and damaged several times.”

During one such raid in 1558, the Portuguese had discovered that Muslim ships from Cannanore were docked in Mangalore. They tried to capture the ships, but were repulsed by the locals. Enraged, the Portuguese slashed to death women and men, and then set fire to the town.

Friction with the Portuguese was inevitable. Ullal was strategically important as a port as it had a thriving spice trade.

What complicated matters further was that Rani Abbakka’s husband, Lakshmappa Arasa of Mangalore, apparently started cooperating with the Portuguese after they promised to help him conquer more land. Abbakka left her husband, who was the king of the neighbouring region, and went back home. Divorced, fierce and over 40, she could be the poster girl of modern feminism.

Her first battle with the Portuguese was in 1555, when Admiral Dom Álvaro da Silveira and his platoon arrived with expansionist designs. She defeated them. Several bitter, bloody battles followed till the queen was finally captured.

In 1568, Portuguese Viceroy Antony D’ Noronha dispatched Joao Peixoto with a fleet of soldiers. He managed to capture Ullal and enter the palace. Abbakka, however, fled and took shelter in a mosque. In the dead of night, she, along with 500 of her soldiers, killed Peixoto and 70 troops.

“The invaders were forced to flee to their ships in disgrace,” writes Kailash Mishra, a research fellow with the Indira Gandhi National Centre for the Arts, in his paper on Rani Abbakka. Mishra is also working on a documentary on her life.

Emboldened, Abbakka, along with 500 of her supporters, including Muslim soldiers, attacked the Portuguese, killed Admiral Mascarenhas and captured the Mangalore fort.

“Though Abbakka was a Jain by faith, her administration was well represented by Hindus and Muslims,” writes Mishra. “Her army, too, consisted of people from all sects and castes, including the Mogaveeras, a fisher-folk community.” Her ability to wield a sword aside, Abbakka was also a ruler who lived the spirit of amalgamation.

It was a blow the Portuguese were unwilling to accept. Further attacks followed and, in 1569, the Portuguese regained Mangalore and captured Kundapur.

Realising that she needed help to fight the Portuguese, Abbakka formed an alliance with the Zamorin of Calicut and the Sultan of Bijapur in 1570. The Portuguese, however, chose to use treachery to defeat her. According to local legend, they conspired with her estranged husband and launched a surprise predawn attack when she was returning from the temple. Caught off guard, she nevertheless leapt into battle and led from the front. And though she was captured, legend says she fought till her last breath.