The English first encountered a rocket in India courtesy Tipu Sultan. His missiles, tubes filled with gunpowder, had a 2km range; two are displayed at the Royal Artillery Museum in Woolwich, England.

The Mysore ruler was fascinated by innovation, and even had a mechanical tiger that roared. His ships had copper bottoms and were rust- and worm-proof. Tipu, like his father Hyder Ali, recognised the importance of a strong navy.

Tipu’s navy had 20 battleships with 72 cannons each and 20 frigates of 62 cannons each. He established a separate board of admiralty in September 1786; there were dockyards at Jamalabad, Wajidabad and Majidabad and he had commissioned 40 ships. His navy is believed to have been 10,000 strong; the French were his consultants.

He sent his diplomats to France via Constantinople in 1788. Though the restoration of the alliance did not happen (the French had made peace with British and did not want to alienate them by allying with Tipu), the arrival of the ambassadors was covered breathlessly by French newspapers. Future US president Thomas Jefferson, who was the US ambassador to France at the time, reported the event with great interest.

Tipu was following his father’s example. Hyder Ali knew that a navy would help boost trade and defend the coast. “Contemporary Portuguese records point to the fact by 1763, Haider Ali had risen to sufficient eminence,” writes Shivappa G. in The Proceedings of the Indian History Congress Vol 63. Ali Raja, the Moplah king of Arakkal in Kerala, was his admiral and, in 1764, they conquered the Maldives. 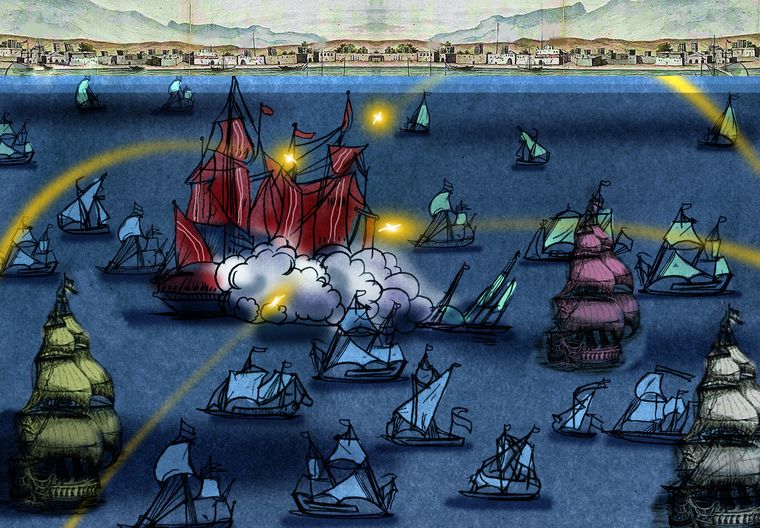 Hyder was Trump-like with his admirals and fired them often. Raja, who was instrumental in the conquest of the Maldives, was dismissed because he had blinded the Maldives sultan. Hyder is believed to have been outraged by this act of barbarity. Raja was replaced by an English mercenary, but not for long. Hyder dismissed him, too, soon after the First Anglo-Mysore War, to appoint a cavalry officer Luft Ali Beg as admiral. The appointment did not sit well with Hyder’s European crew and, in 1768, his fleet—all ten ships—mutinied and joined the English forces.

His lack of patience with his crew notwithstanding, Hyder’s ships made the colonisers envious. Especially the British. A visiting writer to Onore, Karnataka, observed: “Here there are two frigates building near the castle; one of thirty-two guns, the other of twenty-four guns…We went on board both of them, and were surprised to find them so well performed.”

Hyder also brought in a Dutchman called Joze Azelars to help strengthen his fleet. A 1778 letter by Jose Pedo da Camera—a Portuguese man clearly spying on the progress of this plan—claims that Hyder was building several warships, a great naval arsenal and dockyard at Bhatkal. He also ordered “construction of many sailing ships in all the places in the south coast… He had hitherto in the sea or in the stocks eight three-masted ships which carry 28 to 34 pieces of artillery and similar number of ‘palas’ (a kind of ship) also in the sea or in stocks of lesser tonnage.” The Dutchman did not last long either; he faced “greater opposition from the Brahmin who assist him”, said a letter by another inquisitive Portuguese traveller.

Tipu, however, was a little more tempered when it came to his admirals and he did what his father did not have the vision to do—invest in forts. When he died, the British discovered the extent of his vision. In Canara, Karnataka, they found three ships with their masts and anchors.