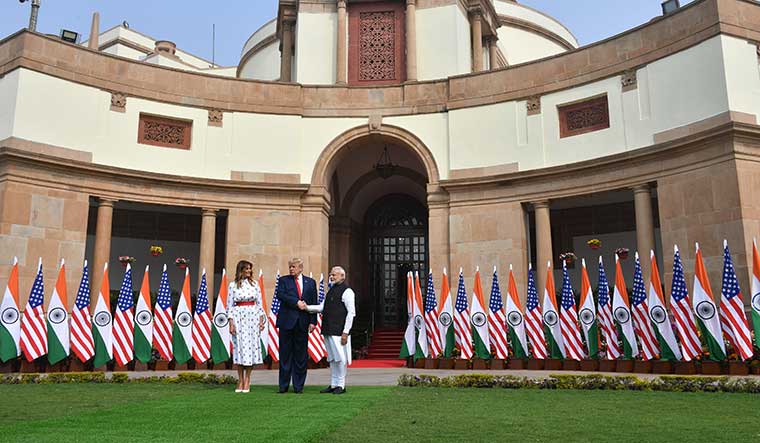 Stronger together: Prime Minister Narendra Modi with US President Donald Trump and his wife, Melania, at Hyderabad House in Delhi in February | Arvind Jain

IRRESPECTIVE OF WHAT happens in the presidential elections on November 3, India can be assured of continuing courtship from the United States. Although President Donald Trump and his Democratic challenger Joe Biden are engaged in a bitter battle, they both agree on the importance of ties with India.

India has shown that its relationship with the US is special for both countries. The ice was broken with the visit of president Bill Clinton in 2000. President George W. Bush came to India and offered the civilian nuclear deal. Barack Obama came twice—first in 2010 and then in 2015 as chief guest of the Republic Day celebrations. Even Trump, known to be a reluctant traveller, made a standalone visit along with his family.

The fundamentals of the relationship are strong. Bilateral trade has grown from $60 billion in 2013 to $90 billion in 2019. The 2+2 dialogue has been institutionalised. Secretary of State Mike Pompeo and Defence Secretary Mark T. Esper will come to Delhi on October 27 for talks with External Affairs Minister S. Jaishankar and Defence Minister Rajnath Singh. It is unusual to have such a summit so close to the presidential elections and it shows the level of bipartisan support India enjoys in Washington, DC. Defence ties, too, have improved, especially with the signing of three foundational agreements (the last of these agreements could be signed during the 2+2 dialogue), growing arms sales and with the US decision to rename its Pacific Command as Indo-Pacific Command.

India will be keen to see how the new administration deals with China. The Trump camp suggests that Biden will be soft on China. “You think the Chinese gave (Biden's son) Hunter Biden $1.5 billion because he was a great businessman, or because they knew the Bidens could be bought, and therefore be soft on China,” said Trump’s son Donald Trump Jr at a recent campaign event.

But Biden has a long history of friendship with India. “My dream is that in 2020, the two closest nations in the world will be India and the United States,” Biden had said back in 2006, when he was a ranking member of the senate foreign relations committee. He worked with committee chairman Richard Lugar to get the India-US nuclear deal approved by the senate.

Biden and his running mate Kamala Harris released a video on August 15 to commemorate the Indian independence day in which he promised to “confront the threats [India] faces in its own region and along its border”. It has come at a time India is facing threats on its eastern and western borders. The Trump administration, too, has promised India support, especially in dealing with China. “We are doing it in the security area. We are doing it in terms of outsized demands to claim sovereign territory, whether it is in the Galwan valley of India on the India-China border or in the south Pacific," said Deputy Secretary of State Stephen Biegun.

Michael Kugelman, deputy director of the Asia Program at Wilson Center, Washington, DC, said India might prefer Biden to Trump if it had to make a choice. “Biden is a more conventional and predictable leader and India would prefer to have a less mercurial and more low-maintenance figure running the show in Washington.’’

Rajesh Rajagopalan, who teaches international politics at Delhi’s Jawaharlal Nehru University, agreed with Kugelman’s observation. “Trump has shown distrust for alliances and partnerships,’’ he said. “We need to build partnerships and the Biden administration will do a better job.’’

A stable hand in the White House is very crucial for India, more so in the context of the emerging Sino-US cold war, which could shape the contours of the global security architecture. “We will be looking at how the new administration deals with China,’’ said Sanjay Pulipaka, senior fellow at the Delhi Policy Group. “At the moment, the department of state, the department of defence and even the US trade representative see China as a possible threat.’’

While Biden is yet to reveal his China policy, he could make some overtures in an attempt to tone down hostilities. But his steadfastness might work better in the long run. “Trump has steadied the policy despite his unpredictability,’’ said Rajagopalan. India will be counting on the US to build and strengthen multilateral partnerships like the quad to counter China.

The Indo-US partnership will, however, face its own set of challenges. The Trump-Modi bromance weathered the trade tariff storm, but the Democrats could prove to be difficult on the issue of human rights. Kashmir, the treatment of minorities and Amnesty International’s departure from India could become prickly issues.

India has made it clear that criticism is not welcome. Last year, Jaishankar cancelled a meeting with top leaders of the house foreign affairs committee after they insisted on the presence of Congresswoman Pramila Jayapal, who sponsored a resolution which was critical of India.

Jaishankar also rebuffed Senator Lindsay Graham, a close confidant of Trump, after he suggested at this year’s Munich Security Conference that the best way to sell democracy was to settle the Kashmir issue democratically. "Do not worry senator,” Jaishankar told Graham. “One democracy will settle it and you know which one.”

Kugelman said though Democrats made more noise about India's domestic policies compared with the Republicans, most of that came from their Congressional caucus. “If Biden became president, the criticism would be subdued. Democrats and Republicans alike see India as a key strategic partner in helping pursue Washington's top foreign policy goal—balancing Chinese power in the Indo-Pacific,” he said. “But it does not mean that a Democratic administration will not be critical of India.”

There is also worry whether Biden will be a hands-on president, considering that he is 77. “Or will there be a tussle between the progressives who want to change the world and the moderates? India will have to wait and watch,’’ said Harsh Pant, director of the strategic studies programme at Observer Research Foundation, New Delhi.

Yet, there is no immediate cause for concern. A strong bipartisan consensus on the importance of India will propel bilateral ties forward regardless of who wins on November 3. “One of the constants in US-India relations has been that every presidential administration has left the relationship in even better shape than the one it inherited,” said Biegun on October 20. “Oftentimes we can see international relations move with the political shifts in the United States, but India has been a constant…. It leaves me confident that this relationship is much bigger than any one political party.”