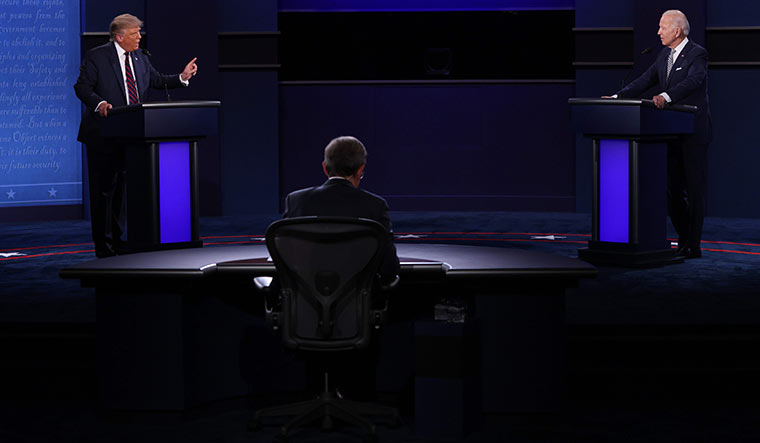 Political parties were not envisioned by America’s founding fathers, so it is of great significance that we may soon be witnessing the collapse of America’s storied two-party system. The Republican party seems to have sold its soul to Donald Trump who has remade it into a reflection of his own dysfunctional self. The Democratic party has been meandering in the desert, seeking to find a home in the hearts of those who despise Trump.

The party that loses the presidential election is certain to be shocked into nonexistence, if not utter irrelevance. Trump has already reduced the Republican party into a cog in his political machine, keeping it in line with the mere threat of a nasty tweet to his 87 million followers. He has used it to ram through controversial environmental, educational and labour policies and judicial appointments like the recent nomination of Judge Amy Coney Barrett to the supreme court. Back in 2016, Republican senators blocked president Barack Obama’s supreme court nominee months before the presidential election. Now they march in lockstep with Trump to violate their own decrees, with a Trumpian disregard for promises and propriety and will confirm Barrett right before the election, perhaps hoping to boost their standing with the fanatics in the party and save the president and themselves in the elections.

But they may have miscalculated the backlash from the public, evident from the long lines at early voting stations. Influencing the voters’ decision further is Trump’s denial of the Covid-19 pandemic and the president’s obstinance which does not permit him to accept his own mistakes. It has created a governmental dystopia that has all but paralysed the most powerful nation on earth.

America is experiencing a political atmosphere which stokes fear and anxiety among its people. Both Republicans and Democrats hope that it will lead to wholesale changes and usher in an era of new politics. It could also lead to the demise of one of the political parties. There are precedents in the nation’s history. After its loss in the 1800 presidential elections, the Federalist party faded into irrelevance. Similarly, the Whig party, which gave the country four presidents in the 19th century, collapsed after the 1852 presidential polls.

If the Democrats lose the presidential elections and fail to gain a majority in the senate, they are likely to remain mere spectators in a Trump show of unabashed triumphalism. If Trump loses and the Republicans lose control of the senate and fail to win back the house of representatives, the party will have no one to blame but Trump. But they should also blame themselves because without their enabling, Trump could not have happened.

Americans rarely split their votes and it spells trouble for down-ballot Republicans if the nationwide backlash against Trump becomes a landslide. That is not hard to imagine in a country presided over by a party, which, according to former Republican congressman David Jolly of Florida, has become “an association of largely white populists with an angry anti-government grievance agenda”.

But there is still support for the agenda and Trump seems perfectly capable of firing up his base. “I support law and order, hard work and respect for the American flag, our national anthem, the military, human life, NASA and our founding fathers. I also support protecting our borders from drugs, the killing of terrorists and putting America first,” says Jordan Vaughn of Belle Union, Indiana.

Should Trump manage to eke out a win and his party loses the senate and the house, he will find that the lack of accountability that has characterised his first term is a thing of the past. The Russian investigation and the impeachment failed not on account of lack of substance, but because Republicans chose loyalty to Trump over everything else.

There is only one senate race, in Louisiana, where the Republicans are likely to pick up a seat. Republican senators in Arizona, Colorado, Maine, Montana, North Carolina, Iowa, Georgia, South Carolina and Michigan are in danger of losing to Democratic contenders.

Democrats need to flip only three seats to retake the senate, or four if Trump is re-elected and Vice President Mike Pence can break a tie. And, they are quite likely to keep the house of representatives. With opinion polls giving Biden a double-digit edge over Trump, calmer days are perhaps here again.