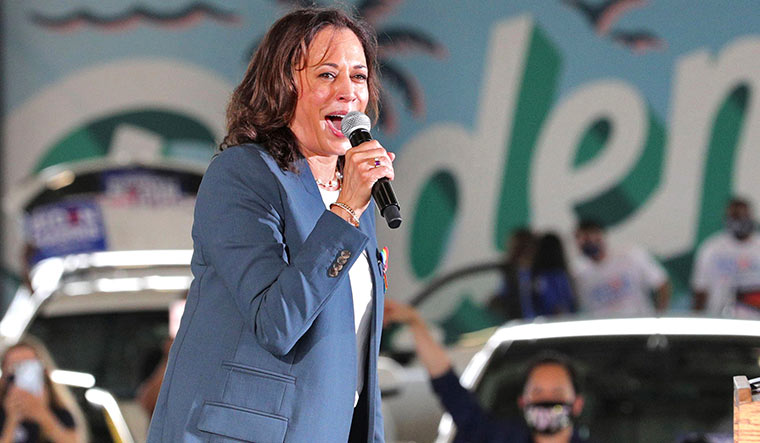 Loud and clear: Kamala Harris at an early-voting event at the Central Florida Fairgrounds in Orlando | AP

WITH LESS THAN two weeks left for one of the most chaotic presidential elections in American history, the Indian American community with 1.4 million registered voters seems to be reiterating its traditional preference for the Democratic party. Despite isolated pockets of support for President Donald Trump, especially on account of his friendship with Prime Minister Narendra Modi, most Indian Americans are likely to vote for Joe Biden and his running mate Kamala Harris.

According to the 2020 Asian American Voter Survey, as many as 65 per cent of Indian Americans are inclined to vote for Biden, while 28 per cent favour Trump. Karthick Ramakrishnan, founder of AAPI Data, a platform that publishes demographic data and policy research, says Asian Americans are the fastest growing racial group in the United States, and Indian Americans are the fastest growing community within the group. They are likely to have a significant impact on electoral races in many competitive states and congressional districts. “We have had a record high turnout in 2018 and we are most likely going to see that continuing,” says Ramakrishnan.

Seema Nanda, who had served as CEO of the Democratic National Committee, says the Indian American turnout has almost doubled from the midterm elections in 2014 to the midterms in 2018. “That is a staggering statistic to really see the awakening of the Indian American community. It can really be attributed to the results of the 2016 [presidential] elections. People woke up and saw what happened when they did not vote.”

Nanda has observed a massive surge in political awareness and activism among the Indian American community, which has doubled in strength since 2000. “One of the most fascinating things I saw in leading the Democratic party was that there were so many grassroots groups of Indian Americans, with a lot of women doing the work on the ground. They did not do any of this before 2016. So Trump’s election was a mobilising moment for the Indian American community that is going to really play out in 2020.” 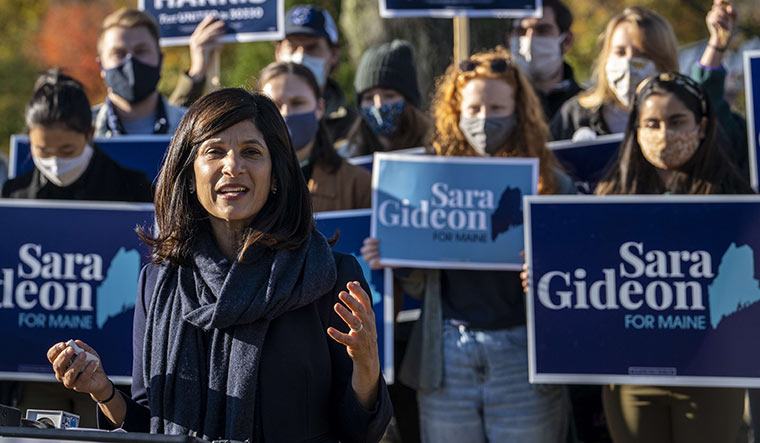 Indian Americans have influence beyond their numbers and with their brain power and financial muscle, they are a force to reckon with. As Neil Makhija, executive director of the advocacy group IMPACT (Indian American Impact Fund), says, “The reason we are here was to fill a specific role for industry because of the immigration policy. But we are coming of age as a community and we are finally getting to a position where we are seeing people up and down the ballot, people who are entering public life.”

In fact, the second generation Indian Americans are particularly active in civic life and more than 70 of them are in the fray in the current election season. These include Sara Gideon who is the Democratic nominee for senate from Maine, and Sri Preston Kulkarni and Hiral Tipirneni, Democratic nominees in the race for the house of representatives from Texas and Arizona, respectively. Democratic members Ami Bera, Raja Krishnamoorthi, Ro Khanna and Pramila Jayapal are seeking reelection to the house of representatives. In 2012, Bera was the only Indian American in the Congress. By 2016, there was a five-fold jump in the numbers as he was joined by Krishnamoorthi, Khanna and Jayapal in the house and Kamala in the senate. “Our community did not increase its population by five times in those four years. What happened was that we increased our engagement,” says Makhija. 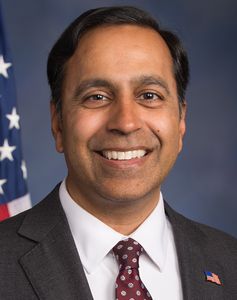 Krishnamoorthi calls the Indian presence on the Capitol the samosa caucus. “We need more pakoras, more idlis and more vadas. We need everybody in the Congress so that it looks like America. You can run for local office, city council, state house, state senate and, of course, the US Congress, though please, not in my district,” he jokes.

Maya Harris, who took to the internet to tell voters how her sister Kamala always stood up for her, says the south Asian community has a decisive role to play in this election. “We literally have the potential to be the margin of victory in several key swing states to propel Kamala and Joe into office,” she says. In 2016, the Democrats lost Michigan by just 10,000 votes and Pennsylvania by 40,000 votes. “There are more than 44,000 south Asian voters in Michigan and more than 60,000 south Asian voters in Pennsylvania who could easily close that gap.”

Biden has recognised the importance of attracting diverse groups and has assembled under the Democratic tent a vast coalition ranging from seniors to millennials, from Hindu Americans to Muslim Americans and from college students to restaurant workers. There are scores of Indian American groups that have come together to support him. Besides AAPI (Asian Americans and Pacific Islanders) there are several other players like the Indian American Impact Fund, South Asians for Biden, the Indian National Council for Biden and Indiaspora. There are also grassroots groups like Sikh Americans for Biden, which coordinate advocacy efforts, phone banking and digital outreach in battleground states.

Kamala’s presence on the ticket has attracted a large number of Indian Americans, although a section of them feels that she is not Indian enough. Krishnamoorthi says her presence is a huge plus. “You see it in all kinds of metrics. Whether it is fundraising or engagement, it is palpable. Her addition to the ticket has made a big difference. You see pictures of her family and you see your own family in those pictures. It is really quite striking.” 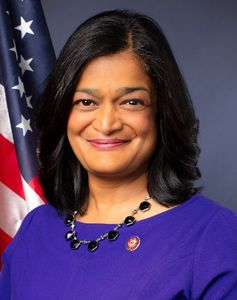 The excitement for change is bringing a tidal wave of funds and support. IMPACT raised $11 million in just three months and Makhija says the excitement about this year’s elections among Indian American voters is unparalleled. “With an Indian American on the presidential ticket for the first time in history and a record number of Indian American candidates running for office, our voters are poised to exert considerable influence.”

Niraj Antani, who was only 24 when he was elected to the Ohio house of representatives on a Republican ticket, says Trump’s outreach efforts are bearing fruit. “The president’s trip to India and sharing the stage with Prime Minister Modi and his neutrality on issues like the Citizenship (Amendment) Act and the abrogation of Article 370, compared with Biden's opposition to those issues, have polarised the community and that is why you are seeing what the data shows,” says Antani. The Trump campaign has made a lot of efforts to reach out to Indian Americans, including the Howdy, Modi! event. Antani agrees that Indian American support for Trump is not going to shoot up from 28 per cent to 70 per cent in the near future. He says it is all about creating a coalition. “So if it goes up from 28 per cent to 38 per cent, it could well be part of a coalition to win a state.”

Krishnamoorthi, who is a member of the house intelligence committee, says Biden played a key role in shepherding the India-US India nuclear deal through the US Congress. As chairman of the senate foreign relations committee, he worked hard to ensure the deal’s smooth passage on the Capitol Hill. Taking note of the warm ties between former president Barack Obama and Modi, Krishnamoorthi says India-US ties will always be driven by bipartisan consensus. “The relationship is taking on new importance, especially with regard to our views on national security vis-à-vis China in the Indo-Pacific region. And for that reason, our national security is bound up with the security of India. I think that Joe Biden and future presidents will grow closer to India and that is a natural progression.” 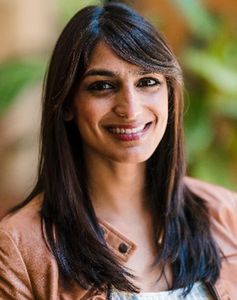 Nisha Biswal, president of the US-India Business Council, agrees. “The US-India relationship is the defining partnership of the 21st century,” says Biswal, who served the Obama administration as assistant secretary of state for south and central Asia. “I think Joe Biden and Kamala Harris will certainly put India among the very top of their priorities as they look to strengthen America's standing in the world.”

Biden is also likely to address concerns regarding H-1B visas and green cards, which have been targeted repeatedly by the Trump administration. Sabrina Singh, who is Kamala’s press secretary, says Biden will reform the existing H-1B visa system to ensure that it is not used to hold down wages in the United States. “Biden will then support expanding the number of visas and eliminating country-limits on employment-based green cards.”

The unpredictability of this year’s voting process is keeping the Indian American community on its toes. A large number of young men and women are involved in grassroots efforts, especially in the battleground states. Their efforts got a boost on October 14, when south Asian celebrities came together for a virtual block party in support of the Biden-Harris ticket. The event attracted more than 1,300 participants and included famous names such as former federal prosecutor Preet Bharara and actors Aasif Mandvi, Mindy Kaling, Kumail Nanjiani and Madhur and Sakina Jaffrey.

Outreach remains the key to success for Democrats, says Nanda. “We lost in 2016 by just 70,000 votes, across three states— Wisconsin, Michigan and Pennsylvania. So every single vote is going to matter. There is an overrepresentation of Indian Americans in these battleground states. But it is a vote that can never be taken for granted.”