Biden, with his reservoir of empathy, is what America needs right now 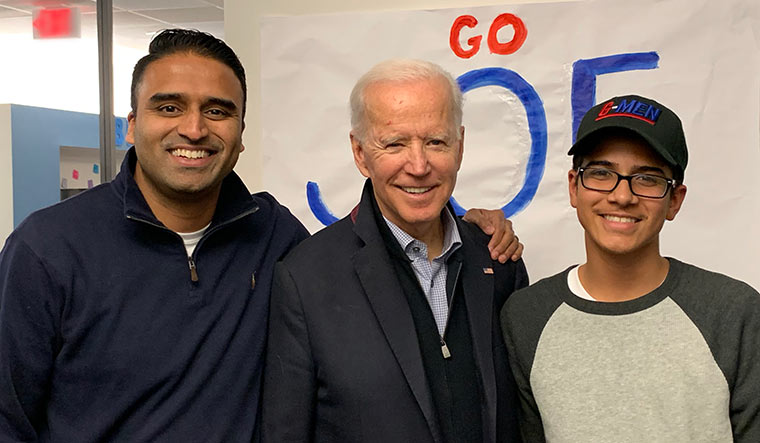 Close ties: Maju Varghese and his son with Joe Biden.

Q/ You have been with Joe Biden from day one of his presidential bid.

A/ We had a very talented and crowded primary field. Those were tough days in February 2020 when we took on Iowa, New Hampshire and Alabama. We were a much smaller team and had a lot less resources. I was really impressed with the vice president’s resilience, and also how we dealt with the pandemic. That was an education, and something I had never done before. They say that you get measured by the company you keep and the people you work with. I have spent the better part of the last few years with Barack Obama and Joe Biden and I am proud of that. My biggest takeaway about Biden is having a president with his experience, his knowledge and also his empathy. [He knows] the feeling of personal loss, having unfortunately gone through it in his life too many times. You cannot underestimate what that means to those who are hurting right now, with so many lives lost to the Covid-19 pandemic. It is very important to have someone with that kind of reservoir of empathy now.

Q/ For Indian Americans, how important is the choice of Senator Kamala Harris as your vice presidential candidate?

A/ It is incredibly important. After we got the news, I got emails and phone calls from families who aren’t necessarily political. They felt heard and seen in a way that maybe they hadn’t felt before. That photo of Senator Harris with her mom in a sari, that was all of our moms. I think it is going to mean a lot for the Indian American experience in this country, another symbol of how far we have come. Our children don’t have to become doctors and engineers to serve at the highest levels of government. It can be a vital part of our democracy and can contribute to society in so many ways. I think you are going to see another generation of Indian American leaders in politics and government as a result of that.

Q/ There is a significant presence of Indian Americans in the Biden team. Will it have an impact on his approach to India and to immigrants from India?

A/ I think the diversity of the staff is something that we are proud of because it reflects the diversity of the country. It will have an influence on the administration because this campaign feels very much like America, with people from all walks of life. First generation Americans are people whose parents have immigrated in the last 30 to 40 years. I think it is personal to us. It is not abstract, we have lived it. I am confident that if we are fortunate enough to win, we will have an administration that feels the same way. I think people across the country will know that their story is somehow represented in that White House and in that administration.

Q/ How did the immigrant experience influence your career and worldview?

A/ I have been fortunate enough to do the work I have done and go to places I could only have dreamt of, such as a couple of trips to India for President Obama, the last of which was on Republic Day in 2015, walking into the presidential palace in Delhi or showing up at the Republic Day parade with the president of the United States. In Washington, my parents, my sister and my aunts and uncles would visit the White House and I would show them the Rose Garden and I would think how far we have come in one generation and that this was all because of their hard work.

The immigrant experience has made me very protective of all immigrants, their journey and their story. I feel incredibly protective of their legacy. I know that I am a very important link in the chain because I saw their struggle first-hand. It is very important for all of us who did not actually live that struggle to continue to tell their story, not just to our children but to our colleagues and our friends, and make sure that that story lives on and those values live on.

Q/ You once tweeted about how Parkinson’s disease affected your dad. How important is Obamacare for America’s future and what are Biden’s plans to protect it?

A/ It is extremely personal to me. My dad was ravaged by Parkinson’s disease, and in the last few months of his life, he couldn’t even stand up on his own. We were lucky because my father had the required insurance coverage, but there are so many who do not. It is incredibly important that we uphold the Affordable Care Act and build on it and maintain those protections. I think there is a generation of us who grew up here with an education and experience and we need to stand up and fight for those things.