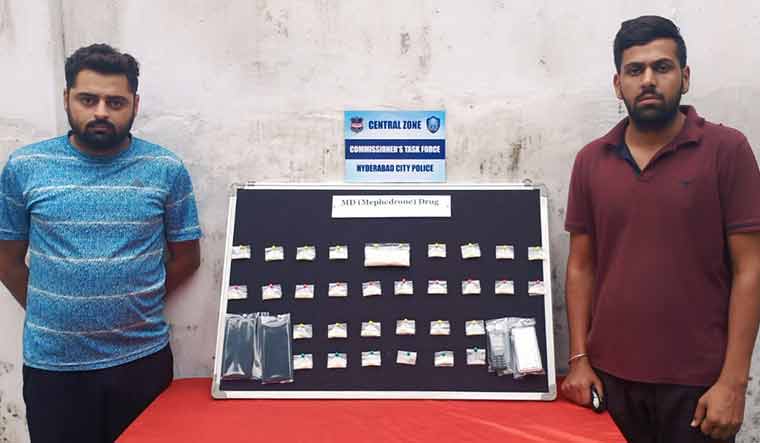 Caught in action: Peddlers who were arrested for transporting banned psychotropic substances and cannabis in Hyderabad.

It was a tip-off that helped the Directorate of Revenue Intelligence (DRI) sniff out Venkat Reddy from a factory he had rented in a pharmaceutical cluster in Hyderabad. Reddy had been arrested twice earlier for illegally manufacturing ephedrine, a compound used to make meth. In August, the DRI raided the factory and caught Reddy ‘cooking’ mephedrone, a banned synthetic drug that goes by the street name ‘meow-meow’. The DRI also raided multiple locations in the industrial hub and seized around 220kg of mephedrone, also known as poor man’s coke. Meow-meow has a very small market in Hyderabad; most buyers are reportedly in Mumbai and Delhi. Officials, therefore, believe that the produce was for export. “This is only the tip of the iceberg,” said a police official.

If one goes by the past cases probed by the excise department, the DRI and the police, it seems that Hyderabad is a transit point for and manufacturing hub of narcotic and psychotropic drugs. Weed, too, finds its way to Hyderabad through the cannabis corridor of neighbouring Andhra Pradesh’s East Godavari and Visakhapatnam districts.

“There are four regions where cannabis is cultivated on a large scale—the northeast, Kerala, Uttarakhand and Himachal and the Andhra belt. Right now, Andhra tops the list for production,” said a top cop from Andhra Pradesh.

According to intelligence officials, modified vehicles are used to ship weed into Hyderabad and its surrounding areas through the cannabis corridor. Modifications range from engineering hacks to secret compartments in the vehicle, the tyres or even the fuel tanks. Currently, the market value of weed grown in this corridor is Rs25,000 per kg. Every year, an estimated 100 tonnes of weed is seized by officials in Telangana.

“We think what we seize is only 3 per cent of the produce,” said an official of the police task force in Telangana. Only a fraction of the load that reaches Hyderabad is distributed by local peddlers. The major share is split, bagged and carried to big markets—Mumbai, Pune, Bengaluru, Gujarat—and other states, either by human couriers or heavy vehicles.

Interestingly, Hyderabad’s supply of psychotropic substances and synthetic drugs like LSD, MDMA or ecstasy, crystal meth and cocaine come from Mumbai, Goa or from abroad. In the last few years, these substances made up for majority of drugs seized from users and peddlers, some of them Africans. 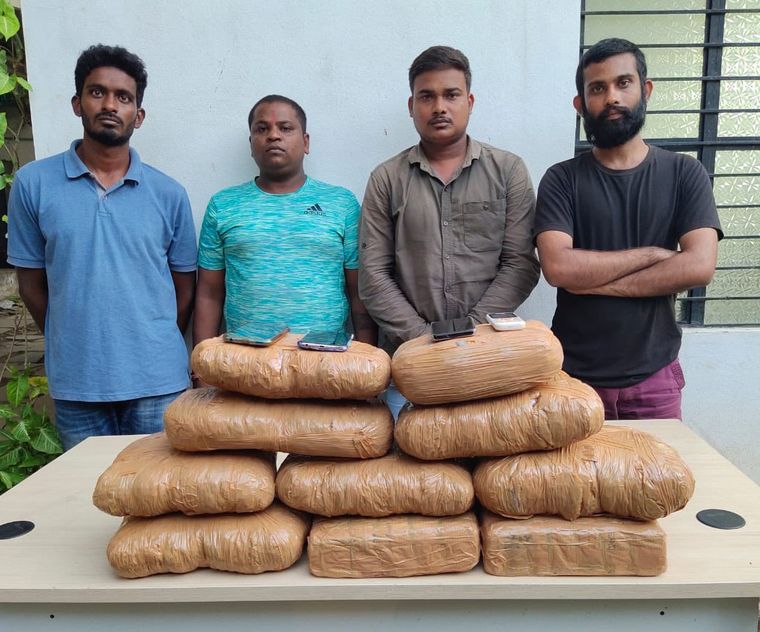 “An engineering student from a small town in Telangana ordered MDMA on the dark web,” said an officer. “He got the drugs concealed in a book from the US. We were surprised to know that the culture has penetrated deep into the interiors, too.”

But there is a bigger problem brewing in the backyard for enforcement agencies. Hyderabad is home to a large number of pharmaceutical factories that specialise in bulk manufacturing. In the last few years, the Narcotics Control Bureau, DRI and the police have rounded up and seized units that were manufacturing precursor chemicals for narcotic substances as well as new-age drugs. Mephedrone is only one such example.

Ephedrine is a compound used in prescription drugs to treat breathing issues and blood pressure. It is also procured as a raw material by various pharma companies to manufacture large-scale drugs. Ephedrine can also be used to manufacture methamphetamine, which is then sold as crystal meth or speed, a synthetic drug. In the last few years, hundreds of kilos of ephedrine have been seized from various factories that were trying to use it illegally. 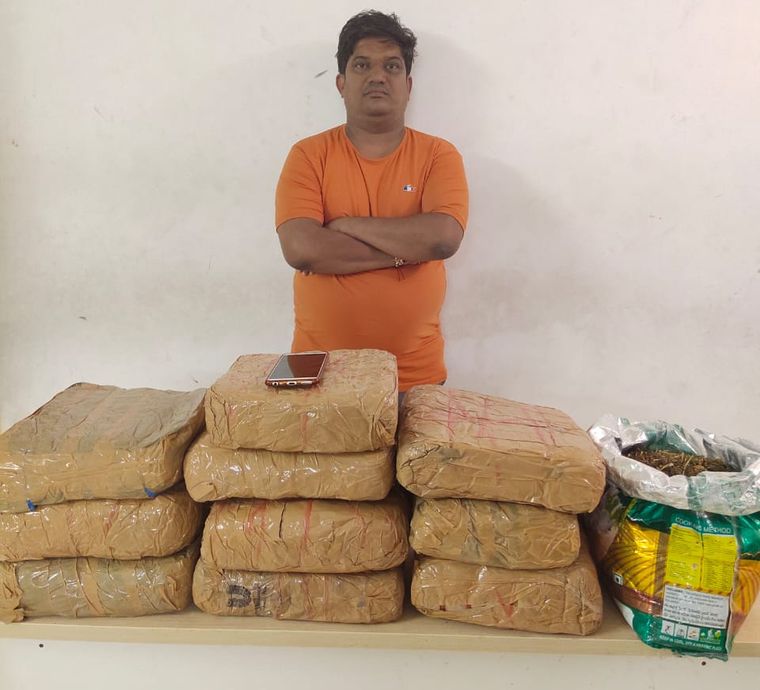 “Out of the total quantity of ephedrine they buy for manufacturing legal medicines, a greedy manufacturer may mark five per cent as spoilt,” said a government official. “This will either be used to manufacture drugs or be exported as it is. Ephedrine is in high demand in Indonesia, where it is banned. We found that it is being exported to Indonesia from India in cooking utensils. We suspect that it is being sent out to western countries in different ways.”

Ketamine, used as tranquillisers or pain killers, is also known as a ‘date rape drug’. Though its domestic use is limited, it is in high demand overseas where it is used in combination with other semi-synthetic drugs. Even Ketamine was found in recent seizures in Hyderabad.

The officials suspect that these drugs are concealed in artefacts, books and utensils and couriered to the US, the UK, a few Asian and African countries. Reportedly, one popular destination is Democratic Republic of the Congo. It is also believed that they are being smuggled out of the country in cargo ships.

Officials seem to be worried that some unethical pharma unit managers and brilliant chemists who have gone rogue might be cooking up substances under the radar in Hyderabad. Intelligence officials dealing with narcotics said that there might be five to six such operators in the city specialising in manufacturing drugs and procuring precursor chemicals.

“We are closely monitoring closed pharma units,” said Cyberabad Police Commissioner V.C. Sajjannar. “We are taking swift action whenever we notice any suspicious activity. We have task force teams and special operating teams continuously looking for (weed) and other banned substances. Our force is also on alert on highways and bypass roads so as to seize vehicles transporting narcotic drugs.”