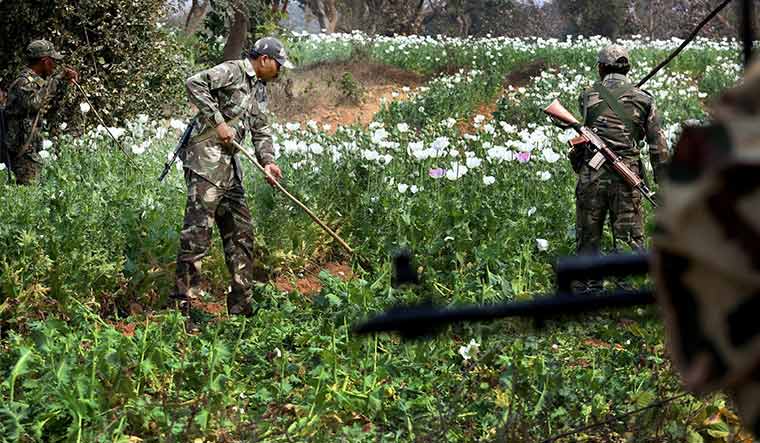 In April, drug law enforcement agencies made a presentation before Union Home Minister Amit Shah. The picture was worrisome. A minimum of 360 tonnes of retail quality heroin is being consumed in the country every year, the international value of which is about Rs 1,44,000 crore. There are an estimated 20 lakh “dependent” users of heroin in the country. The survey conducted by researchers and doctors of National Drug Dependence Treatment Centre at the All India Institute of Medical Sciences in 2019 helped the Narcotics Control Bureau (NCB) understand the consumption and impact of drugs and psychotropic substances on the Indian population.

The NCB arrested Bollywood actor Rhea Chakraborty on September 8 in a drug-related case and she is said to have mentioned some names. But drug law enforcement officers said the actor or her celeb friends may not reveal much. Those accused might not be aware of the entire drug syndicate. That there could be a bigger syndicate in the state with supply links on foreign land, will be a matter of investigation.

However, the newly begun slew of investigations gives officials hope to bust larger drug networks in the country. “We have exposed some of the links in Bollywood in the latest case but the drug problem in Mumbai is part of a larger malaise. We are focusing on catching the big players,” said an investigator.

“The names of these celebrities [given by Chakraborty to the NCB] cannot be disclosed at this point during the investigation,” said the official. “However, legal action will be initiated against them soon.” But the drugs seized so far in this case are only drops in the ocean.

“Last year, we generated a lot of awareness in state agencies and other law enforcement agencies about the drug menace,” Rakesh Asthana, NCB director general, told THE WEEK. “As a result, a lot of seizures have taken place and coordinated efforts are being made to control the problem.”

While India was earlier receiving drugs from international syndicates, today its pharmaceutical and chemical industry—one of the biggest in the world—is also being tapped by international drug cartels for procurement of “precursor” chemicals and for producing synthetic drugs like methamphetamine, popularly known as Yaba tablets, cocaine and a dozen other curated drugs. “The drug cartels in Maharashtra, Kerala, Karnataka, Delhi and Punjab are actively involved,” said K.P.S. Malhotra, deputy director, NCB.

Cocaine is emerging as the future drug in India. “It is costly but much sought-after because the high it gives is different from other drugs,” said a drug law enforcement official. India does not grow coca plant, so the cocaine comes from Colombia and other South American countries.

Fresh inputs with drug law enforcement agencies, accessed by THE WEEK, revealed that the Colombian drug cartels want to bring the paste from the coca plant to labs set up in India, where it can be treated with potassium permanganate to make cocaine. India is one of the biggest manufacturers of the chemical compound.

The pharma industry in the country, too, is contributing to the drug menace, where painkillers like Tramadol and Premadol are abused. Moreover, large amounts of plant-based drugs like cannabis are grown in Odisha, Bihar, Jharkhand and northeastern states. “They are mostly grown in areas prone to left-wing extremism, insurgency or terrorism,” said a drug law enforcement officer in Jharkhand.

There are various networks in south India that are very active like the traditionally ganja-producing areas of Kerala which are now being tapped by heroin and cocaine drug cartels. The biggest threat is being posed by the Kasargod module. “The Qatar authorities are working closely with Indian drug law enforcement agencies to bust this network where the drug trafficking organisations are using human carriers from Indian airports for trafficking of drugs to Doha,” said Malhotra.

A total of 14 cases are being probed by the NCB as part of the Qatar network. The probe revealed that the suppliers were communicating directly with kingpins lodged in Qatar’s central jail. The carriers were usually persons looking for jobs in the Gulf, who were lured by travel agents and sub-agents.

Emerging trends show that sea routes are more active than land routes. Pakistan-based drug smugglers are pushing heroin in India through the sea route. India is also working with the Myanmar police to bust drug syndicates which allegedly have deep links in China. According to latest intelligence reports, Myanmar provinces of Kachin and Shan bordering China have a huge drug industry, indirectly supported by the Chinese.

Another challenge for the drug law enforcement officers is to break the demand and supply chain. “It is easy to probe cases once the traffickers are caught and drugs are recovered. But the real challenge comes when the drugs cannot be located,” said an investigator.

In 2019, about 55kg of cocaine and 200kg of methamphetamine were caught in Australia. The Australian Federal Police revealed that the cocaine had come from India. The Indian agencies found that a group from Delhi, Punjab and Uttarakhand was involved. The NCB registered a case, conducted raids and seized 20kg of cocaine. The investigators found that the 55kg of cocaine was actually part of a consignment of 300kg that had landed in Mumbai by sea in a container. The remaining cocaine is still missing.