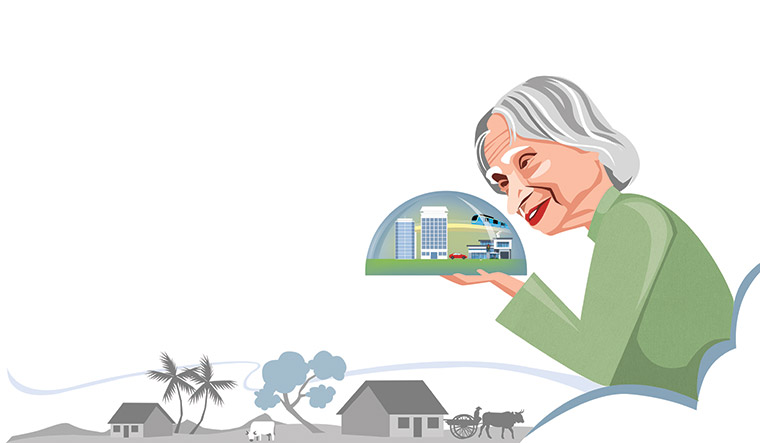 THE ECONOMIC development of any country is based on certain key attributes such as industrialisation, investment in human resources, research capabilities and urbanisation. India, as it continues to be the growth driver of the global economy, is undergoing similar changes. As per Census 2011, 31 per cent of India’s population was urban and cities contributed 52.6 per cent to the GDP (2011-12). The unofficial estimates peg higher shares of population and economic activity in urban areas.

Urban housing poses a unique challenge of simultaneous surplus and deficit. While there is existing housing stock, there also exists unattended demand that needs to be met. The government of India launched an ambitious scheme of housing for all by 2022, both for rural and urban areas. In urban areas, the demand was pegged at 1.2 crore, out of which more than 90 lakh houses have already been sanctioned. We must realise that the problem of urban housing goes beyond a brick-and-mortar approach since access is not equivalent to ownership. The rental housing market needs to be unleashed to match demand and supply. Stringent rent control, unclear property rights and lack of contract enforcement have constrained this market. The government is working with stakeholders to bring in a new tenancy law, with a fast-track court mechanism to handle eviction disputes. As soon as these laws come in, the vast stock of vacant housing will move into the rental market and provide avenues for rental management companies that can professionally manage and rent out properties on behalf of the owners.

On urban mobility, we must start with the understanding that the congestion should not outweigh the agglomeration in Indian cities. Since 1980, India’s transport demand has grown eight times and the number of registered motor vehicles has gone up from 5.4 million in 1981 to 230 million in 2016. This had a positive impact on connecting people, firms and academic institutions. But our inability to provide commensurate infrastructure has led to increasing pollution and traffic congestion. To meet this demand, AMRUT (Atal Mission for Rejuvenation and Urban Transformation), Smart Cities Mission, and integrated mobility solutions (including Metro Rail Policy 2017) are focusing on creating public transport, intelligent transport solutions, metro rail connectivity and non-motorised transport. We are already seeing gains from such actions. For instance, we now have 666km of operational metro lines in the country and an additional 852km are under construction. India is also emerging as a market for electric vehicles and has a vibrant shared mobility ecosystem. Going ahead, the stakeholders need to reach a consensus on charging of appropriate parking fees and application of congestion fee. The focus on transit-oriented development has begun to take root in many cities, but it is yet to become a mainstay of urban mobility.

The attraction of cities is highly dependent on their cleanliness and sustainability. In Indian cities, this has emerged as a key issue. India generates 1.48 lakh tonnes of waste per day and only about 58 per cent is processed. The Swachh Bharat Mission (Urban) has made tremendous gains in building sanitation infrastructure and ensuring door-to-door waste collection and segregation at source. Together, they have become a mainstay of municipal waste management after 2014. However, we need city-level initiatives to enhance the momentum on segregating, collecting, transporting and treating waste. The case of Indore, which has been ranked first consecutively under the Swachh Bharat Mission (SBM) survey, offers great hope. The city segregates and transports 100 per cent of its waste. It uses part of the waste for waste-to-energy plants, while the rest is recycled in various forms. The large 100-acre dumpsite in Devguradiya in Indore is now reclaimed and will be used to create a golfcourse. The city is now moving towards the zero-waste model. We need to replicate the success of Indore across all Indian cities.

Faecal sludge management in areas with limited or no sewer network has also received much needed momentum in the past few years and dedicated faecal sludge treatment plants have also been set up in several cities. It has further enabled implementation of circular economy and contributed to pollution containment.

The last major issue under urban infrastructure pertains to dealing with water stress, as around 820 million people live in high water stress situation. Moreover, waste water treatment was as low as 30 per cent in 2015, even though 90 per cent of the population had access to basic drinking water. The government has prioritised water conservation, waste water recycling and reuse and water harvesting structures using schemes such as AMRUT. The government has also undertaken governance reforms to deal with this issue. It launched Jal Shakti Abhiyan under a new Jal Shakti Ministry. At NITI Aayog, the Composite Water Management Index has nudged states and worked with them to improve water management by measuring and monitoring the initiatives of state governments. If the success of SBM is any indication, we hope that the Jal Shakti Abhiyan will turn around the situation in the water sector. Water conservation, waste water recycling and reuse and appropriate pricing of fresh water would be critical to deal with the water issue in India.

We have also begun to leverage technology to create productivity gains in a more efficient and sustainable manner. The Smart Cities Mission, launched in 100 cities, works through retrofitting, redevelopment and green field development. The mission contributes Rs2.05 lakh crore worth of infrastructure in 5,151 identified projects towards satisfying the anticipated need of $4.5 trillion (about Rs320 lakh crore) worth of infrastructure investment by 2040. This would increase the quality of life and infrastructure in the selected area of the city and act as a beacon for the rest of the city and other cities. Cities need to put in place a digital transformation roadmap across both hard infrastructure and software applications for full integration of the data being collected to support informed planning and decision making.

To encourage urban infrastructure to grow and urban India to contribute meaningfully to the growth of India, it needs to be appreciated that more and more peripheral areas would come under the urban fold. Therefore, proper planning, zoning and development of these peripheral areas is required. Development of satellite towns having the desired economic activity within the city along with connectivity to the other areas is crucial to reduce pressure on the major metros.

Clearly, we are cognisant of the structural challenges when it comes to creating quality urban infrastructure. However, it is pertinent to note that cities and states will have to take a lead in this matter, because of our decentralised governance structure. Apart from sectoral issues, we also need to tackle cross-sectoral issues such as attracting private sector capital and efficiencies, setting up a structured public private partnership framework, and strengthening municipal governance and finances. These, coupled with improved land laws and land pooling, streamlined building and planning norms, and increased ease of doing business will holistically address the issue of urban infrastructure. At this juncture, urban infrastructure offers a win-win proposition for the private sector, cities and state governments and citizens.

—Kant is CEO of NITI Aayog.