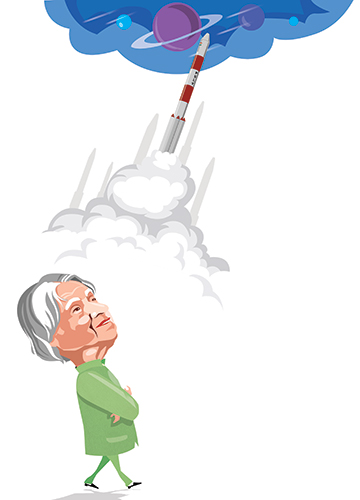 IT HAS BEEN more than 60 years since the first satellite—Sputnik—was launched by the Soviet Union. There has been tremendous growth in space science and technology, and this growth has been having a significant impact on life. It has also fuelled great expectations for the future. Even developments in theoretical physics lead us to ponder what is going to happen in the future.

Will space be a place for peaceful settlement by human beings? Or a place for tourism? Will mankind find another planet outside our solar system to settle down in? Or will the human race set up factories on the moon and mars and mine exotic materials and minerals which would generate energy? Will asteroids impact our planet and take away a slice of the earth? Will space be a theatre of war? All these or many of these can happen in the years to come. What we need to do today is to use technology for more scientific discoveries, and try to protect space and the earth from further damage while deriving maximum benefits.

The Indian space programme was started in 1962 by Vikram Sarabhai, on his realisation that space was an enabler for sustainable development, and would provide materials and technologies that would lead to better living conditions. He believed that India will be second to none in using advanced technology for peaceful purposes and to solve the real problems of common man and society.

Gradually, our scientists mastered launch vehicle and satellite technologies, developed the systems for launching space vehicles, and for operating complex spacecraft systems. The twin areas we focused on were resource-mapping and telecommunication. I would say, the growth of the Indian Space Research Organisation in terms of its capabilities and development of technologies was phenomenal, given that funds were hard to come by.

Within the first few years, ISRO emerged as the most successful research and development organisation in India which was not only developing and mastering frontier technologies but also providing technological support for the benefit of the common man. Founded on the well laid out plans of Prof Satish Dhawan and Prof U.R. Rao, ISRO introduced tele-education, connected rural hospitals with city-based superspeciality hospitals through telemedicine, linked village resource centres for disseminating data to resource centres of state governments, and systems for weather prediction and early disaster warning systems.

Simultaneously, ISRO also successfully networked with academia and industry to develop indigenous technologies. In the process, it overcame the technology denials imposed by the developed world, and helped bridge the technology gap with new approaches, concepts and methods. A case in point was the Missile Technology Control Regime (MTCR). Faced with denial of technology, our scientists and engineers in ISRO and the Defence Research and Development Organisation began working on these technologies with a spirit of vengeance.

The turning point in demonstrated technologies was the development of the PSLV. It soon became the workhorse launcher for satellites, with a high success rate. As ISRO launched satellite after satellite, with increasingly heavier payloads, India began to be looked at by the world as a reliable and inexpensive player in the world launcher market.

Today, India has the potential to become the most competitive player in the space business, if the government steps in with adequate funds and political initiative. There is already high demand for more PSLVs and satellites to be launched in the next few years. To meet this increasing demand, ISRO has announced an industry consortium to produce more PSLVs and satellites.

India’s Technology Vision 2020 was developed by 500 experts, working for two years under TIFAC. Their work generated 17 volumes on the roadmap to be followed in various sectors, aiming at achieving higher GDP growth, finding solutions to eliminate poverty, illiteracy, negligence of health, inadequate communication, non-utilisation of valuable natural resources and insecurities in society. Greater emphasis was given to food security, education, health and social security. The routes to achieve these involved creation of better infrastructure, river networking, power-generation, employment generation, and boosting rural economy and focusing on strategic industries. The objective was to realise a developed India by 2020.

The panel headed by Prof U.R. Rao addressed issues with special attention to space programme applications in communication, navigation and remote sensing. The idea was to address social needs, giving an impetus to innovative downstream services, and integrating space systems generated data with socially collected data for sustainable development. To enable use of space technology in multiple government departments, discussions were held with nearly 20 government departments. Every department secretary promised implementation; but very little in terms of results were seen.

A lot more has to be done in integrating rural hospitals with superspeciality hospitals through telemedicine, in imparting quality education and enabling community development and precision farming for increased production of grains. Satellite-based network should be able to help farm produce to reach the market where they can get better prices, and also identify areas where there is shortage. Satellite technology can be used for tracing the availability of water, presence of energy resources, for infrastructure planning in both rural areas and smart cities, for study of climate change pattern, for protection of forest and marine resources and for planning transport networks and systems. These need to be carried out in an integrated manner by government departments. The Indian GPS, Navic, is to be made operational for large-scale civilian and military use. The focus of ISRO has shifted more towards defence satellites, commercial launch services, planetary missions and humans in space. More towards name and fame.

The end of 2020 is expected to witness the success of Chandrayaan-3. India’s first manned mission to space will happen in 2022. The next step will be planning manned mission to the moon, by 2030, and then to mine Helium-3 to be brought in capsules to generate efficient fusion energy. Another important programme could be solar-powered satellites in geosynchronous orbit generating energy continuously. Such missions need large-scale funding, which the government alone may not be able to provide.

Large private industries could become partners to ISRO if they are willing to invest in critical technologies like graphene, carbon fibre, high temperature materials, additive manufacturing and smart systems, and creation of infrastructure and manufacturing of systems. Such partnerships will lead to emergence of a national space industry complex which can make India a space power. For this we need space legislation, which has been pending for quite some time.

The advancement of space ventures in many nations have also brought other security anxieties. These have to be addressed through joint efforts among leading players such as the US, Russia, China, India and Europe. Some of the areas that may be explored are removing orbital debris, setting up space satellite service stations, and developing reusable launch vehicles, advanced propulsion systems and nuclear engines, which can bring down the cost of payload in orbit from $20,000 per kg to $2,000 per kg. Such collaborations could advance the realisation of futuristic missions at shared cost.

The real value of future societal space missions will be realised when we are able to draw energy from space or desalinate seawater using space-based solar power. To realise these goals, we need to develop fully reusable space transportation systems, which can carry heavy payloads. Other technology we need to master include in-flight air collection, oxygen liquefaction, ramjet and scramjet engines, ascent turbojet engines and turbofan ramjet engines, and advancement in high-temperature lightweight materials.

—Pillai was an honorary distinguished professor at ISRO and founder CEO of BrahMos Aerospace. He was formerly chief controller of DRDO.