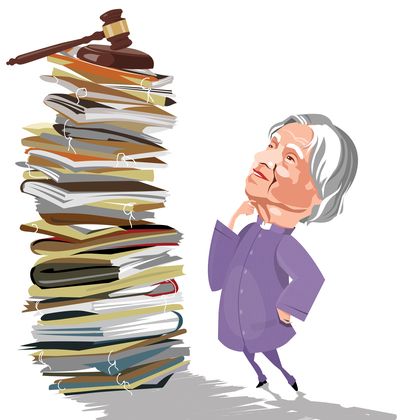 THE WIDESPREAD support for the encounter killing of the four accused in the 2019 Hyderabad gang-rape and murder case is a symptom, albeit an extreme one, of the increasing trust deficit between the citizens and the justice system. The prospect of delayed justice is one of the driving factors of this trust deficit, prompting people to support extrajudicial actions. This shows that the problem of judicial delay has morphed into a social issue with potentially terrifying ramifications for India’s constitutional and democratic structure.

There are 3.1 crore cases clogging India’s district courts. Nearly 21 per cent of these cases have been pending for five years or more. The issue of judicial backlog and delay is widely acknowledged and extensively written about; but it seems to be nowhere close to being resolved. Today, a litigant can be stuck in court corridors for 20 years if a case goes all the way to the Supreme Court. The original litigant may not be alive by the time the apex court resolves the issue. It is a stretch to describe any verdict given after 20 years as ‘justice’.

Apart from the cost to the litigant, these delays imply that judges, particularly those in the superior courts are hearing older cases rather than dealing with current pressing issues. Such delays also favour the illegal actions of one party, while prolonging the violation of the rights of the other. The root cause of this level of pendency is not a shortage of judges—in fact, India is not doing too badly if you compare the judge-to-cases-filed ratio across various countries. The malaise stems from systemic flaws, which have been ignored for decades.

There are issues starting with listing practices. On average, a district judge has about 50 to 60 cases listed before him daily. It is impossible to meaningfully hear so many cases in a day. Multiple adjournments thus become inevitable. This happens every day in each court across the country, throughout the year. The backlogs keep piling up as daily problems intensify over time and become structural problems that cripple the functioning of the institution.

We are fortunate that the eCourts project has made available vast quantities of judicial data. Such a wide availability of judicial data enables us to dive deeper into the problem of pendency to determine specific causes. It helps us identify that the pendency problem varies from state to state and even from district to district. For example, in 2017, the average pendency in subordinate courts in Punjab was 3.9 years while it was 8 years in Odisha. However, Odisha’s case clearance rate is 106 per cent whereas Punjab’s is 99 per cent, indicating that Odisha is disposing of more cases than the number being filed over the year, whereas Punjab is not. Subordinate courts in Gujarat had an average pendency of 9.5 years even though it had a relatively good judge-to-population ratio of 1:53,629.

The causes of pendency range from inadequate staff support and lawyers asking for frequent adjournments to witnesses not turning up and the lawyer being underprepared. There is no one-size-fits-all solution for this problem that can be applied across the country. We need to move towards analysing what factors are choking the system at a district-level to come up with workable solutions.

An urgently needed reform is a separate full-time judicial administration cadre. The judicial system has to empower subordinate judges to deliver timely justice by freeing up their time. Steps need to be taken to maximise judicial time in order to give judges enough time to get through their day’s work. In a time and motion study carried out by DAKSH (a nonprofit organisation focusing on measuring political and judicial performance), it was found that between 45 and 55 per cent of court time is spent on nonsubstantive issues, such as re-issuing summons, fixing dates for future hearings and similar case administration decisions.

Delegating these functions to an administrative officer will give every judge nearly double the time each day for dealing with substantive matters and can significantly improve day-to-day efficiency. Internationally, judicial administration is carried out by dedicated and specialised personnel leaving judges the job of administering justice. The establishment of a dedicated and trained cadre to provide support to the judiciary through case management, assistance with budgeting, handling administrative tasks and ensuring maintenance of court infrastructure will go a long way in enabling the judiciary to focus on the administration of justice.

The most critical mantra is to harness the power of technology to streamline the functioning of the judiciary. The eCourts initiative has been path-breaking in terms of the volume of current data it has made publicly available. However, we are still looking at digitisation as a process to automate manual processes. It is time to move beyond a siloed approach to digital transformation and look at transforming the entire justice system into a digital platform. The judiciary needs to be of the internet and not merely on it.

This will enable the seamless flow of high-quality information between citizens, lawyers, judges and other stakeholders in the justice system. Such a platform will not only be intuitive and natural to use, but will also provide the judiciary with the capability to monitor and respond to its own performance, adapt to present and predicted future demands, and plan accordingly. Implementing these reforms needs a committed and stable leadership at the Supreme Court and the High Courts to carry out the changes and to allay the fears of, and secure the support of, those within the judicial system and the bar.

—Narasappa is a lawyer and co-founder of DAKSH. Verghese is a lawyer, social scientist and research manager at DAKSH.