What could be ‘new’ about the ‘new India’ 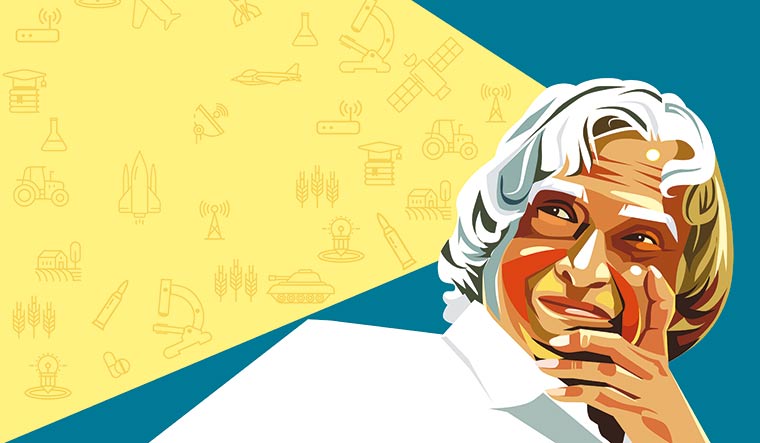 When A.P.J. Abdul Kalam decided to write about the India of the future in the mid-1990s, he had a 25-year timeframe and the term 20/20—used to describe eyesight—in mind. India 2020: A Vision for the New Millennium was published in 1998, during Kalam’s stint as chairman of the Technology Information, Forecasting and Assessment Council (TIFAC). It was written with his friend and then TIFAC executive director Y.S. Rajan. The book was well received as no one had earlier attempted to imagine India as a developed country.

Kalam was well positioned to visualise the contours of a developed India. He was the celebrated project director of India’s first satellite launch vehicle project, the chief of the Integrated Guided Missile Development Programme and chairman of the committee for self-reliance formed in 1993 to reverse the 70:30 import-export ratio of defence equipment. The book focused on five areas—agriculture and food processing, education and health care, information and communication technology, infrastructure development, and self reliance in critical technologies. Later, with Professor P.V. Indiresan, former director, IIT Madras, Kalam expanded the connectivity dimension to rural areas and presented his Providing Urban Amenities in Rural Areas mission.

After being elected president of India in 2002, Kalam made persistent efforts to buttress the spirit of “developed India”. As co-author of his autobiography Wings of Fire, published in 1999, and member of his speech-writing team, I saw him closely, living and breathing the dream of making India a developed nation.

India has indeed developed. But not the way he envisaged. In 2013, he involved me in writing Squaring the Circle: Seven Steps to Indian Renaissance, asking for a perceptional change, a different kind of mindset at the individual and community levels, which he realised was fundamental for a nation, especially a democratic nation, to become a developed country. A change in mindset did happen, to an extent. In 2014, India voted to bring in achhe din. With change in the air, Kalam departed in July 2015, on a hopeful note.

It is indeed evident that in the areas of information and communication technology, reliable and quality electric power, and surface transport and infrastructure, India has done remarkably well. Growth in agriculture and food processing did happen, but benefitted traders more than the farmers. Education and health care have been thoroughly commercialised. Ayushman Bharat has finally arrived, but there is huge trust deficit owing to the inefficient and, at times, horrendous ways of our public hospitals.

However, self reliance in critical technologies has remained an elusive dream. We are mostly importing everything in telecommunication and health care. In fact, the once celebrated Indian pharmaceutical industry is precariously dependent on Chinese raw material. Indeed, this could create a national emergency in case of a conflict between the two nations.

This is a good time to reflect on what a developed India really means. And, if the dream of being a developed country cannot be achieved under a charismatic prime minister leading a majority government with a right-to-centre ideological stance, does this mean that it can never be done? When I try to connect the dots, three points stare at me: an envisaged $5 trillion-economy with unprecedented income-inequality; uncontrolled urbanisation like a cancerous growth and India in the UN Security Council as an ally of the west.

I am not dazed by the clamour about declining GDP, loss of jobs and liquidity crunch. With GST and mounting non-performing assets in the banking sector, there is naturally a liquidity crunch. It is like reduced ability after a major surgery. But there is a need to close down dysfunctional and chronically loss-making public sector companies, clean-up the real estate industry and infuse money into the construction of houses for the poor, provide safe drinking water for all, make agriculture profitable and revamp the financial sector. We cannot be an ostrich society and hide from the fact that black money is back. Big people are not returning bank loans and are protected by the political establishment, irrespective of which political party rules.

India’s aim of being a $5 trillion economy by 2024, from its current size of approximately $3 trillion, is a wonderful dream that must be pursued. But, who would own this economy? During the period the economy grew to $3 trillion from $1 trillion, India saw new wealth accumulated by fewer hands. The number of billionaires rose, while the wages of people (after considering inflation) remained stagnant. India now boasts of 1,000 people with a net worth of more than 01,000 crore and 150 dollar billionaires.

Banks, the engines of an economy, are playing a debatable role. The stories of Punjab & Maharashtra Co-operative Bank, where one company walked away with 70 per cent of the entire deposits as a loan and defaulted, and Punjab National Bank issuing fraudulent letters of undertaking worth thousands of crores, are scary. The NPAs declared by public sector banks are Rs90,000 crore. Are we entering an era of urban dacoity?

Agriculture has become an unprofitable business. Children born in villages are not inclined to ‘waste’ their lives in agriculture; they grow up and go to cities at the earliest opportunity, some for education, but most lured by the glitter of city life. A large number of them settle in slums, and even live homeless and unemployed, sooner or later joining criminal enterprises. Water bodies in cities are encroached upon and used to initially make slums and are later sold as real estate. It happened in Mumbai, which used to be a city of islands, and which now floods every year when water returns to the lands stolen from natural lakes. This trend continues brazenly with no real correction. Everyone is happy accusing others for a problem where they must join hands and do something to bring about change. Every evening, news channels are constructing a collective unconsciousness of division, strife and insufficiency.

India has been under constant attack from terrorism originating in Pakistan. So a close vigil at great cost and effort is necessary. And it is a great impediment to the growth of the Indian economy. China poses another kind of threat. Its massive economy is ready to swallow Indian businesses like a giant python. The country where Chanakya was born has failed miserably in managing its neighborhood in a manner befitting its size and strength. There is a need to break the trend. In the modern world, those who do not take sides get sidelined. There are some subtle signs such as the Logistics Exchange Memorandum of Agreement (2016) and the Communications Compatibility and Security Agreement (2018) with the US. But who wins the next American presidential election would be a decisive factor. The challenge for India is to avoid becoming collateral damage if the US-China relationship goes off the rails.

So, what do we do as a nation? What could be ‘new’ about ‘new India’ that breaks away from the clichés and euphemisms of secularism and socialism, and calls things and processes with their real names? I have an elderly friend Bart S. Fisher, who lives in Washington, DC. Recently, he visited India after 10 years. He said that there is change in the air. Fisher said that it is important to observe what is happening in the US to understand the modern world and avoid the bad choices made there and follow what has been proven good. I find his observation the essence of pragmatism.

The hoopla around the National Population Register and the continuation of arrangements like Article 370 would not have been possible in any other country. Even Aadhaar—unique identity to all the residents of India—was fought tooth and nail. But by the 2019 elections, India shrugged off its self-doubts and through the election mandate, exorcised the ghosts that were haunting it. The political parties that degraded themselves in family enterprises based on obsolete ideologies and bogus sociological identities must resurrect themselves by allowing new leadership to emerge from their cadre.

The three hallmarks of India 2020 are (1) a burgeoning, young and aspirational middle class, (2) a clear right-of-centre political position on the three core issues of national identity, national security and a liberal market economy, (3) a backlash against the forces that kept India enslaved for a thousand years with cunning and deceit, not sparing those who still live captivated by the phantoms of the past. No entity—leader, political party or business corporation—is more powerful than these three forces. The nation stands today at the convergence of these three streams.

Former president S. Radhakrishnan pointed out “serious organic defects” of Indian society that led to subjugation of its masses by a handful of foreigners for hundreds of years. Those defects are very much there. Those handful of subjugators, too, are still around, albeit in new avatars. Whatever you want to understand about India is written in what is going on in its telecom industry, banking industry and agricultural sector. As a democratic country, with the national motto of Satyameva Jayate, India’s model is the US, and not China or Russia.

I find no better words to conclude than the words of Kalam, “India must stand up to the world and act like the country of a billion people living together for over two millennia. Countries of a few million assembled in the last few hundred years can’t decide the destiny of a great civilization.” The doubt that haunts me is the great civilisation myth. The way Indian society treats its women, its children, the poor and people at a socioeconomic disadvantage does not appear to be coming from some great source. Presuming that these are ‘acquired ills’ or ‘imposed defects’, how long are we ready to live these counterfeit lives? What is that great ‘original’ that has remained forever polluted and profane? When Kalam declined to join the 2011 anti-corruption movement, he candidly said, “If a country is to be corruption-free and become a nation of beautiful minds, I strongly feel there are three key societal members who can make a difference. They are the father, the mother and the teacher.” Are we moving in that direction? If not, let us not indulge in fantasies and call them dreams.

—Tiwari is an author and former missile scientist. He co-authored five books with Kalam, including Wings of Fire.