Her fight to be heard

Guru Nanak talked about gender equality, but there is still a lot more to do 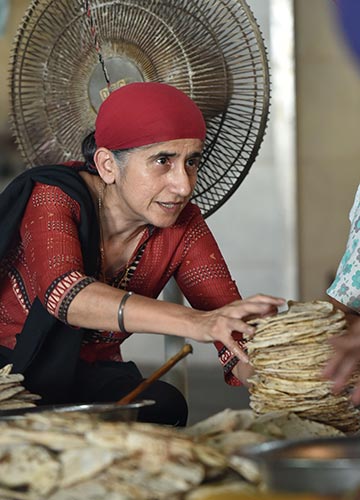 It was no fight, clarifies Mejindarpal Kaur. “It was a natural response,’’ says the internationl legal director of United Sikhs, an NGO, which led the first organised campaign for women to do seva at the Harmandir Sahib. It is post three on a hot summer afternoon. The crowd at the Golden Temple has waned a bit. In the arcades below, on the dazzling white marble, under the fans, pilgrims sleep off the langar and the ghee-laden karah prasad. Mejindarpal sits with her back to the wall, narrating the tale in a pitch-perfect story voice with a very British accent but punctuated with pind-pukka Punjabi.

It had been the end of a long day in 2003, and Mejindarpal had lost her suitcase. “With all my IDs,’’ she says. All she had was chocolate and a box of green tea. She had arrived in Amritsar just as the Guru Granth Sahib was being taken in the wooden palki (palanquin)to rest for the night. She was standing in the queue at the entrance to the inner chamber when she was stopped and asked to step aside. “I could not understand what had happened,’’ she says. But the sevadars told her that women were not allowed to perform palki seva, which involves carrying the palki of the guru when he retires for the day. This sparked a public campaign for equal rights for women at the Harmandir Sahib. It divided the community—between east and west, traditional and modern and on the much-dreaded F word, feminism. In Malaysia, where Mejindarpal is from, women perform every seva.

Gender neutrality—central to Sikhism—is a principle that is repeated with pride. “Several statements of Guru Nanak leave no doubt that he is talking of parity between men and women,” says historian J.S. Grewal. “The highest objective of life from his viewpoint is liberation. This liberation is clearly stated for both men and women. If the highest purpose of life is open to women, then you cannot have more equality than that.”

In 1996, a hukamnama (diktat) by the Akal Takht—the Vatican of the Sikhs—upheld the principle of equality, giving women and men the right to do seva in the Harmandir Sahib. But it is yet to be implemented. The Shiromani Gurdwara Parbandhak Committee (SGPC), which controls the gurdwaras, maintains that there is no bar on women doing seva. But, for example, women can perform kiratn seva at the Harmandir Sahib, usually only by invitation and on special occasions.

Kiranjot Kaur, a former SGPC member, wants to change that. “This is a topic that generates heat,’’ she says. “I think women should do kirtan seva. If they can clean their homes, why not Harmandir Sahib? We do not have women raagis (one who chants hymns) or jathedars (member of the clergy). We should.’’

Kaur, who has been trying to change mindsets for the past two decades, believes that this all stems from the ‘p’ that dwarfs everything: patriarchy. “The men are not following Guru Nanak’s teachings,’’ she asserts. “They have been influenced by the Manu-led concept of women. Guru Nanak was an example of gender equality. He went to live with his sister, which itself was a revolutionary thing to do.”

Her thoughts are echoed by petitions online, started largely by the Sikh diaspora where women perform every seva. The latest petition was put up by Praveen, a high school student in Australia, in 2018. She challenges the SGPC position by citing examples from Sikhism, like that of Mata Bhag Kaur, who singlehandedly went into battle in 1705 and became the bodyguard of Guru Gobind Singh.

But in Guru Nanak’s composition, the ideal wife is put on a pedestal, too, says Grewal. “From equality, we come back to homes, where the institution is unequal. Families, in those days and even now, are patriarchal and therefore unequal. In women, you have this tension between the ideal that they should be equal and the acceptance of the family, which is empirically unequal. How to reconcile these issues?”

It is this gap that is at the heart of the disparity between men and women. The absence of women visibly performing seva is just one aspect of this imbalance. It also manifests on a more serious note in the sex ratio. Punjab, despite being the cradle of Sikhism, has one of the lowest sex ratios—895 women for 1,000 men according to census 2011. 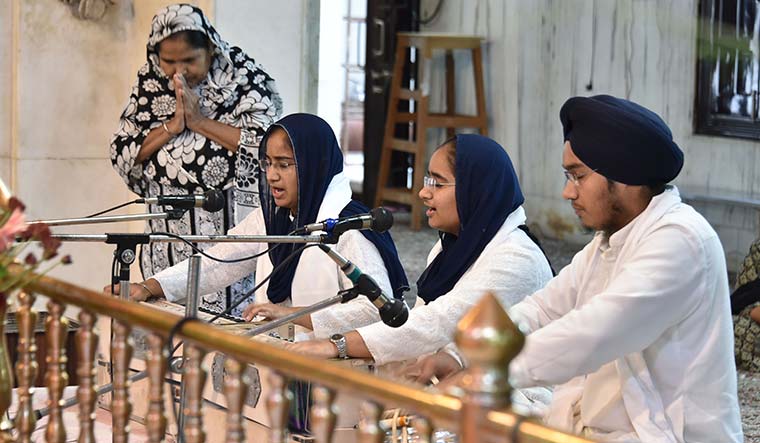 In Canada, which has a significant Sikh population, Jessie Kaur is trying to change the mindset, one story at a time. She is challenging accepted notions of culture by giving women a voice through her Kaur Project. “It was a long time coming,’’ she says. “Women are the backbone of our community. But when you look at history or have conversations, women’s stories are ignored. I think it is quite problematic.’’

A second-generation Canadian, Jessie grew up in a largely white town. “Never really fit in,’’ she says. One day, sitting in a park near her house with her cousin who wore “Indian clothes’’, they were chased by neighbours with lighters wanting to set fire to their hair. This horrific incident sparked off a need to define identity. Her personal journey became a public project.

Viewed through the lens of feminism, the project is also about choice. “Usually men tell our stories for us,” says Jessie. “In the Kaur Project, the difference is that these women get to self identify what their titles are. Some of them name themselves as warrior storytellers. They get to choose that, no one gives them that choice in life.”

The stories are of women trying to fulfil roles assigned by family, about struggles of marriage, expectations, fight for independence, of trying to fit in and about racism, the kind that Jessie faced and more. But each story reflects a deep personal relationship they have with Sikhism, and how faith helps them navigate the world.

Closer home, on another hot summer afternoon, the Gurdwara Bangla Sahib, New Delhi, is packed. Under the multicolour dome—in brilliant blue, a deep maroon and gold—a granthi (priest) rhythmically fans the Guru Granth Sahib. A group of women in white, their chiffon dupattas draped over their heads demurely and their voluminous bags clutched close, stand out from the crowd. Each Wednesday for a few hours, they get a chance to sing out loud the words of their guru.

Jyoti Bedi, younger than the other singers, sits at the back of the huddle. “I have been coming here for 10 years,’’ she says. Bedi was initiated into the group after having to wait for a couple of years before the leader of the group allowed her to sing a hymn in the gurdwara. “The Guru Granth Sahib is like an ocean,’’ she says. “You cannot understand. But if you sing, you find an immediate connection to God.’’

Women being included in daily kirtans is emotive not only on politically correct grounds. Music is an essential aspect of the religion. The Guru Granth Sahib is composed of more than 30 raags. Guru Nanak, who composed hymns, made music part of his daily life. His morning began with singing hymns, and in his 24 years of travel his companion Mardana accompanied him with a rabab.

The gurdwaras may not be whole heartedly open to the idea of having full-time women singers on their rolls just as yet, but beyond their boundaries, there are those who have become favourites on the kirtan circuit. There is a pretty hectic season, especially around the upcoming gurpurab. Amandeep Kaur and Anmol Kaur with their brother, Jaivin Singh, who plays the tabla, are booked in back-to-back appearances. The sessions go into the early hours of the morning.

“I started out by learning music,’’ says Amandeep. “But the teacher refused to teach me after he found out I was left handed.” So, her determination to sing started out with a personal rebellion. “Each night we would go to our neighbourhood gurdwara and sing one shabad [hymn],’’ she says. It became a routine. Now, the trio are regulars at various gurdwaras during the customary women’s hours. Ask her if she wants to sing at the Harmandir Sahib, and Amandeep says, “You always have to prepare for that eventual goal. I keep myself prepared for that. We are hoping one day.”