Congress not in crisis after resignation of Rahul Gandhi: Chhattisgarh CM Bhupesh Baghel

Dantewada victory an endorsement of our policies 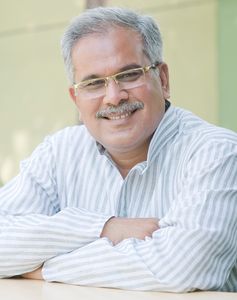 Chief Minister Bhupesh Baghel wants to wage a war against malnutrition in Chhattisgarh. He says the progress of a state is  measured not just in GDP and infrastructure, but the physical and mental well-being of its residents too. Baghel had launched the Suposhan Abhiyan on October 2, on the 150th birth anniversary of Mahatma Gandhi. "The Congress party believes and practises the principle of progress for the last man in the row. This [Suposhan Abhiyan] is a true tribute to Gandhi," he said. After the formation of Chhattisgarh in 2000, many people scripted dreams of a naya Chhattisgarh, but in the last fifteen years, the journey towards accomplishing this dream was rather slow or divergent, he said.   Bhupesh Baghel was the architect behind the 2018 assembly polls success, steering the party through all turmoil. Baghel spoke to THE WEEK. Edited excerpts from the conversation:

Congress won the by poll in Dantewada, a seat held by BJP in Bastar. What message does this victory hold for the Congress?

The victory of the Congress in the Dantewada bypoll is an endorsement of the policies of the government. We had lost this seat to BJP in the assembly elections, but in nine months the party could wrest the seat from BJP—with such huge margin. This is an indication that the public stands with the Congress party and its pro-people policies. Our government raised the Minimum Support Price (MSP) for paddy to Rs 2,500 per quintal from Rs 1,750, the agricultural loans of the farmers were waived, MSP for tendupatta was hiked, and Suposhan, Haat Bazaar Clinic and such schemes had an impact on the lives of the public. 1,764 hectares of land, acquired for setting up an integrated steel plant in Lohandiguda area of Bastar district, was returned to the farmers after the project failed to materialise.

The BJP has accused the Congress of misuse of government machinery in the election. What do you say?
Any party, especially if they are in the opposition, will come up with such lame excuses to save face. In the Dantewada bypoll, 58 companies of the central paramilitary forces were deployed. How can you expect misuse of machinery when such large-scale deployment has happened?

Dantewada and many other districts in the state are affected by Left Wing Extremism. How does your government plan to tackle this menace?
My government is of the view that violence perpetrated by a few misguided people cannot be tolerated, and it is no solution to the problems. Trust, development and safety, we believe, can help attain normalcy and peace in the region. As part of this exercise, the government has ensured that adivasi and other communities residing in the region get their rights. We have implemented the Forest Rights Act. Our government is of the view that the people who are booked wrongly under accusations of naxalite activities will not be prosecuted, and a decision will be taken on the recommendation of the review committee set up for naxal cases headed by former Supreme Court judge A.K. Patnaik.

Do you believe in dialogue with naxals to end the menace?

There is a precondition for talks. The naxals should shun violence, and talks shall only be possible within the ambit of the Constitution. There is no room for violence of any sort.

Recently, you said at an international forum that you support the prime minister. Will that support be conditional on the domestic front?
For Congress and workers of the party like me, nation comes first, and we are with those who speak for the nation. The prime minister speaks on behalf of 125 crore people of the country in any international forum. In the domestic front, we, as a responsible opposition, will be vigilant and oppose all anti-people, anti-democratic and anti-secular policies of the Modi government.

Do you think India has been benefitted from the Howdy Modi event at the US?
It was more event management. The prime minister must tell the people what benefit India has accrued from this event. This was more an election campaign for President Donald Trump. No MoUs in any sector were signed. The prime minister owes the nation an explanation.

After the defeat in the Lok Sabha elections, the Congress party faced a leadership crisis. Is the crisis over now?
The Congress party, led by Rahul Gandhi, had put up a strong fight in the Lok Sabha elections. But,the results were not as anticipated. No Congressman pointed fingers at Rahul Gandhi as they knew he had put in great effort and hard work, traversing through the length and breadth of the nation. The young Gandhi showcased high moral value when he decided to quit as party president. No party worker ever wanted Rahul Gandhi to quit, but it was his decision and we humbly bow before it. The decision did not pull the party into any crisis, but party workers were saddened. With Sonia ji taking over as the interim president, this distraught feeling among the party workers has evaporated.


You have only been ten months in power, but have launched more schemes than any other government. Will the schemes be implemented well to benefit the people?

Our government's policy is holistic development of the people. Presently, 37.6 per cent of the children below five years of age in Chhattisgarh are suffering from malnutrition and 41.5 per cent females in the age group of 15-49 years are suffering from anaemia, and nearly 40 per cent of the population live below the poverty line. We launched the Mukhyamantri Suposhan Abhiyan to eradicate malnutrition and anaemia from the state. Under-nourished children, anaemic girls and women are provided freshly cooked nutritious meals. Similarly under the Chief Minister Haat-Bazaar Clinic Scheme, a mobile health department team, including doctors with necessary equipment, conducts health checkups, blood test and provides medicines. This has helped people in far-flung tribal areas avail healthcare services.

What is your concept of development in Chhattisgarh?

My concept is to secure people with good health, education and employment for their holistic development. In the last 19 years, many new structures came up, but there has been no improvement in the life of the people. We are changing the pattern of development. You will see that strengthening the rural economy and keeping farmers debt-free has made a deep impact. Even when there is recession all over, Chhattisgarh is untouched by it.