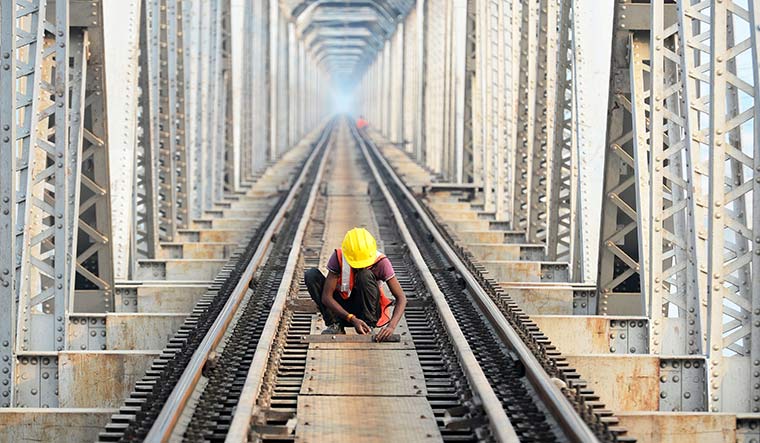 Engines of growth: A railway bridge being built over the Ganga in Allahabad. Addressing concerns about infrastructure development is crucial in tackling the slowdown | AFP 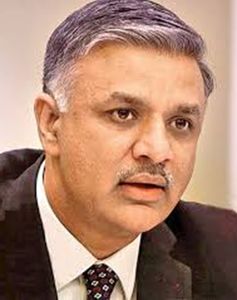 THE MAJOR CHALLENGE before any policymaker is to find ways to overpower negative expectations by harnessing the collective, productive and constructive energy in the economy and leveraging that to boost growth. The recent stimulus packages announced by the government need to be seen in that light.

Given the global recessionary conditions and the post-liquidity crisis management, the government has come up with a new strategy, which is addressing the sectoral challenges, both at the national and at the sub-national levels. It was a swift course correction to counter a growth recession and capital flight by bolstering investor sentiments and shoring up consumer demand. It is also a confidence booster, especially since the RBI and the government are on the same page in this regard.

Following the stimulus package announced on August 23, two more seem to be in the offing. These could be to address the concerns of sectors including construction, housing and real estate as well as tourism, textiles, electronics, single-brand retail and infrastructure that are not only facing a slowdown, but also are employment-intensive.

What will also help is the RBI giving Rs1.76 lakh crore, which is a clear gain for the government for further deepening the economic fiscal measures. The Economic Capital Framework recommended by the Bimal Jalan-led committee has settled the future transactions in a manner that would largely be within a framework. The range of Contingency Risk Buffer and the quantum to be given through dividends and the fact that 20 to 25 per cent of the balance sheet is to be safeguarded against any kind of risk have kept fundamentals intact and the exposure norms well defined.

Given this background, it is important to look at the positives. For instance, exports from a sunrise sector such as electronics surged 39 per cent to a record $8.9 billion in FY19, as against 12.3 per cent the year before. Domestic mobile manufacturing is going from strength to strength. In the last 3-4 years alone, 268 units manufacturing cell phones and its components were set up, providing direct and indirect employment for 6.7 lakh people. To address the concerns on import dependency in the electronics sector, the report of the ‘Working Group on USD Five Trillion Indian Economy’ had suggested measures such as correction of inverted duty structures in custom duty and GST rate structures and earmarking clusters including Coastal Economic Zones with flexible labour, environment norms and easier clearances.

It would be important for the government to give greater attention to sustain and enhance sunrise sectors such as electronics, semi-conductors, solar panel manufacturing and electrical vehicles manufacturing. Focus on these sectors would help achieve goals including catering to domestic demand, reduce the dependence on import and boost exports through local employment generation.

The other component that would need greater focus is India’s exports sector, which is facing numerous challenges including those related to the growing protectionism, trade wars, sluggish demand in many markets overseas and competitive depreciation of currencies of countries including that of China, which makes their exports more competitive. In this regard, the measures should include incentives to help exports expand to non-traditional markets. Work is already under way to double India’s exports of goods and services to $1 trillion by 2024-25.

However, there are sectors such as automobile that are experiencing deceleration, and the government has rightly targeted stimulus measures to address the related concerns.

On the monetary side, there is now an institutional mechanism of linking the repo rates and lending rates to ensure transmission of the benefits of lower interest rates to borrowers, including from the Micro, Small and Medium Enterprises segment. It is now for the banks to make sure that liquidity is made available to MSMEs and other sectors. There should be continuous monitoring of this transmission mechanism. The RBI has made Prompt Corrective Action framework a crucial aspect of its financial stability framework. The 3R system—‘recognition’ (of bad loans), ‘reforming’ the banking system and ‘recapitalising’ public sector banks—has been the hallmark of the approach by the government and the RBI. The upfront capital infusion of Rs70,000 crore will now have to be channelised to MSMEs and larger firms to create a strong supply chain, and not used to improve the PSBs’ adequacy norms.

Other measures such as withdrawing angel tax norms for start-ups and their investors, treating corporate social responsibility violations as a civil liability and withdrawing the enhanced surcharge on long- and short-term capital gains arising from transfer of equity shares or units should go a long way in restoring investor confidence and countering the trend of FPI (foreign portfolio investors) outflows in the equity market that had crossed $3 billion in the July-August period.

While the attention on fiscal discipline is welcome, this has to be balanced with an approach to create greater demand through investment that will facilitate trade and better infrastructure. The focus also has to be on reducing the corporate tax burden for small and large firms, to in turn boost manufacturing and exports. It is time to go in for a paradigm shift from a broad approach to a narrow sectoral strategy by identifying certain champion sectors and providing the necessary stimulus to create value chains for rejuvenating the entire economy.

The author is director general, RIS, Delhi. Views are personal.