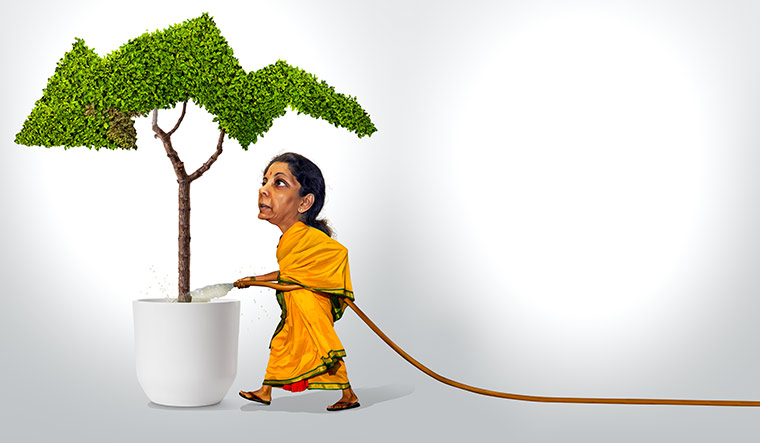 The relief measures announced by Finance Minister Nirmala Sitharaman on Saturday were the outcome of her recent tête-à-tête with housing developers and exporters in North Block. Instilling a sense of continuity in the government's intent to achieve structural changes to reverse an economic slowdown, the finance minister said that these measures would help boost demand for Indian goods abroad and one's own house.

Sitharaman made a major announcement on the restructuring of the export tax incentive scheme for exports of goods and services. The new tax ROTDEP (Remission of Duties or Taxes and on Export Products) would replace two present schemes, the Merchandise Exports from India Scheme (MEIS) and Service Exports from India Scheme (SEIS). The Trump administration had red-flagged these Modi government schemes and was red-flagged to the WTO last year by the US Trade Representative.

Come January 1, 2020, these schemes would be replaced by the ROTDEP and exporters would no longer be able to claim incentives under the MEIS or SEIS.

"This new scheme would help exporters overcome the problem of increased tariff barriers faced in recent times. It would also be WTO compliant," said Alok Vardhan Chaturvedi, DGFT. An estimated Rs 50,000 crore of support would be distributed among exporters under the ROTDEP scheme. However, Sitharaman is not ready to deem this as a stimulus. "This is a support to our exporters. It's not a dole," Sithraman reminded at the press conference.

The government maintained that this outgo of funds would be similar to what was being undergone in the earlier export duty incentive schemes of the Department of Commerce-run Export Credit Guarantee Council (ECGC). "The outflow would be around Rs 45,000 cr, which is similar to what it is today," said Vardhan.

Under the MEIS and SEIS, exporters were able to receive remission of two to five per cent of the duties and taxes paid in other countries. Exporters said that the fact that the government is yet to announce the rates of remission of duties available under the new scheme, casts doubt if the facilities will be similar.

"We expect the new ROTDEP scheme to more than adequately incentivise exporters than the existing schemes put together," said Sharad Kumar Saraf, president, Federation of Indian Export Organisations (FIEO). The DGFT clarified that he would consider sector by sector and destination by destination for exports, to arrive at the rates of relief that could be afforded. "We will go through this one by one and decide the rates," Vardhan said at the briefing by Sitharaman.

Other export boosting measures flagged during the meeting with Sitharaman by export bodies, was that credit flow to exporters had come down by 35 per cent over the last one year. Sitharaman took heart to this matter and faced strong criticism against banks' attitude towards exporters, expressed by all export bodies who met her in North Block last week.

Among new measures to boost export credit, the finance ministry, with the help of the commerce ministry, has identified some priority export sectors. Sitharaman said that she had already been in discussion with the Reserve Bank of India on this. "They are on board to release banks additional Rs 36,000 cr to Rs 68,000 cr for credit to exporters under the priority sector lending category," Sitharaman said.

She said that this additional cash sanction would be an additional impetus for exporters. Loans to exporters by each bank would be monitored by an inter-ministerial working group under the Department of Commerce.

One of the major grouse of exporters in the last two years of GST implementation was the inordinate delay in the release of their Input Tax Credit refunds. ITC refund arrears due to exporters had touched a high of Rs 60,000 crore earlier this year. Today, Sitharaman assured that refund issuance would be digitised from this month and all dues would be speedily cleared.

"Implementation of a fully automated and electronic refund module would help exporters to receive a speedy and timely refund of their GST but also their long-pending ITC refunds. This would mitigate their working capital requirements," said Saraf of FIEO.

"These measures would boost India's services exports which too are facing the heat of global tariff warfare. The ROTDEP scheme would ensure the viability of service exports under this scenario and the priority sector credit if available to service exports, could provide an additional fillip to all of the government's efforts to boost exports," said Sangeeta Godbole, Director of Service Exports Promotion Council of India (SEPCI) formed by the Commerce ministry.

In recent times India's service exports have been a bone of contention at trade talks like the RCEP, ASEAN and during trade negotiations with the US recently.

For housing, Sithraman today opened not just the government's purse but also the private investor's wallet to rescue the sector ailing for the past several years under the Modi government. The additional support she offered was to increase the National Housing Board's budget for providing credit to housing sector NBFC's by Rs 10,000 cr from her budget-announced levels to Rs 30,000 cr now.

A special window to provide a last-minute push to incomplete housing projects was also announced by Sitharaman. This window would admit only solvent housing projects and would have a similar contribution from private and foreign investors. "This would provide a push to developers who are facing difficulties finishing their committed projects," Sitharaman said at the announcement.

The government estimates that this would benefit 3.5 lakh housing units which are stuck for completion. So far, there is more than one independent assessment which cites that more than 14 lakh housing units remain incomplete by housing developers. Close to Rs 3.4 lakh crore worth of housing development projects and a majority of the unfinished housing projects is stuck under the insolvency processes of banks and courts.

"This would allow solvent projects to apply for this window and avail credit at a discounted rate. You must appreciate that other projects are already following a resolution process under the NCLT or NPA," said Atanu Chakraborty, secretary, department of economic affairs, finance ministry. Housing projects worth more than Rs 70,000 crore are stuck under a court or bank-led resolution process in the National Capital Region (NCR) alone.

Both the National Company Law Tribunal (NCLT) and the bank-led NPA processes to admit buyers claims as operational creditors. However, it has been seen that operational creditors though favoured admission in the claims from a bankrupt housing developer are often forced to take a large haircut from the actual sum paid by them to builders.

However little it may be, these measures would help improve the sagging sentiments prevailing in the housing sector, experts believe. "Fundraising by banks and NBFC will help improve liquidity considering the global monetary easing and low-interest rates. Considering that India's developer's loan by NBFC and HFC (housing finance corporations) are still more than Rs 2.5 lakh crore we believe both these measures are a big positive," said Abhimanyu Sofat, research head, IIFL Securities.

Last but not least, Sitharaman ensured that government employees, too, leave their imprint to revive the sagging economy. Government employees will now receive housing loans at a lower than the market rate (linked to G-Sec rates) and can improve demand for houses, the government hopes.

India's quarterly GDP growth had slowed to a six-year low of five per cent compared to 5.8 per cent last year. The lower numbers had surprised multilateral organisations like the International Monetary Fund (IMF). Domestic economists point towards a lack of consumer demand and a lack of investments worsening the impact of the current economic slowdown. Both the measures announced today are less likely to either directly revive consumer demand or improve investment levels.