A gaunt, greying man whose rib bones can be numbered. But his face has a confident, wide smile; his eyes have a certain mystique. THE WEEK cover features a Gandhi who is far away from a cinematic image. This Gandhi on canvas was created early this year by the celebrated artist Riyas Komu, who was inspired by a 1931 photograph of Gandhi in London. Titled Oru Jathimadam, the 6x5ft oil painting has the “fakir standing defiantly against a violent world”. Komu talks about his major works on Gandhi. Excerpts:

What did you learn about Gandhi while researching for your paintings?

The most important thing in Gandhian actions is the way he trusted God as witness. We all know how he reversed the statement ‘God is Truth’ into ‘Truth is God’ while conversing with an atheist. He said: “I see and find beauty in truth or through truth. All truths, not merely true ideas, but truthful faces, truthful pictures or songs are highly beautiful.... Whenever men begin to see beauty in truth, then true art will arise (Young India, 13-11-1924).”

In our ‘post-truth’ times, it is compelling and incumbent upon us to revisit Gandhi’s engagement with the idea of truth as a witness or as a measure and test of every human act. Another significant thing that amazed me was the way he treated ‘the other’ vis-a-vis his self. The legacy Gandhi gave us is that of nonviolence, and India as a nation is built on such a legacy. The crisis [that] the idea of ‘Gandhi’ is now facing is not only political but also deeply religious.

Deeply influenced both by Indian traditions and western modernity with all the challenges both posed, Gandhi’s struggles and experiments with truth were directed within and without. So, today I search/re-search Gandhi amidst people. 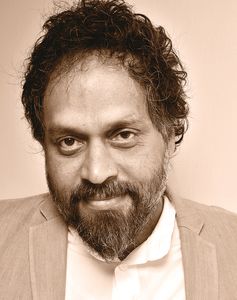 Gandhi/sm becomes all the more significant in two more ways: as to what it contains or points to as well as the ways in which it opened itself out to the world, life and nature. Gandhi inspires me because the very act—creation/making—was at the core of his scheme of things. For Gandhi, action was the way of imagining. In other words, acting was a spontaneous expression of imagination for him. My journeys and research through various manifestations like the scriptures, texts, philosophies and images, are to enable us to imagine while acting and vice versa. In my art, I work towards imaging and imagining a different world where life is more humane and wholesome, rather than oppressive, divisive and alienating.

In your work ‘Gandhi from Kochi’ (2015), which is again a series of paintings inspired by the same 1931 photograph, you showed Gandhi in a revolutionary red background.

The infamous words of Churchill in 1931 testify Gandhi as a thorn in the flesh of the British empire: “It is alarming and also nauseating to see Mr Gandhi, a seditious Middle Temple lawyer, now posing as a fakir of a type well known in the East, striding half-naked up the steps of the Viceregal palace, while he is still organising and conducting a defiant campaign of civil disobedience, to parley on equal terms with the representative of the King-Emperor.” The 1931 photograph shows a fakir standing defiantly against a violent world. Gandhi was mainly a creator, and not a destroyer, and hence his image in red is an invocation of synergies of undying hope, unending conversations, continuous learning and experimentation.

‘Get a Dark Cloud Free’ is a triptych of three 6x5ft paintings on canvas in oil, the medium I always use. On the left and right are the half face of a smiling Gandhi, like a cloud stretched by wind. In the middle, from the Gandhi face of dark clouds there emerges a surge of light, of sunset.

Gandhi projects are my experiments with time. Very explicit and open as against secrets and closures; I salute Gandhi for being around, as a beacon, warning and provocation. I want in my expressions the ideational coalescence and also the ideological conflicts of three generations before me, in order to get out of the orphanhood of my generation and seek new belongings. I grew up as the son of a Gandhian who was a communist. My father’s ideals of life and living drew from all these fronts and it was he who taught me to stand by truth. People called him “Insha Allah Komukka”.

‘Dhamma Swaraj’ is a conversation. Conceived as a proposal in the making, it is an experimentation to invoke dialogue between individuals, ideas and practices, various kinds of philosophies and politics.

Give us insights about other major artists who have explored Gandhi in their works.

I have always admired Gandhi as an extreme minimalist. He is the most photographed icon in the world and I like all the photographers who shot him with great respect and admiration. Ben Kingsley, not much known as a half-Indian born to a Gujarati father, re-lived Gandhi on the silver screen with great ease and grace. I think one of the monumental works on Gandhi’s legacy is the one by D.P. Roy Choudhury in Delhi. A painting by Feliks Topolski, a Polish artist who spent a short time with Gandhi, almost predicts Gandhi’s assassination. Nandalal Bose’s lived experience in the Gandhi era has given his art its minimalist flights. The recent work produced by Eduardo Kobra, a Brazilian graffiti artist, on Churchgate station [Mumbai] facing the multitude that marches every day to the local trains is very symbolic. Among our contemporaries Atul Dodiya’s ‘Conversations with Gandhi’ through his fluid works is a great archive in the making.