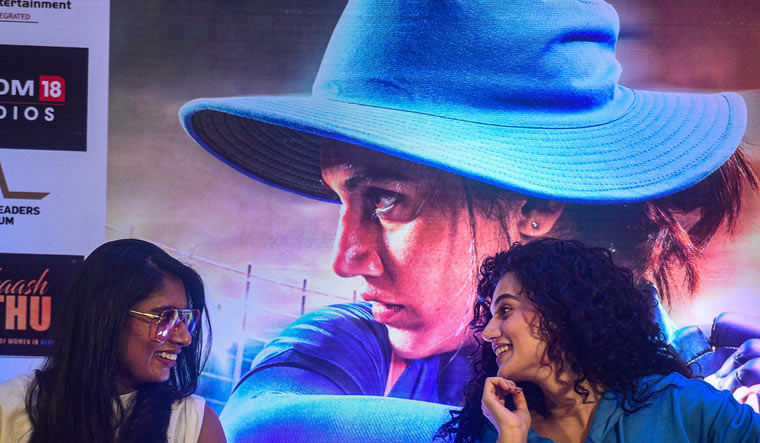 Picture this: A little girl, no more than eight or nine years old who is also a budding cricketer is being coached into footwork, necessary for batting well. Despite being repeatedly told not to move her hind leg when batting, she does exactly that, more as a result of involuntary reflexes. But the coach, unnerved and anguished, goes to this girl with a nail in his hand and impulsively without batting an eyelid hammers it in her shoe so as to teach her a lesson. The girl does not as much let out a shriek, instead continues to play in form, exactly the way he wanted. Ball after ball, she does that through the entire session and nobody utters a word. Not even her parents who bandage her, mutely.

In Taapsee Pannu-led Shabaash Mithu, we are told this little girl is a young and unassuming Mithali Raj and such was her mental and physical grit that a nail hammered on her foot would evoke no reaction except for an inaudible, almost muted 'Aah!' The film has a number of such hard to believe, seemingly highly exaggerated instances that will make you wonder if this must really have happened or is it just the filmmaker's figment of imagination used to sensationalise and sell the life story of India's youngest woman who made it big in international cricket. Take another instance: a teenaged Mitthu gets into the Women's Cricket Board as a new joinee and is bullied by her peers to the extent that they deprive of a glass of water after an extensive morning of practice and on a day she feels under the weather.

Yes, there are bits and parts in the film when one is bound to feel that the scriptwriters simply went overboard, but most times the human drama does pull at your heartstrings. It is heartening to see that the film not only gives a peek into the ambitious and very eventful life of Mithali Raj but also takes a bold stance on issues of gender parity, the place of women's cricket in a men's cricket loving nation and patriarchy that still seems to dictate women's choices when it comes to marriage and pursuing a career in competitive sports. Pannu is electrifying on screen and at no point does her own starry persona overshadow that of Raj's rustic and sporty charm.

Ever since Raj made it big in international cricket, Pannu felt there was a karmic connection between the two, given how similar the two were to each other. "We both enjoy sports; I played almost every sport while in school and continued with squash, sprints and a few others in my adult life too. But more than that it was the fact that both of us stood our ground when it came to speaking up for women's rights in sports and other areas that i saw the similarity in us more starkly," said Pannu in an interview to THE WEEK. While Raj spoke against male dominated cricket, Taapsee has been vocal against a male-dominated film industry. Yet, the two women are total opposites of each other, temperamentally. "She is demure and quiet, I'm impulsive and a total chatterbox," said Pannu in the interview, with a big, wide grin. Both, the similarity and the difference between the two is very evident in the film. And in that sense, Pannu has seamlessly gotten into the skin of Raj's character. She appears to be controlled, firm and headstrong. Yet, there are times when it hits you that may be the actress could have been shown to internalise the sports star's true complexion instead of appearing many shades fairer than Raj actually is. Why this obsession with a white complexion? and especially why when you're portraying an international cricketing icon's journey? Some questions remain unanswered.

Yet, Shabaash Mitthu is worth a watch, especially for its very gripping first half, most of which is pulled off by the child artist Inayat. She is adorable and so expressive that even if the entire film was centered around her as the subject, it would have made for a very enjoyable watch. The movie is far too stretchy and towards the end of the second half, it becomes a bit boring and tedious to stick around. No, not even the cricket coverage comes to the rescue. It goes so fast, that you want to take a shut-eye and come back once the match is over. Yet, the story of Raj remains inspiring as ever. If you must watch the film, watch it for her.