Puzhu review: Mammootty a class apart in this slow-burner 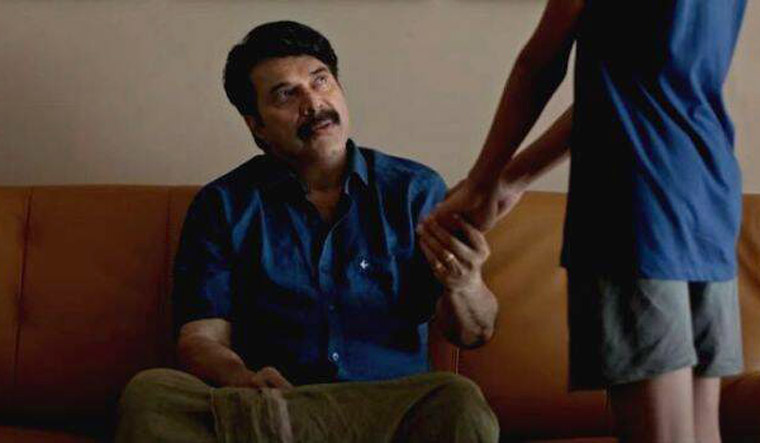 “Is tomato a fruit or a vegetable?”

Puzzled? If you haven't reached for Google baba already, you have my respect! Some questions leave you groping in the dark. And at times, you find the answers in the darkness of your heart.

Ratheena's Puzhu (worm) is about this darkness in people's hearts and minds, where they hear what they want to hear, see what they are accustomed to seeing and believe what they have been taught to believe. The title of the film and the trailer had piqued the curiosity of the audience. What also caught the attention was the coming together of Mammootty and Parvathy, post their Kasaba episode.

The wait has been rewarding. Puzhu talks about a socially relevant theme, which has often been spoken about in hushed tones in this part of the world, at the right time. The film is, in fact, quite different from the first impression one gets from the teaser and trailer. Yes, Mammootty (Kuttan) plays a retired police officer and a strict father and Vasudev Sajeesh Marar (Kichu) portrays a terrified son, who is squirming under his father's unforgiving and relentless watch. But Puzhu is much more than a family drama. Revealing anything more about the plot will be spoiling the experience for the viewer.

Harshad wrote the script with Mammootty in mind, the director had said in an interview. So, what if he had refused this role? But he didn't. And that's where Mammootty the actor stands out. The first few minutes into the film, we realise Kuttan is a man people love to hate, but step into his shoes, and the world seems just the way he sees it. The veteran actor delivers yet another master-class in acting in a role his contemporaries might steer clear of. The conflicting emotions inside Kuttan are portrayed brilliantly by Mammootty. The climax might have suffered a bit from predictability, but his performance in the last 20 minutes or so, shows why Harshad had only him in mind for the role.

Interestingly, and fittingly, Puzhu is not all about Mammootty or even the brilliant-as-usual Parvathy. Appunni Sasi as Kuttappan delivers a stupendous performance. Not only is he measured in his craft, but supremely confident—a trait which works wonderfully well for the character Kuttappan. Young Vasudev, too, impresses with his naturality and originality.

Standing shoulder-to-shoulder with the actors is Jakes Bejoy's music, which is a star in its own right in the film. It skillfully dives in and out of the narrative, which is subtle and matured. The narrative takes its time to set the stage, literally, and mythology is brilliantly woven into the contemporary storyline. It's a slow-burner, but it's probably a deliberate ploy by Ratheena. The debutant director, who has worked as an executive producer, assistant director, poster designer and production associate among others, has shown she is here to stay.

And to cast the legendary actor in a negative role needs courage more than anything else. Mammootty has rarely done characters with negative shades—the notable ones being in Vidheyan and Munnariyipu. But when he has, they have stood out. Kuttan is no different.

Tailpiece: Tomato is both fruit and vegetable, says Britannica. Was Kuttan, too, both right and wrong? Only the puzhu knows.